The owner's neighbors have been throwing fits about the car and saying no one wants to see it "every time they look out their window." 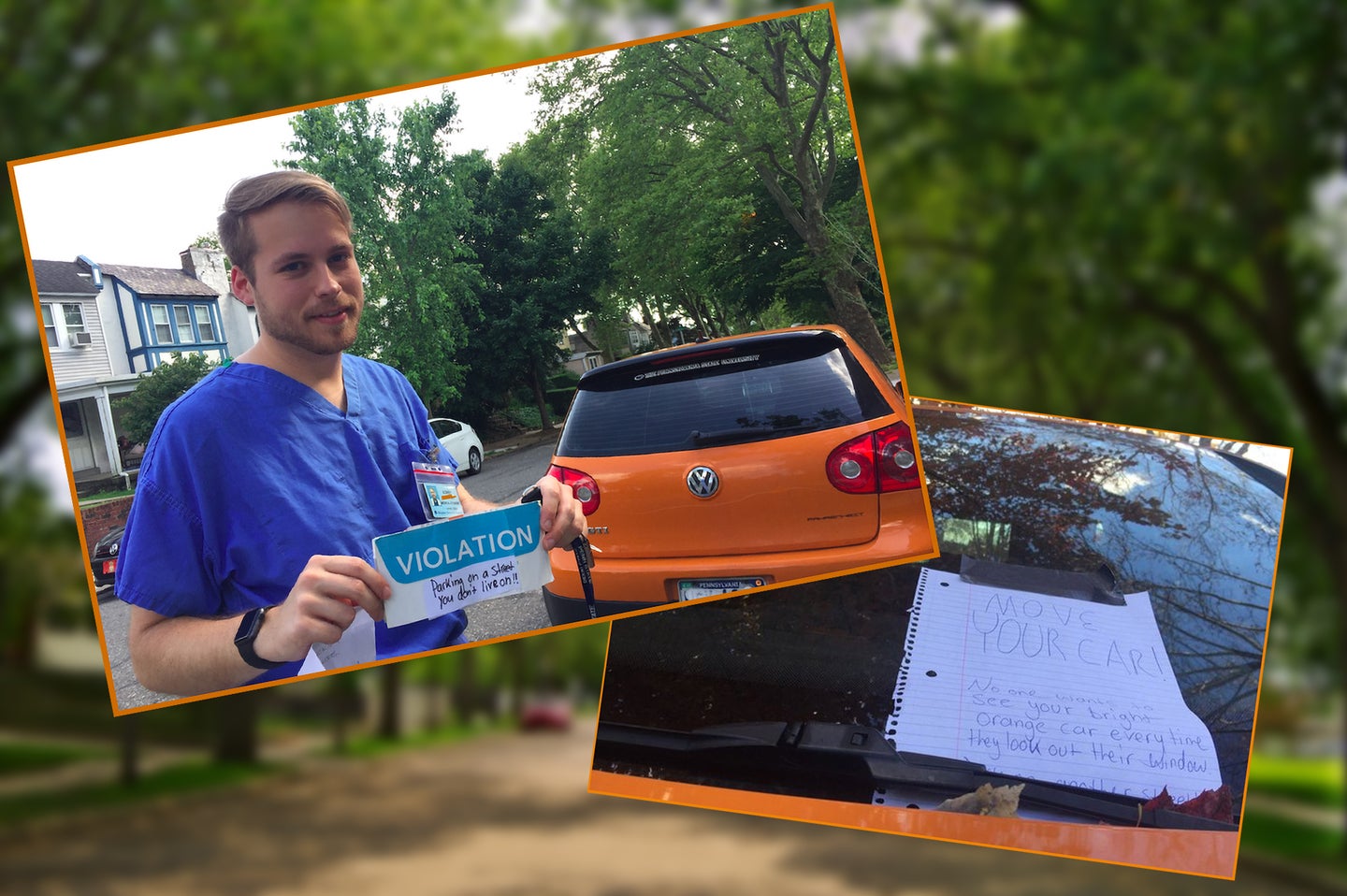 Annoying and obnoxious neighbors are one thing, but vandalistic ones are a whole different ballgame. The owner of an orange 2007 Volkswagen GTI Fahrenheit Edition has been the victim of some passive aggression after an anonymous neighbor vandalized his hot-colored car, supposedly out of distaste for its bright hue.

Korey, the owner of the GTI who lives in Philadelphia's East Falls area, one day came back to his parked car with a note tacked onto it reading: “MOVE YOUR CAR! No one wants to see your bright orange car every time they look out their window. Park on another street. You have no right to park here.”

Except, Korey does, as he lives near the 3300 block of Ainslie Street where the incident occurred and has the proper permits to do so. He also parks on Ainslie because nearby Henry Avenue is supposedly an incredibly busy thoroughfare and he worries about his car being damaged, particularly after a Penske truck crashed into his neighbor’s home.

To make the issue even more interesting, Korey told The Philly Voice that he initially was approached by a random woman who vividly spoke out against his orange GTI.

“I was confronted by a woman with a small dog who lives on Ainslie about where I park my car. She said, 'In this neighborhood, people park in front of their own homes,'" Korey said to the outlet. "It seemed she didn't like the color of my car. She seemed to already know where I lived, which I thought was strange.”

After the first couple of altercations, things quieted down, but then picked back up again several years later. This past spring, someone sprayed white paint over his Pennsylvania plates and to make matters worse, someone keyed his car later that week.

Korey reported the problems to the police and even shared the name of the person who he believes is responsible. But the police are unable to do anything against the petty acts because there’s no hard evidence or proof. He hopes he can catch the person red-handed and press charges. Korey also called upon neighbors to keep an eye out, but so far, nothing’s come from the requests.

Then once again, more recently, someone placed a fake “violation” sticker on his car with the words, “Parking on a street you don’t live on” handwritten on it.

Korey also isn’t the only victim to vehicular vandalism on Henry Street as another neighboring tenant received a threatening note and what appeared to be urine on the door handle.

Although frustrated, Korey wishes to continue on with his studies as a med student.

"There are bigger problems in the world than worrying about where someone parks their car, or what color someone else's car is," he continued. "If you don't like the color of my car, I respectfully don't care. You can take it up with the police."

This isn’t the first time the automotive world has seen this sort of backlash against a car owner, all because of its exterior hue. A man in the U.K. received a lot of heat for his bright yellow hatchback supposedly ruining the picturesque landscape of the Cotswold Village in Gloucestershire.