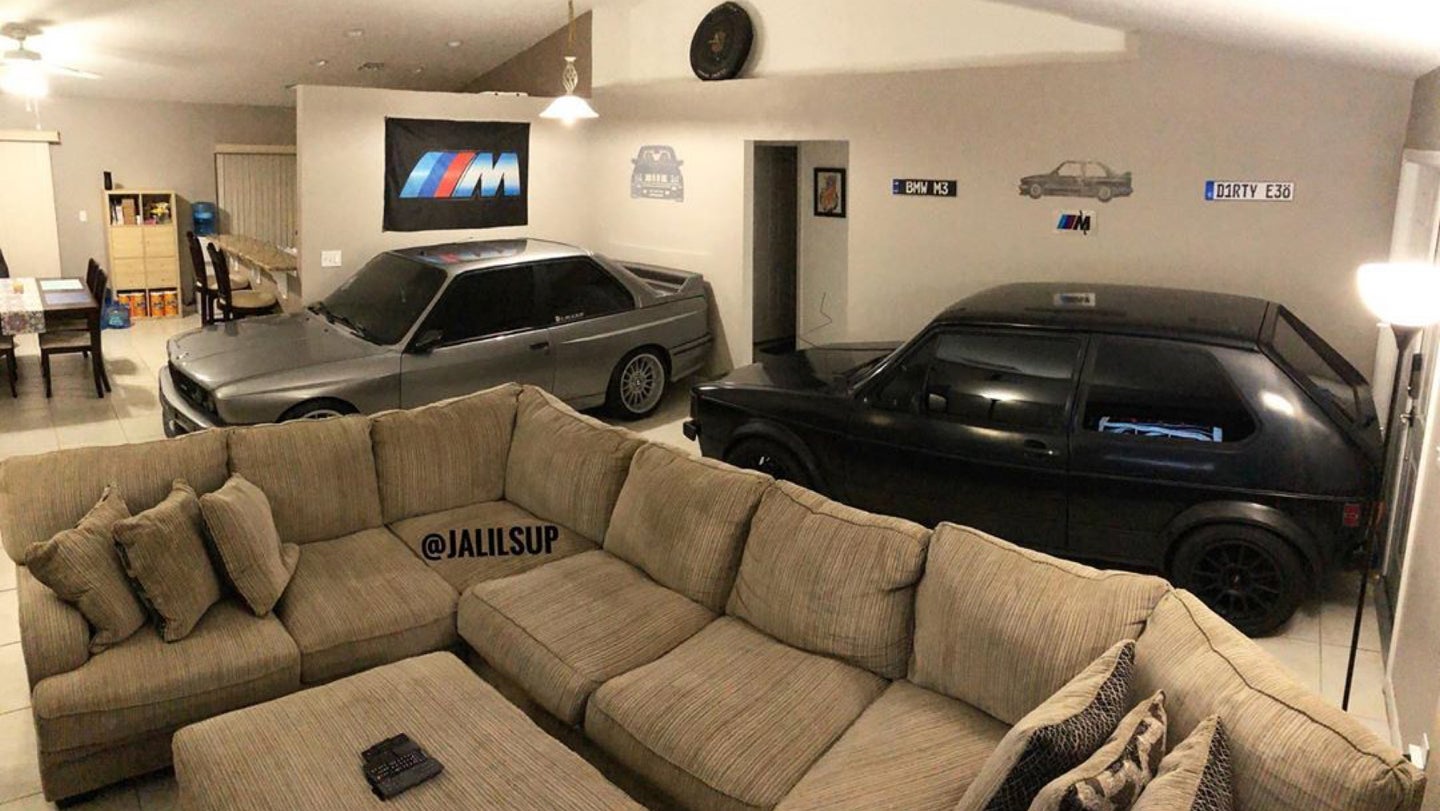 If anyone is living proof that all homes need doors wide enough for beloved classic cars, it's Randy Jalil. Jalil won the hearts of car fans across the world when he stashed his E30-generation 1988 BMW M3 into his living room back in 2017 as Hurricane Matthew threatened Florida. This year, he did it again, with a friend's Volkswagen GTI joining the M3 to ride out Hurricane Dorian.

Jalil offered up his garage space to his girlfriend's 2018 Chevrolet Malibu and his brother's 2018 Toyota Corolla, opting to stash his classic M3 in his living room once again. Yet this time, he was able to squeeze in his friend Keith Pomeroy's 1984 Volkswagen GTI in with the M3. That's right: two cars in the living room.

"Nothing fancy, just wanted to protect as many cars as possible," Jalil told The Drive. "My girlfriend Amber Carpenter was completely for putting the cars inside the house because she knows how much I love my cars!"

Jalil measured his front doors a couple years ago to see if the M3 would fit, and sure enough, they opened up to 73 inches wide—just a hair wider than the BMW, according to Jalopnik. Pomeroy also helped him squeeze in the M3 the first time, so finding space for Pomeroy's smaller GTI was no problem.

Both cars were ultimately fine, as Dorian pretty much skipped over Florida.

"Luckily, we didn't get any damage in Port Saint Lucie where I reside," Jalil told The Drive. "There was barely any rain, too. Thankfully, everything around the house survived. I do have to admit it's a stressful time waiting to see where this hurricane was heading and how bad the damage could have been."

Fortunately, Jalil was prepared, just as he was two years ago, and willing to take in extra cars to make sure everyone's ride was safe. Putting the cars in the living room was a solid plan when the storm was slowly building in strength off the coast of Florida.

At this point, perhaps “doors and interior space wide enough for an M3” and "load-bearing floors that can handle a few cars" should be added into Florida’s building code. Jalil isn't the only one over the years to try squeezing an extra car into their living space to keep it safe, nor is he the only one who's gone to crazy lengths to protect their cars when foul weather hits.