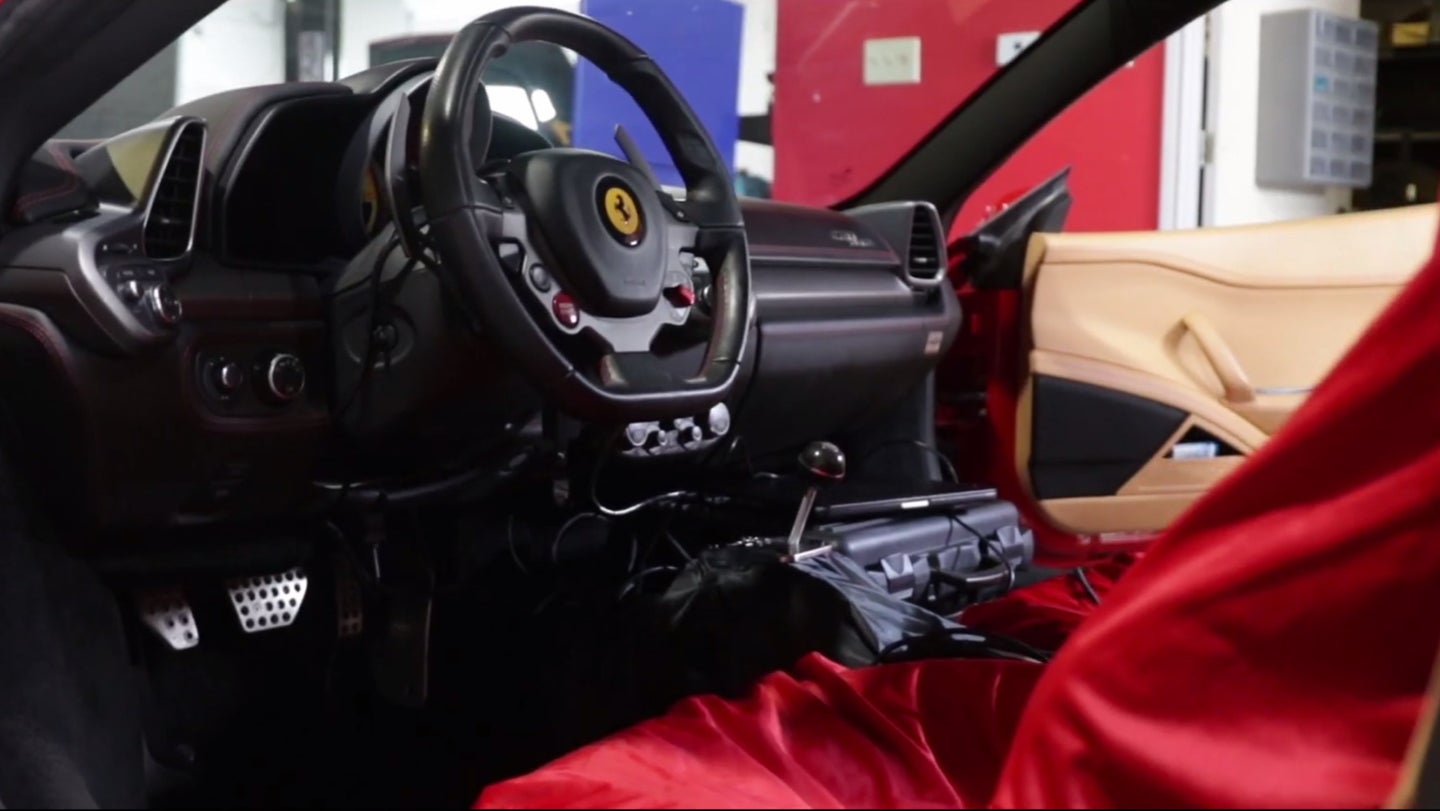 One of my favorite supercars in recent history is the Ferrari 458 Italia. It has a righteously angry-sounding 4.5-liter V8 and a curvaceous body. Yet there's always been one flaw with it: Because Ferrari was so big on touting its Formula One connections in this car, the only gearbox offered was a seven-speed dual-clutch transmission. It shifts fast, but for some, this was no replacement for the gated, six-speed manual transmissions of yore.

The video shows delightful shots of this work in progress, but shows a perfect old-school-style gated shifter sticking up through some interior fabric.

"People are screaming for a manual 458 and 488," European Auto Group owner Art Bartosik told CarBuzz. "If the demand wasn’t there we wouldn’t do it."

If this shop sounds familiar, it's because another recent project of theirs—a manual-swapped Ferrari 430 Scuderia—got a lot of attention for similar reasons. This, too, was a car that was never offered with a manual. We love seeing manual transmissions get added into cars that always deserved to have them.

The 458 is perhaps a more interesting project, as there was never a manual option for the 458. The shop was able to convert the 430 Scuderia's hydraulically shifted gearbox to a stick-shift as the two transmission options shared so many parts, but that's precisely what every trim of the 458 has lacked.

The 458 will require a transmission swap to something else which Bartosik did not specify to CarBuzz. However, he did note that the limited availability of this new transmission will limit the run of manual 458 conversions to only 10 or 11 customer cars. One eagle-eyed poster on FerrariChat says that it appears to use an F430 shifter and gate, although Bartosik explained to The Drive that he didn't want to release details as to which transmission they're using until they know it all works. The goal is to have the 458 swap package ready for production by January 2020.

The Smoking Tire host Matt Farah was impressed by the smooth operation of the manual conversion of the 430's six-speed gearbox, so I have high hopes for what this 458 will be like.

This is all part of the shop's "Gated Six" project, whose website claims that it's here to bring three-pedal fun back to the supercar:

Gated Six was founded by a group of supercar enthusiast and professional auto technicians with the belief and vision of bringing mechanical and manual shift transmissions back into modern day sports cars, supercars, and racecars. We are here to save the manual gearbox one car at a time!

It's a project that's been years in the making and grew out of a lack of availability for Bartosik's preferred transmission on the cars he loves.

"[T]he idea came 4 or 5 years back when the F430 Base models were hard to find in a manual," Bartosik wrote to The Drive. "My favorite car of all time is the 430 Scuderia, which was never offered in a manual. So my dream was to build a manual Scuderia."

Bartosik's shop started by doing a manual swap on a base-model F430, then did one on the 430 Scuderia, and is now testing the waters on other cars.

As for what's next, Bartosik told CarBuzz that there's a lot of demand for a six-speed Lamborghini Huracán, which he says should be an easier swap to do than the Ferraris.

"People want to see an all-wheel-drive, six-speed manual Lamborghini," Bartosik told CarBuzz. "If they want it, we’ll give it to them,"