Range, meanwhile, is not a strong suit for the Genesis—especially when compared to Tesla and Mercedes. 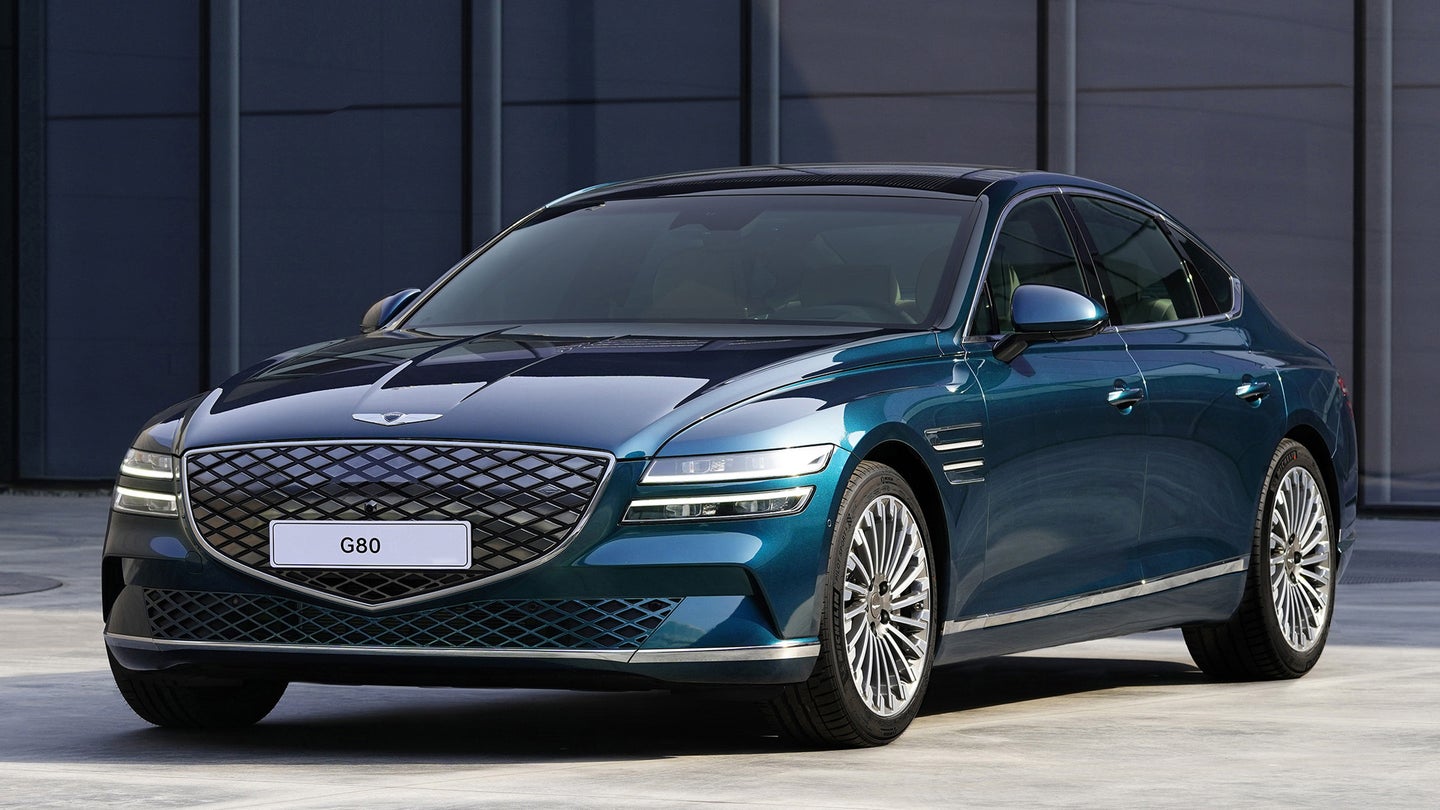 Genesis, Hyundai's luxury sub-brand, has been making the G80 for some time. It's a fun car with some problems, like being expensive for what it is. Now launched in an electric edition, a brand first, those issues haven't fully been addressed; low range (for a luxury car) is a sticking point that won't make anyone move over from a Tesla Model S, although it does have some curiously funky features.

First up, we can't get 'round it: this car has an embarrassingly low range for a new, luxury model. At a manufacturer-quoted 427 kilometers, it's set to go just 265 miles. Compared to the 478 miles being estimated by Mercedes for its EQS, that isn't competing in the same space but both are luxury sedans. Genesis hasn't announced the price of the Electrified G80—neither has Mercedes on the EQS, though it's likely to be significantly higher—but it's reasonable to assume that it'll be up there with the Model S. If that's the case, range alone knocks the Genesis out of competition.

The eG80 is all-wheel drive as default, unlike the EQS or, it seems, most other EVs coming to market at the minute. Aside from the fact that will push the price further up, that does mean despite the relatively limited range it will deliver on the driving experience that's been one of the G80's big plus points. Yes, it's a big sedan, but that's the idea of it compared to the parent brand's Ioniq hatchback.

It has DAS—not the Mercedes F1 funky steering concept to warm tires behind the safety car but a Disconnector Actuator System which aside from sounding like something bad, means it can switch between all- and rear-wheel drive. That will make the driving smoother in some contexts and extend the range somewhat in rear-wheel-only mode.

In charging terms it goes up to 350kW, which is the sort of nice-to-know fact that doesn't relate to any real-world charging network but does definitely mean you'll be able to use any rapid charger you come across. What is genuinely interesting, though, is that it offers Vehicle to Load charging, meaning you can use electricity from the car as a replacement for the grid to plug almost any device in at 3.6kW.

On the interior, the eG80 has "Active Noise Control," which reduces external noise in the cabin by monitoring road noises and making sound waves "of the opposite frequency" to neutralize anything you might hear. The center stack is, mercifully, not too touchscreen heavy and although the seats are still made of leather, other interior fabric comes from recycled PET.

Genesis hasn't announced when the eG80 will be coming to the U.S. but news is set for "later this year," along with pricing details.

Got a story tip? Mail me at hazel@thedrive.com

It’s mainly a design exercise but hopefully, it’s a sign of things to come.

First attempts at anything often lead to subpar results. The Genesis brand’s first SUV isn’t one of them.