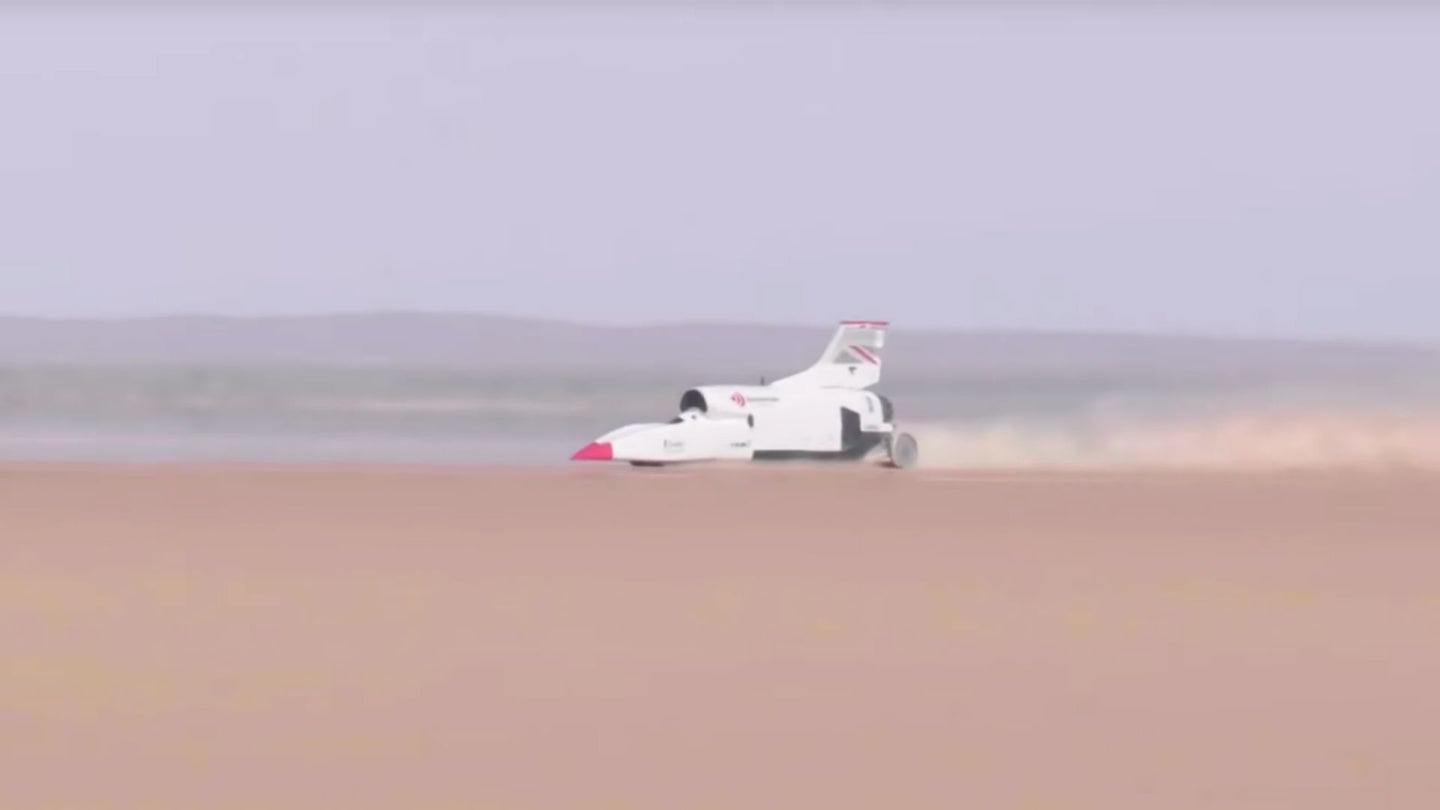 The team behind the potentially world-beating Bloodhound LSR project has reached astronomical heights in its latest trial run. The purpose-built land speed car blasted to 628 miles per hour, breaking the sound barrier before testing concluded this weekend.

The Bloodhound made its run on a dry lake bed in South Africa’s Northern Cape, covering a wide and extremely flat section of the desert. The team timed the run to take place early in the cool temperatures of early morning, which allowed the Bloodhound’s Eurofighter jet engine to build thrust rapidly.

Sensors tracked windspeed traveling underneath the car faster than the speed of sound, and paintwork around the front wheels was stripped away by the violent velocity of the run. To put that in context, 628 mph is faster than a passenger jet travels, but the Bloodhound is hitting those speeds with wheels on the ground. Even a fighter jet doesn’t travel that fast before taking off.

As crazy as 628 mph sounds, the car is meant to go even faster. It's designed to accelerate from 0 to 1,000 mph in 42 seconds and come to a halt using a variety of methods including airbrakes when traveling over 800 mph, parachutes under 600 mph, and disc brakes below 250 mph. The last runs were made using only the thrust from a jet engine, but the car is set up to handle a rocket power unit, too. When the team fits the extra propulsion system next year, the Bloodhound should be poised to challenge the current world speed record of 763 mph.

The race team says the only thing standing between them and the 700mph mark is financing—which has infamously plagued the Bloodhound LSR—as the current capital provider feels that the next phase should be backed by others, like corporate sponsors.

The Bloodhound is one of just six vehicles to have scooted past 600 mph; the appropriately named Sonic 1, Blue Flame, Thrust2, Budweiser Rocket, Sonic Arrow, and Thrust SSC have all been there as well. Two cars, the Budweiser Rocket and the Thrust SSC, have been able to surpass 700 mph.