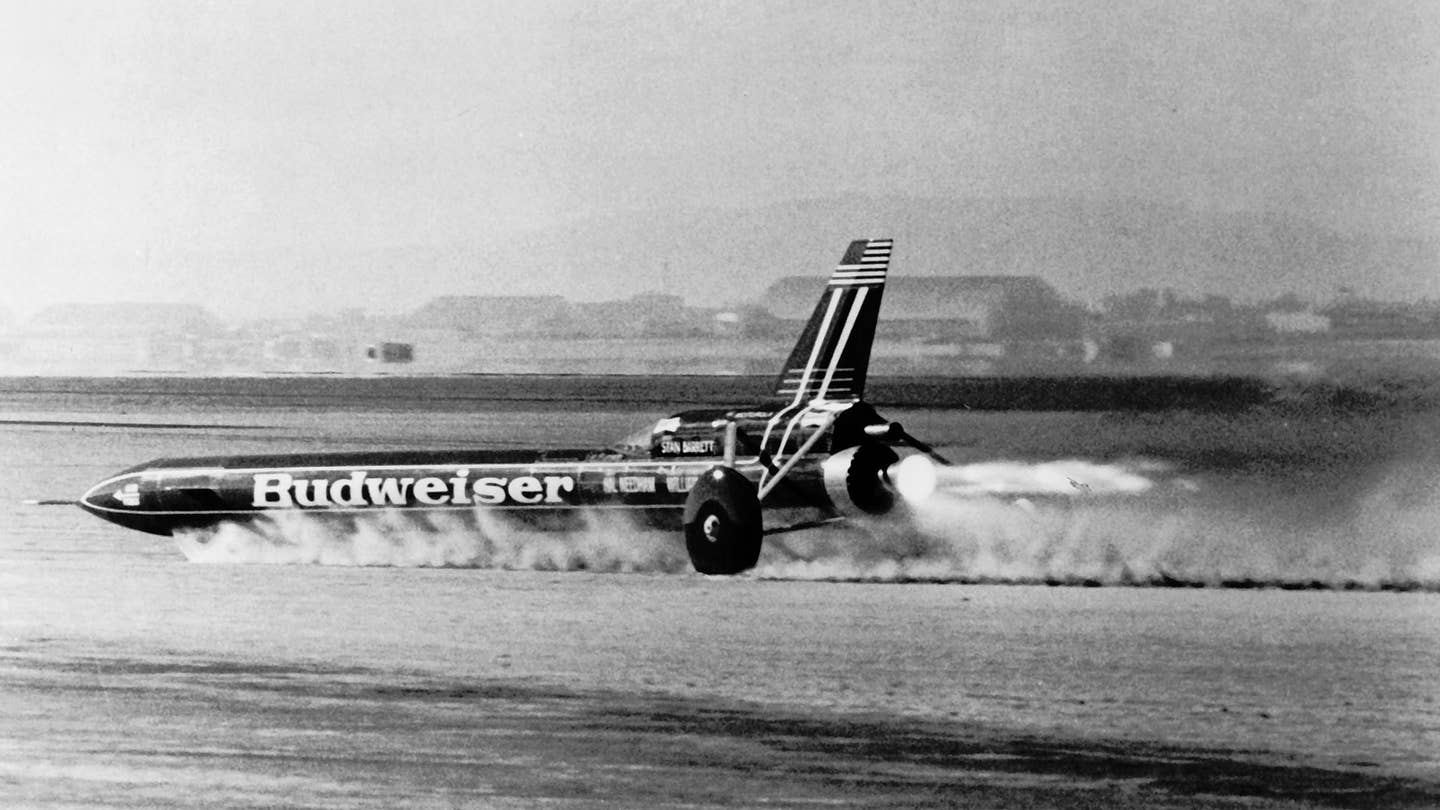 In 1979, Hal Needham, Budweiser and Stan Barrett combined their celebrity, cash and cojones, respectively, to make a supersonic land speed record. The car, the Budweiser Rocket, was no more, or less, than an earthbound missile: three wheels and a stabilizing wing attached a liquid-fuel rocket sporting an additional engine from a Sidewinder. In profile, it looked much like its contemporaries, the Blue Flame and its predecessor, the SMI Motivator.

Importantly, unlike those racers, the Budweiser Rocket was a rocket-powered tricycle; a three-wheeled supercart. It was a very, very serious craft, but the unusual number of wheels meant that neither the Fédération Internationale de Motocylisme nor the Fédération Internationale de l’Automobile, the major international certifying organizations of speed records, recognized it as an eligible vehicle. In addition, when the team brought the Rocket to the Bonneville Salt Flats for its first run, it became clear that the rockets weren’t strong enough to sustain a top speed that would deliver a World Land Speed Record. Abandoning that aim, Needham and Co. decided their new goal would be to exceed the speed of sound on land. No organizing body would recognize the attempt as a record, but glory was enough of a driver that day.

The speed of sound is not absolute, but relies on atmospheric conditions. On Dec. 17, 1979, on the salt, the speed of sound was 731.9 mph. At that velocity, a highly audible “boom” and a white ring of compressed air, or shockwave, would have surrounded the Budweiser Rocket. US Air Force radar data from the attempt was used to estimate a speed of Mach 1.01, or 739.666 mph. The driver, Barrett, as well as Needham both claim to have verified the speed and heard a sonic boom, but not a single bystander interviewed in the intervening years has corroborated the account. In addition, the absence of a sanctioning organization and the fact that the Budweiser Rocket did not duplicate the run meant that today, almost no one believes that the car broke the sound barrier. That record is held by the U.K.’s Thrust SSC car, with a timed, sanctioned and officially calculated speed of 763.035 mph. The record was logged in 1997, a full 18 years after Needham’s attempt.

Related story: The Stuntman Who Set Hollywood on Fire

Now, 18 after that, it’s still hard to believe so much controversy could surround an event which, if truly achieved, would create a sonic and visual spectacle noticeable tens of miles away. Somehow, the passion surrounding speed records, plus Needham’s own, relentless conviction, overcame what should have been simple verdict. We’re not convinced, but Needham vowed that his team outran those sound waves until the day he died. Still, respect for the gumption, if not the results.