The most ticketed car show in America claims another one. 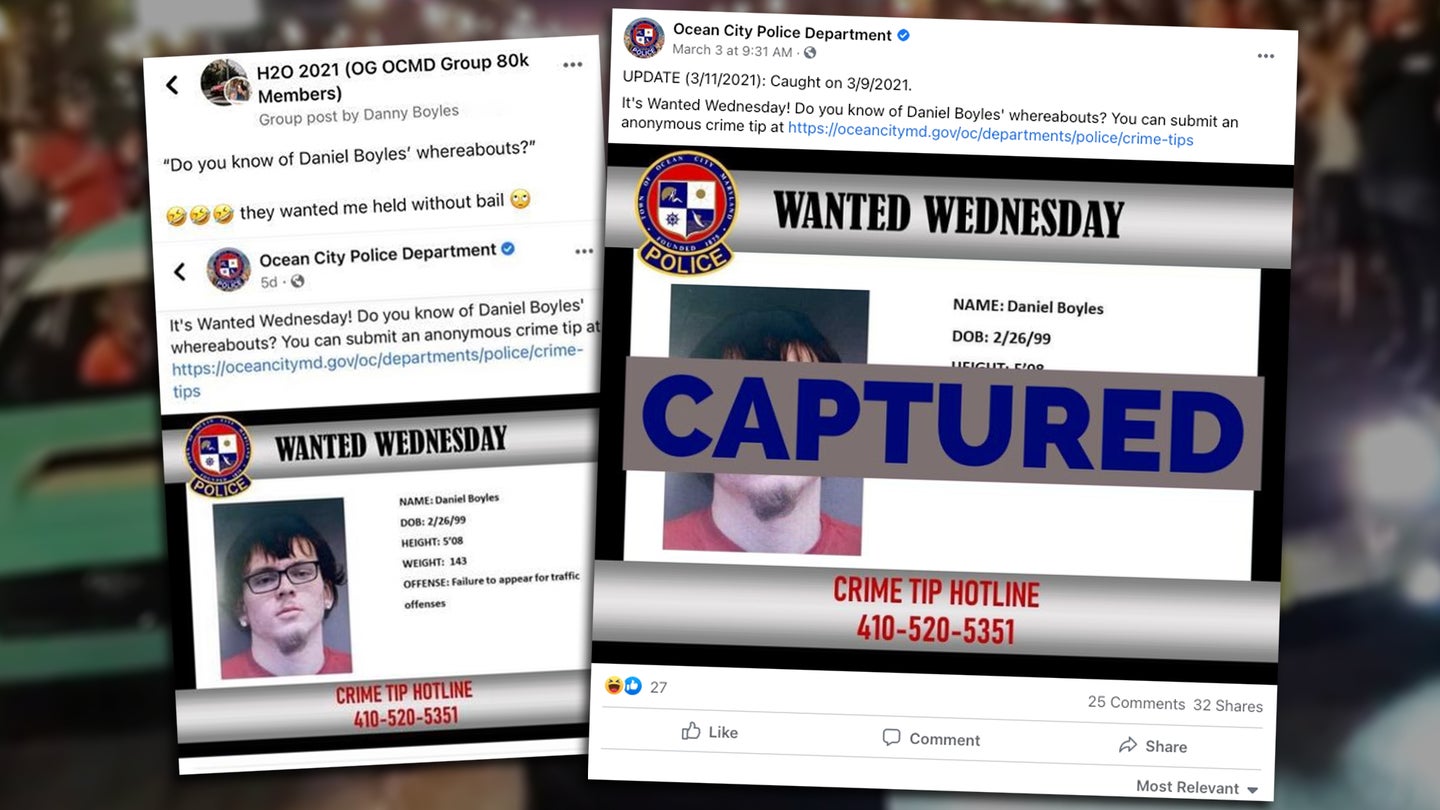 H2Oi is a VW-turned-modified car show near and dear to my stance kid heart but universally reviled by the good people of Ocean City, Maryland after years of the entirely unsanctioned event taking over its streets every September. We've previously covered the endless battle between city authorities and the thousands of car enthusiasts who refuse to back down in the face of a host that clearly wants nothing to do with the gathering. After each semi-disastrous long weekend, city leaders vow to crack down even more on H2Oi with ticket blitzes and road closures, while its dedicated attendees relish the challenge.

During 2020's installment, Maryland officials say police issued almost 3,500 tickets for everything from excessive noise to spinning your wheels to illegal modifications. It appears a number of them went to a man name Danny Boyles, who popped up on the Ocean City Police Department's weekly "Wanted Wednesday" social media post with a warrant out for skipping his court date. We know this because Boyles jumped into the comments to taunt police for overreacting, then shared his triumph with a large H2Oi Facebook group. You can guess what happened next.

Less than 24 hours after Boyles' bragging post appeared in the H2Oi group, OCPD updated its original call-to-action to indicate that he had been "captured." Two days later, Boyles updated his own post to note that he had turned himself in.

So what exactly did the OCPD want with him, anyway? Nearly a month after the event, Boyles posted in the H2Oi Facebook group asking if anybody else had received a "shit load of tickets" in the mail, as well as a separate post that listed a Nov. 16 court date for the offenses. It's worth noting that this Speedhunters story chronicling the weekend noted police were seen deploying portable surveillance cameras with possible license plate readers.

According to the Maryland Judiciary case search, Danny received citations for seven offenses, all of which were listed as being part of the same incident. The offenses included negligent driving, reckless driving, failure to obey a traffic control device, driving a motor vehicle in a manner intended to cause excessive noise, as well as three offenses related to Worcester County's new "Special Event Zone" legislation, which is specifically aimed at curbing unruly behavior at automotive events.

Officials first used this designation in 2018 when it declared Ocean City a Special Event Zone just before the unsanctioned gathering within city limits. This permitted the installation additional traffic control devices, lowering of speed limits, and sharp raising fines. Depending on the type of violation, a driver could face a fine of up to $1,000 or 60 days in jail.

Public records indicate that Boyles was fined at least $1,870 for the single traffic event and earned a mandatory court appearance. We attempted to reach out to both Boyles and the arresting officer to obtain more details on the alleged offenses, however, we did not receive a response at the time of writing.

Unsurprisingly, it failed to meaningfully decrease the number of attendees at gatherings caused by official events like H2Oi and Cruise Week. The legislation was even expanded in 2020 to expand the definition of "exhibition driving" to include revving an engine to an "unreasonably loud" level, grinding a vehicle's gears, backfiring, or permitting passengers to ride on or in an area of a vehicle not intended for passengers (like a hood or roof). The senate bill that was adopted into law is full of interesting clauses specifically aimed at curbing

Danny's warrant was closed on 3/10 when showing that he was released on a $3,000 bond and a new trial was set in May.

So what lessons have we learned? Well, it's fair to say that Maryland really, really doesn't like the unsanctioned gatherings that occur around events like H2Oi. But if you do happen to attend these types of events, be prepared to pay through the nose if you decide to do something reckless. Oh yeah, and maybe avoid taunting the police with gifs.