Toyota Dealers Get Details on the First New Tundra in 14 Years This Week, and They Sound Pumped

The current-generation Tundra is long in the tooth and Toyota’s full-size pickup sales reflect that. 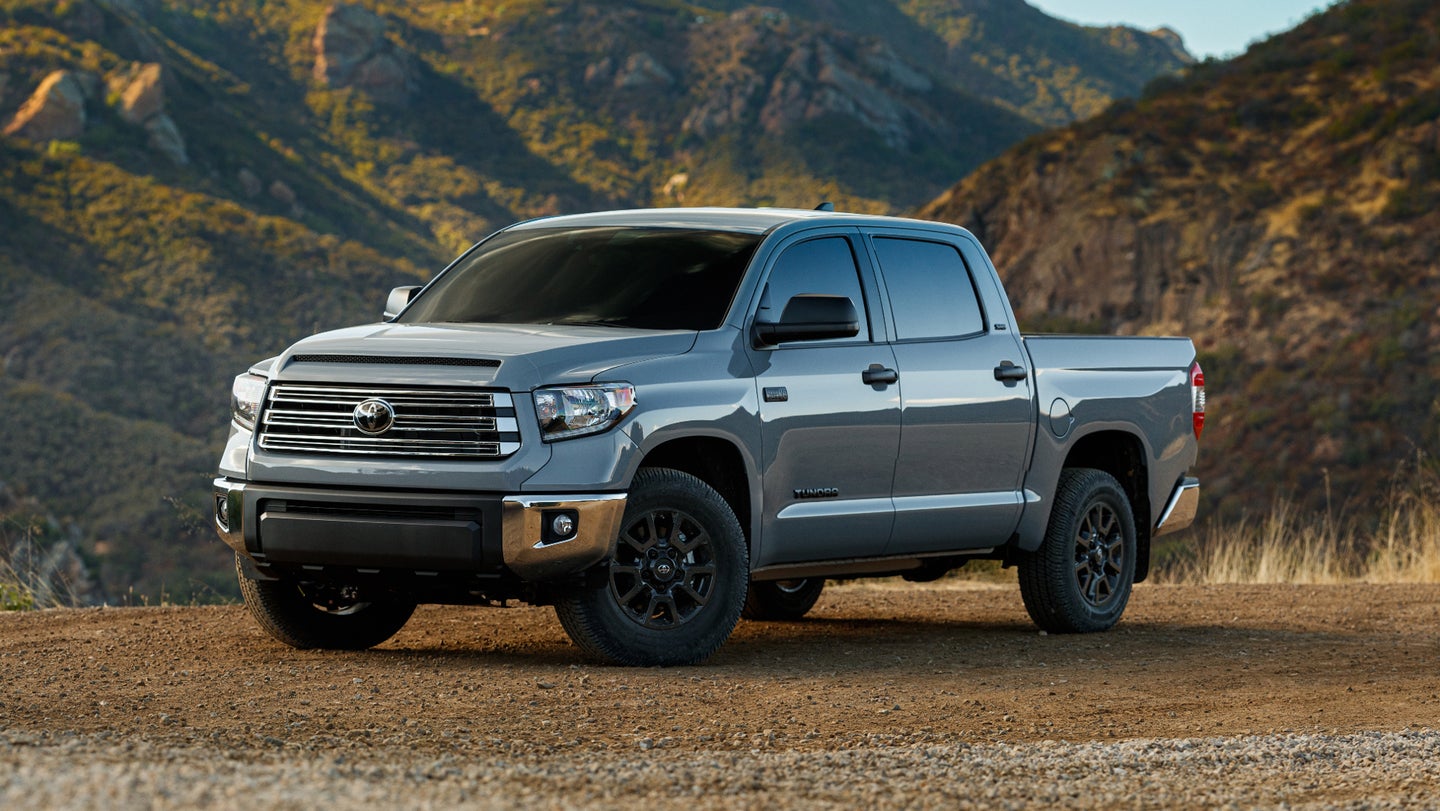 For Toyota dealers, the new 2022 Tundra full-size pickup can't come soon enough. Pickup sales are booming, but the fact that the current Tundra generation was introduced in 2007 has largely left Toyota's full-sizer out of the conversation. That's about to change, as dealerships expect to get their first look at the finally-new 2022 Tundra this week, Automotive News reports. Toyota dealers are absolutely stoked about this.

So far, the only thing that's really been shown to dealerships about the 2022 Tundra has been a teaser video in November that showed off the truck's LED lighting, according to Automotive News. Toyota has been very quiet so far about the new truck, and there hasn't been the flood of spy shots that we've gotten used to from other marques' trucks, either. (Here's lookin' at you, Ford.)

"The new Tundra is the most exciting thing we've had in the last five-plus years. I mean, we've been waiting so long for a new Tundra; we know the potential of that full-size-truck market. And from everything that they're telling us, we're going to have best in class. I mean, we're going to have a world beater, and it's going to be fun to really go toe-to-toe with the domestic trucks."

Given that pickups are some of the highest-profit vehicles that dealerships sell today, it's not hard to see why Toyota dealerships would be this excited about a new truck coming through. This is the first time in years that Toyota dealerships feel as if they'll have a competitive enough full-size truck to take some market share away from Detroit's Big Three.

Building one generation of a vehicle for 14 years isn't unheard of—the outgoing Nissan Frontier gen is old enough to drive, for example. It's just not good, especially when your main competitors are rolling out new generations of their trucks while you're still letting your existing truck stagnate.

There's a lot of things we've learned about safety since 2007, for one, and that alone is enough to drive many customers to a different truck. People also just tend to forget about a truck when it's not making any headlines. The last time this Tundra generation was refreshed was in 2014, and even that refresh is getting up in years. Customers want new bells and whistles, and Toyota is about to give it to them.

The numbers back up the feeling that the Tundra has been relegated to also-ran status in the pickup market. The Tundra placed fifth out of six full-size pickups in its class in U.S. sales last year, beating only the often-overlooked Nissan Titan, Automotive News reports. Since hitting the U.S. market in 1999, the Tundra has never outsold any of the pickups from the Big Three, and frankly, that's a shame.

The current Tundra is a great truck, and one of the vehicles that owners tend to hold onto the longest accordingly. To wit, I have not had any other test vehicle where as many current owners come over to look at the shiny new version and talk at length at how much they like their older one. The Tundra has a following, and thus, expectations for a new one are high. A whopping 14.2% of Tundra owners hold on to their trucks for 15 years or longer, per Business Insider, making it just about time for a lot of owners to look for a replacement.

In addition to those teased LED lights, the new Tundra is expected to ditch its 5.7-liter V8 for a turbocharged V6 paired to an automatic transmission with at least eight speeds, reports Automotive News. A hybrid power pack that would boost fuel economy, torque and power is expected to be an option as well. Fuel economy is one of the current pain points when it comes to selling a new Tundra over any of its competitors, as its 13 mpg city/17 mpg highway figures are worse that any of the full-size trucks it competes with.

Based on the six-lug wheels spotted on test mules, Automotive News also expects it to have a sizable increase in stuff-haulin' capacity from the Tundra's current 10,200-pound tow rating and 1,730-pound maximum payload. Two other things they spotted on tow mules were an oversized sunroof and retractable side steps, both of which I would expect to see on the options list.

Brand executives have already confirmed that the new Tundra will have the most current Toyota Safety Sense suite of safety features, per Automotive News. This package includes adaptive cruise control, lane-keep assist, blind spot monitoring, and other like features.

The lone downside is that the cost of the Tundra is expected to go up to be more in line with other full-size trucks, as Findlay tells Automotive News:

"I don't think we realize that with all the new bells and whistles and powertrain, we're going to be in a different payment range, and so we may lose some of those loyal Tundra customers. But I'm still excited at what Toyota is going to offer out there. It's going to be unbelievable."

Again, this dude is ready to get pumped, friends. Beyond stoked. Pontiac doesn't build excitement anymore, so this guy clearly took up that mission and is running with it as far as he can, friends.

Expect 2022 Tundra production to begin in late fall 2021 at Toyota's San Antonio pickup assembly plant, per Automotive News. The Tundra will be the first new vehicle to use Toyota's new TNGA-F global body-on-frame platform that will eventually be used across the brand's U.S. lineup. The Sequoia is expected to move to this platform in 2022, and the Tacoma and 4Runner will follow suit in 2023.

If you get any information from next week's 2022 Tundra dealership presentation that you'd love to share, don't hesitate to reach out: tips@thedrive.com