You do what you've gotta do.

Off-road testing for some vehicles can be a bit silly—unless they're wheeling on a trail that actually requires real skill and capability, then what's the point? The 2021 Ford Bronco knows this. Luckily, it doesn't cost six figures like some 4x4s we'd rather leave unnamed, which means you won't be afraid to give the truck a beating like Ford engineers were seen doing earlier this week on the Rubicon Trail. There was plenty of dirt and, yes, even dents, and the Bronco seemed to prove its off-road merit where you'd usually its competition tearing up the terra.

Of course, I'm talking about the Wrangler Rubicon. The Rubicon Trail is the origination of the "Trail Rated" badges you see on many Jeep's vehicles. The new Bronco (did you know there was a new Bronco?) may not have one of those badges, but it seems to hold its own here.

The Broncos running on the trail may be pre-production models, as one of them still has some camouflage on it. The Bronco Sport is also missing from the mix here; however, both the two- and four-door Broncos are seen being tested pretty hard. It's unknown which specific packages these particular Broncos are equipped with due to their pre-production status, but we can tell by the grille and a few of the options on the trucks that they're likely Badlands models with the Sasquatch package. 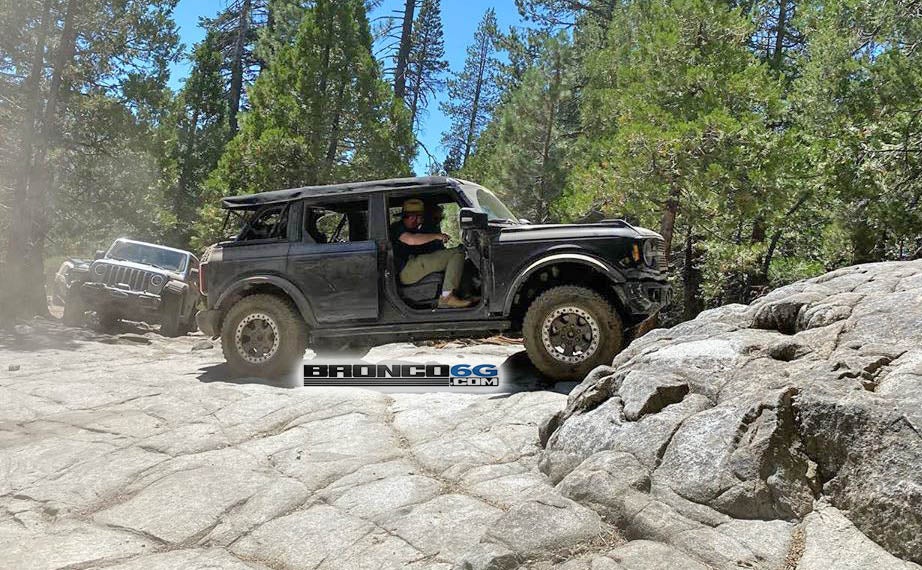 Images taken by a Bronco6G forum admin also show the light damage some of the vehicles sustained after their day out on the town trail. It looks like the skid plates did some...uhh...skidding, the bumpers did some bumping and there were a few scratches on the body. The trucks were also completely filthy, of course.

So if you're curious about the Bronco's off-roading capability, this is a little taste of it. It looks like all of the trucks completed the trail, so I suppose if you're ordering a new Bronco you'll have some ammo for the next time you get in a debate with your Jeep friends. And maybe Chevy can bring a Blazer to the Rubicon Trail to try and get in on that conversation too.