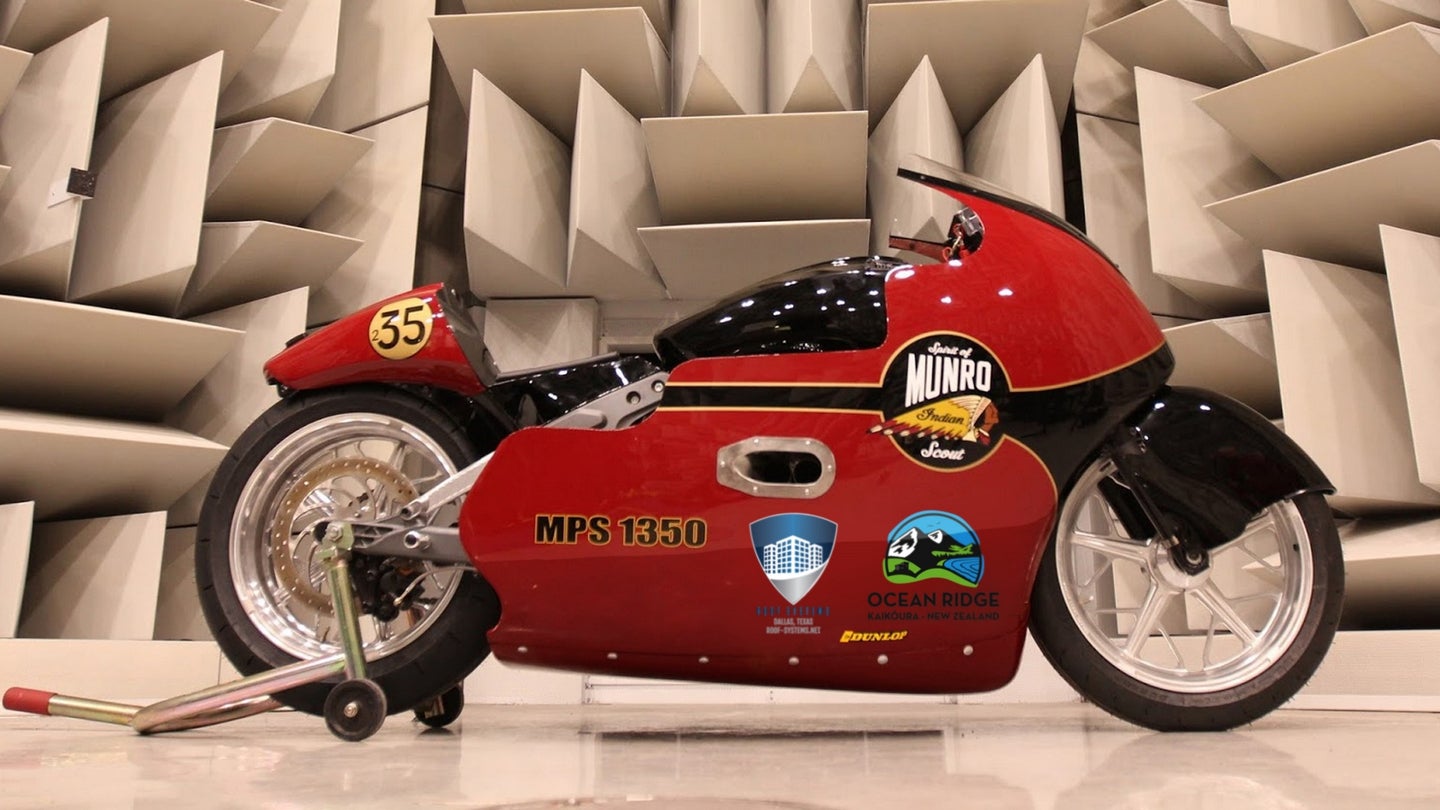 Lee Munro, the great nephew of Burt Munro who was famously portrayed by Sir Anthony Hopkins in "The World’s Fastest Indian,” will attempt to hit 200 miles per hour on the “Spirit of Munro.” The motorcycle is a heavily modified Indian Scout Streamliner which is running at Bonneville Speed Week in the MPS-G (Modified Partial Streamliner) 1,350cc class.

The fastest that Lee Munro has ever gone on the Spirit of Munro is 191.286 mph at last year’s Bonneville Speed Week event. The Indian Motorcycle engineering team has made some further mods to the bike for the 200 mph attempt which include minor body adjustments and an intake modification. Aerodynamics is extremely important when reaching these speeds on a motorcycle and every precise tweak counts.

“Indian Motorcycle was honored to partner with the Munro family last year and pay tribute to Burt’s incredible accomplishments and land-speed record set in 1967. We’re eager to be back on the salt flats with Lee and the ‘Spirit of Munro’,” said Gary Gray, vice president of racing, technology, and service for Indian Motorcycle in a press release. “Our engineering team led by Wayne Kolden and Dan Gervais have put long hours into developing a bike capable of hitting the 200-mph mark and we’re excited to watch Lee pursue this goal.  I would also like to thank our sponsors Cargill Station Ltd, Garry Robertson of Ocean Ridge Kaikoura New Zealand and Jerry Stinchfield of Roof Systems of Dallas, TX for helping us get to the salt.”

To recap, Burt Munro’s legendary speed record still stands today. In 1967 when Munro was 68 years old, he rode his 1920 Indian Scout that he modified himself 183.95 mph at Bonneville, breaking the land speed record for an under-1,000cc motorcycle. Munro once qualified at over 200 mph on his Scout, but it was an unofficial run and didn’t count towards a record. His great nephew Lee celebrated the 50th anniversary of the record in partnership with Indian Motorcycle by doing a commemorative run of the Spirit of Munro at Bonneville last year.

“My great uncle Burt is a significant inspiration for my own motorcycle racing career, and his appetite for speed is clearly a part of my DNA,” said Lee Munro. “Partnered with the exceptional team at Indian Motorcycle, I know we can make our dreams of hitting 200 mph a reality.”

Speed Week runs from August 11-17 in Bonneville, Utah. Check this space for more updates as Munro and countless others hit the salt at Bonneville next week.

Who doesn’t like traveling 600 mph over our nation’s flattest surface?