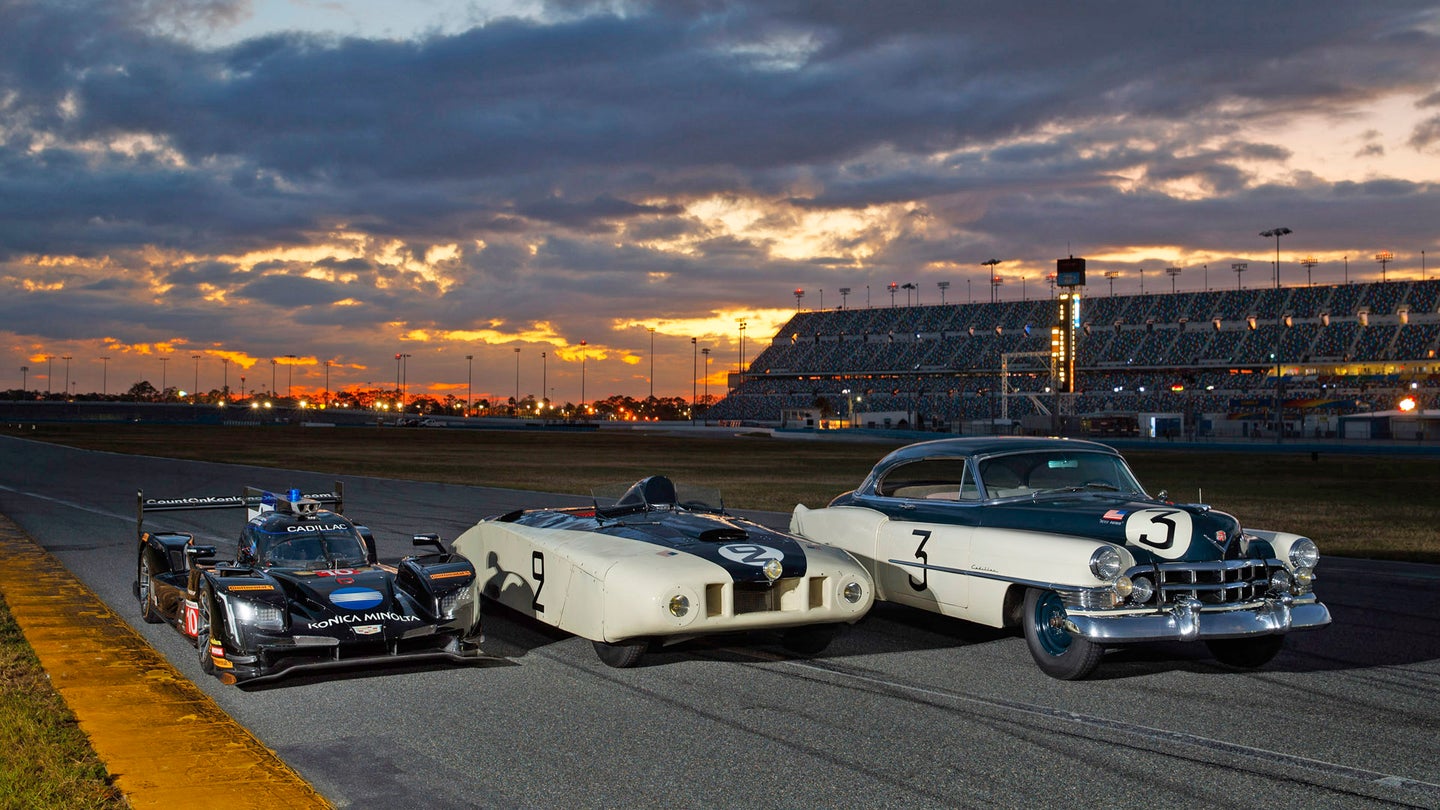 When I hear the word Cadillac, my brain thinks of ash from a cigar falling on a gold pinky ring, Elvis Presley, chrome teeth, and enough trunk space to hold several loaded-sleeping-bags. Do you know what doesn’t come to mind? The 24 Hours of Le Mans. Now, many of us know the Northstar LMP program from the early 2000s. But unless you’re a massive fan of GM’s blue blood brand, you probably don’t know that Cadillac raced two mostly-stock 1950 Series 61 coupes at Le Mans in 1950.

Cadillac owes this moment in its motorsport pedigree to Briggs Cunningham, who wanted to test Cadillac’s new 160 horsepower OHV 331ci V8. The original plan was to enter two customs cars built by Frick-Tappett Motors in Long Island. These cars featured the 331ci V8 in a Ford chassis, and were dubbed the Fordillac.

Le Mans officials deemed the Fordaillac illegal to race because the rules state that engine swaps are not allowed. Briggs didn’t let that stop him and simply got a hold of two showroom 1950 Cadillac Series 61 coupes for the race.

According to Revs Institute, Le Mans 1950 was a trial run for Cadillac to see if it could hang with real sports cars, which weren't so much a thing in American cars at the time. Le Mans rules state that while engine swaps are not allowed, race teams can modify the body on the stock chassis, so Briggs decided to tweak the body lines on one of the Series 61 coupes to improve the odds.

The goal was to design a streamlined low-profile body to improve the Cadillac’s top-end speed down the Mulsanne straight. The task was given to Grumman Aircraft, who built an aluminum body to sit over the stock Cadillac chassis. Aerodynamics was developed in a wind tunnel used to test low-speed aircraft. The result ended up looking like a Series 61 Cadillac pancaked by a Sherman tank, but it could hit 130 mph down a straightaway.

Both Cadillacs were prepped for the race by Frick-Tappett Motors. The stock Series 61 coupe was given an extra gas tank, twin-carburetor manifold designed by Frank Burrell, and air scoops for the brake drums. The car was stock everywhere else. The modified Series 61 was mechanically stock except for a five carburetor induction system. Even with a new all-aluminum body, the car was still a 3,700 pound V8 Caddy with a column-mounted shifter. French fans nicknamed the car Le Monstre when it debuted at Le Mans.

The two cars were split among the team drivers with Miles and Sam Collier driving the stock Cadillac, dubbed Petit Pataud, and Phil Walter and Briggs Cunningham in Le Monstre. Of the entire team, the only driver with any experience racing at Le Mans was Miles Collier, who raced an MG in 1939. It’s impressive to think of the brass it must have taken to wrestle these Cadillacs around a track for 24 hours.

So how did these post-war era American sedans do? Surprisingly well, actually. The stock Cadillac driven by the Collier brothers finished 10th, with Briggs’s Le Monstre Caddy following behind in a respectable 11th place. Even though Le Monstre was 15 mph faster than Petit Pataud, the car lost valuable time when it spun out into a sandbank and had to be dug out by hand. The results of the crash meant Le Monstre was jammed in high-gear for the rest of the race.

The 24 Hours of Le Mans Will Be Postponed Until September

You already know why.