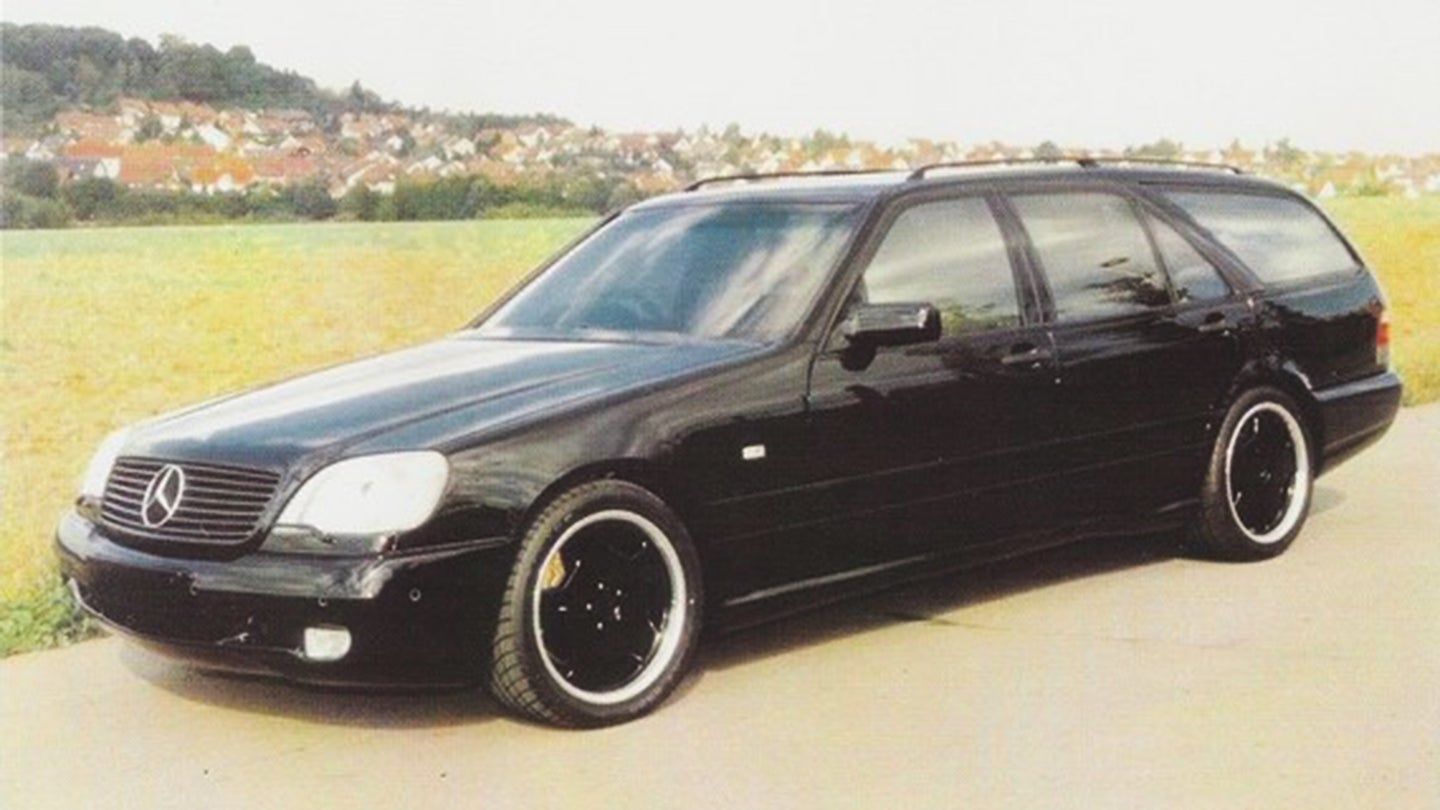 Ever wanted a 565-horsepower, V12 station wagon capable of rocketing to 200 MPH? What am I saying? Of course you have. So you should probably be aware that back in 1996, Mercedes-Benz fulfilled a special order from none other than the Sultan of Brunei to create the S73 T AMG, an S-Class estate with the 7.3-liter V12 heart of a Pagani Zonda. Yeah, being that rich would be fun.

Fitting for such a dreamlike creation, precious little solid info exists on one of the most incredible longroofs ever made. What we do know is that Sultan Hassanal Bolkiah originally ordered fifteen of the eighteen S73 T AMGs built in the mid-1990s, paying the mad scientists in Affalterbach an unknown amount to create the bespoke vehicle out of the W140 S-Class. Mercedes-Benz has never built a station wagon version of the S-Class, so AMG got to work crafting one with the core of the sedan, a streamlined front clip from the 600SEC coupe, and custom wagon bodywork in the rear.

Inside the S73 T's front end was a massive hand-built 48-valve M120 aluminum V12 engine, bored out from the standard 6.0-liter configuration to a whopping 7.3 liters—same as AMG did later that decade when it supplied a 555-hp version of that very engine for the Pagani Zonda S 7.3 (and also the Mercedes-Benz SL 73 AMG convertible, an 85-car run with the largest engine ever put in a production Benz).

Sources indicate the version in the S73 T AMG made 565 horsepower and 546 pound-feet of torque, but the handbuilt nature of AMG's biggest, baddest engines all but guarantees some variation in horsepower. Let's just say it was a staggering amount for any car in 1997, especially flowing entirely to the rear wheels.

While the SL 73 AMG and Zonda are wonderful things to behold, obviously you could carry more people and things in the sultan's mad wagon. Terrify the family dog, if you'd like! Nothing truly beats a good, fast wagon. That seems to be something the royal family of Brunei understood well—in addition to commissioning things like the first pre-Bentayga Bentley SUV, countless coachbuilt Ferraris, and a stretched Range Rover Classic, the sultan's brother Prince Jefri also put up the money for the Ferrari 456GT Venice four-door wagon, a Pininfarina-penned extension of the V12 Ferrari 456.

The S73 T also features AMG sport suspension, a carbon fiber gear selector, 19-inch alloy monoblock wheels, upgraded brakes and a sport exhaust. Those of you wishing for a manual transmission may be disappointed. The big brute has a five-speed automatic. It's also right-hand drive.

Its leather interior is clearly set up for lounging, with the many, many luxuries of the contemporaneous S-Class said to be all ported over, plus a 10-slot CD changer! Sadly, we've come up empty in our search for photos of the back seat or hatch.

This is where things get a little murky. As we said, the story goes that the Sultan of Brunei ordered fifteen cars and later took delivery of only ten. Good luck getting an authoritarian to confirm the contents of his garage. The epic collection is also said to be a shell of its former glory, falling from a reported mid-90s high of over 2,500 cars after a financial crash at the end of the decade left Prince Jefri, who owned or co-owned many of the cars, in legal and political trouble over embezzling billions of dollars in his role as Brunei's Finance Minister.

The collection was surrendered to the government along with most of Prince Jefri's assets, which in a petrostate like Brunei means it was still technically owned by the ruling family. Since the early 2000s, the sultanate has periodically sold off or given away portions of it. Its current size or status is pretty much unknown, but there have been reports that many of the oddball rides acquired in the heady 90s are in sad shape. If there are a few of these custom S73 T AMGs left, they're probably not roadworthy.

"The mechanics had left in 1998, and nothing was in drivable condition," wrote Michael Sheehan, a broker for Ferraris Online who saw the collection in 2002. You can only imagine what's happened in the eighteen years since then.

So that accounts for ten cars, the ultimate fate of which might never be known. And what of the other eight? We reached out to Mercedes-Benz to confirm key details about these ultra-wagons, but AMG's policy is not to comment to third parties on customer cars. They also wouldn't confirm the rumor that AMG still has a few stashed in the basement.

It's not even clear when or where these photos were taken, though there are a couple marked with "2007" posted in the same album on the Brabus 7.3 S Facebook group. It's possible there are two different cars depicted here as well, as the one in the pictures below has a blurred-out white license plate that the one above lacks. Of course, it's equally possible that they're one and the same.

Given all this chicanery, and the amazing dearth of photographic evidence, we're left with a sad fact—the Mercedes-Benz S73 T AMG has probably never been driven in anger, at least not since AMG engineers completed whatever brief developmental testing they did when building. Its V12 has never screamed its way to 6,000 RPM, its long roof has never gone sideways 'round a corner, and smoke has never poured forth from those rear tires.

I can only hope that changes before long. Hey Mercedes, you want to win Radwood? Stop bringing Jerry Seinfeld's Mercedes-Benz E60 Renntech RS, and show up with one of these. You can rebuild it; you have the technology.

Then again, we'll likely see the S73 name come back soon, albeit down four cylinders. Mercedes' parent company Daimler AG finally trademarked the S73 name in 2018, and the new powertrain is rumored to be a plug-in hybrid making over 800 hp and 738 lb-ft of torque, thanks to a 612-hp 4.0-liter twin-turbo V8 and an 204-hp electric motor, reports Automobile. So the upside is that it will be even more powerful than the Sultan's supreme wagon—even if it doesn't sound quite the same.