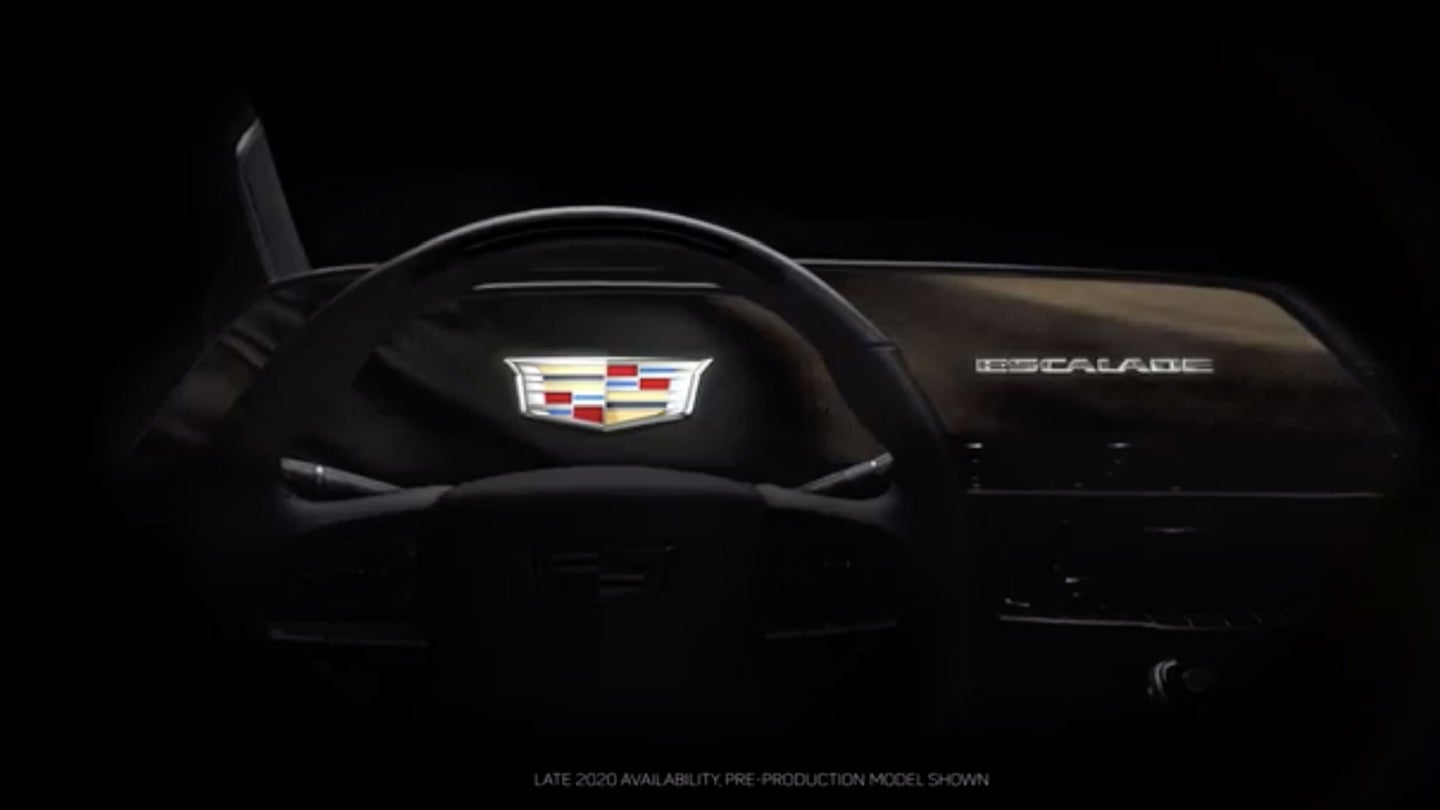 Not to be outdone by its more pedestrian (but still expensive) 2021 Chevrolet Tahoe and Suburban sister models, the next-gen Cadillac Escalade is set to feature tech that's never before been seen in the luxury SUV segment—not even from its German rivals. Forget about the plush materials and enormous cabin for just one second; we're talking about an interior screen to end all screens, measuring 38 inches from one side to the other. Simply put, it'll be the largest of its kind throughout the entire auto industry.

Cadillac posted a teaser of the 2021 Escalade's interior to social media Monday morning, giving a glimpse of exactly how sizable this OLED curved display will be. By the looks of things, it'll serve as the sole instrument cluster, transitioning to an infotainment control center further down with some touchscreen functionality. It seems as if there will also be physical controls for those who prefer the familiar feel of dials and buttons.

For reference, the Escalade's trick display is far larger than the units we see in vehicles such as high-trimmed Ram 1500 pickups (12 inches diagonally) and the Tesla Model 3 (15 inches diagonally). Mercedes-Benz is the only automaker within shouting distance of producing a screen setup as large and even then, that's achieved by two 12.3-inch monitors on the dash.

We're able to scout a few other niceties in Cadillac's 12-second long clip, headlined by a green LED strip atop the Escalade's steering wheel. This hints that the manufacturer's Super Cruise self-steering adaptive cruise control will make an appearance in the 2021 model, as reported. According to MotorTrend, models produced a few months after launch will begin to feature the Advanced Driver Assitance System (ADAS).

One small-but-significant feature that stands out is a traditional column-mounted gear lever, which was replaced in the 2021 Suburban and Tahoe by a push-button arrangement on the center stack.

Luckily, the Escalade will share other bits with its Chevrolet counterparts including an independent rear suspension. This results in more interior space  that’s maximized by the new platform, especially in the third row of seats.

2021 Chevrolet Tahoe, Suburban Finally Ditch Outdated Interiors and Get With the Times