Get a Load of This Eyeball-Popping, Peacocking McLaren 650S Spider

Just remember, the owner of the “PeaClaren” once built a racetrack in his front yard. 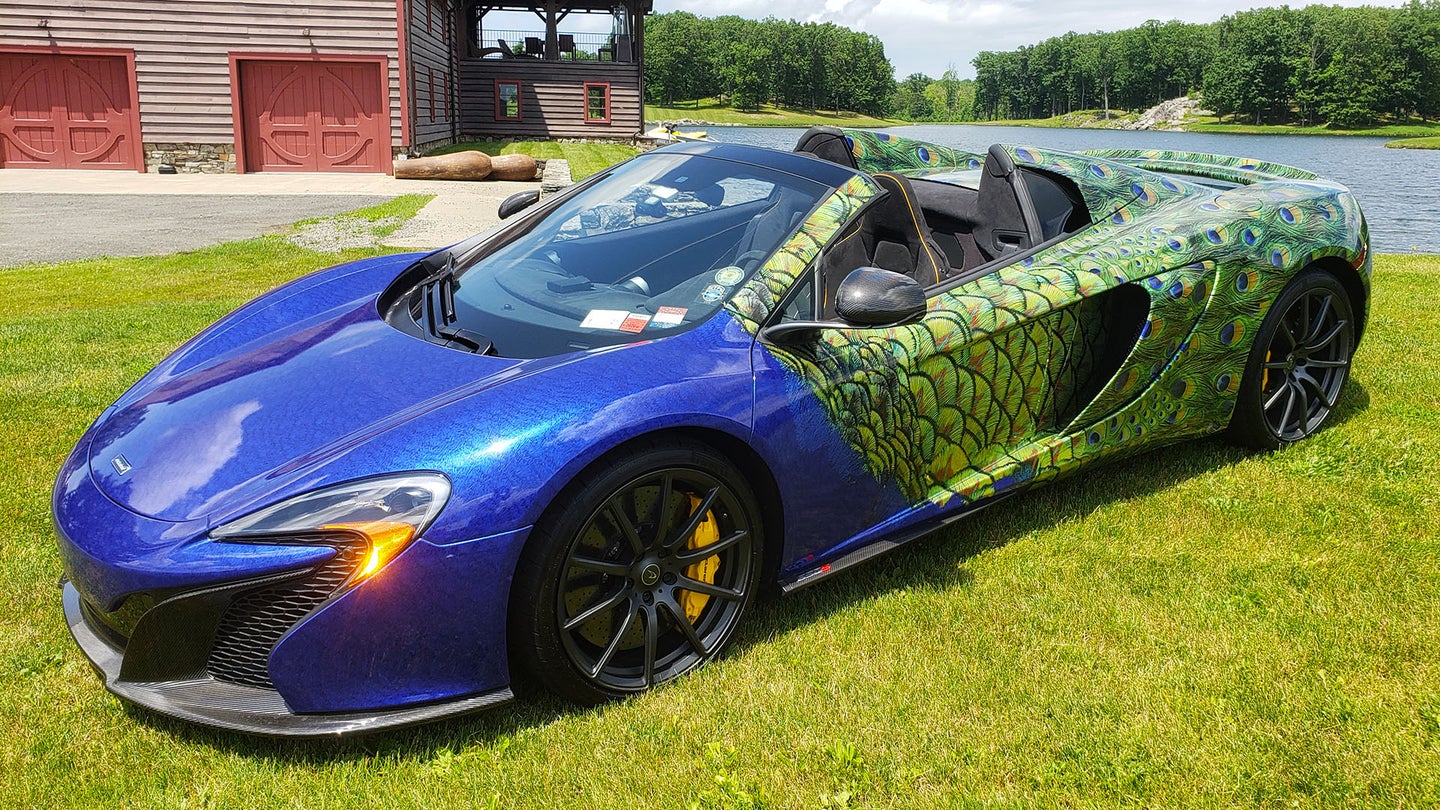 Listen. Before you come down too hard on this hyper-decorative wrap job, understand the car's owner Alan Wilzig is an enormously generous guy who supports causes from hospitals to children's' charities, often by throwing huge fundraisers at the private racetrack he built in the front yard of his property in upstate New York. Wilzig is well aware faux peacock feathers are not the kind of thing you'd normally find plastered on a McLaren, but he has his own vision. He respects your opinion, but he's going to do what he's going to do.

A few years back, the 1.1-mile private racetrack Wilzig built in his front yard was big news. Dubbed Wilzig Racing Manor, the circuit is 40 feet wide, paved using motorsport-quality tarmac, and includes 80 feet of elevation change. It can be run in several configurations, including a 2.75 mile double-back lap for time trials. It's the largest racetrack zoned for private recreational use in the U.S., and sits within eyeshot of Wilzig's own car-and-bike museum, race shop, and clubhouse.

Private racetrack cred, notwithstanding, Wilzig expects the design to provoke, but no matter; it's based on a few personal proclivities. Naturally, the wrap's design is a comment on supercar owners "peacocking" for attention in their flamboyant rides. Wilzig says it also recalls McLaren's avian-themed April-Fool's-Day joke in 2017, in which it announced a 570GT covered in carbon-fiber feathers while introducing the company's bizarre "Biomimicry Specialist," who was supposedly inspired by the aerodynamics of birds circling McLaren's Woking headquarters.

Wilzig, along with his love of cars and motorcycles, is also a longtime collector of vintage glass and Fabergé enamel work. He made the initial sketches of the wrap, incorporating his favorite enameling colors of lime, cobalt, turquoise, aqua, and orange. Wrap artist Scott Skepple used those sketches to create the final design, which was installed by Ryan Oyola of Voodoo Vinyl wraps in Medford, New York.

F1 fans may get to see the "PeaClaren" up close; Wilzig will be roadtripping to the Canadian Grand Prix in Montreal this weekend.