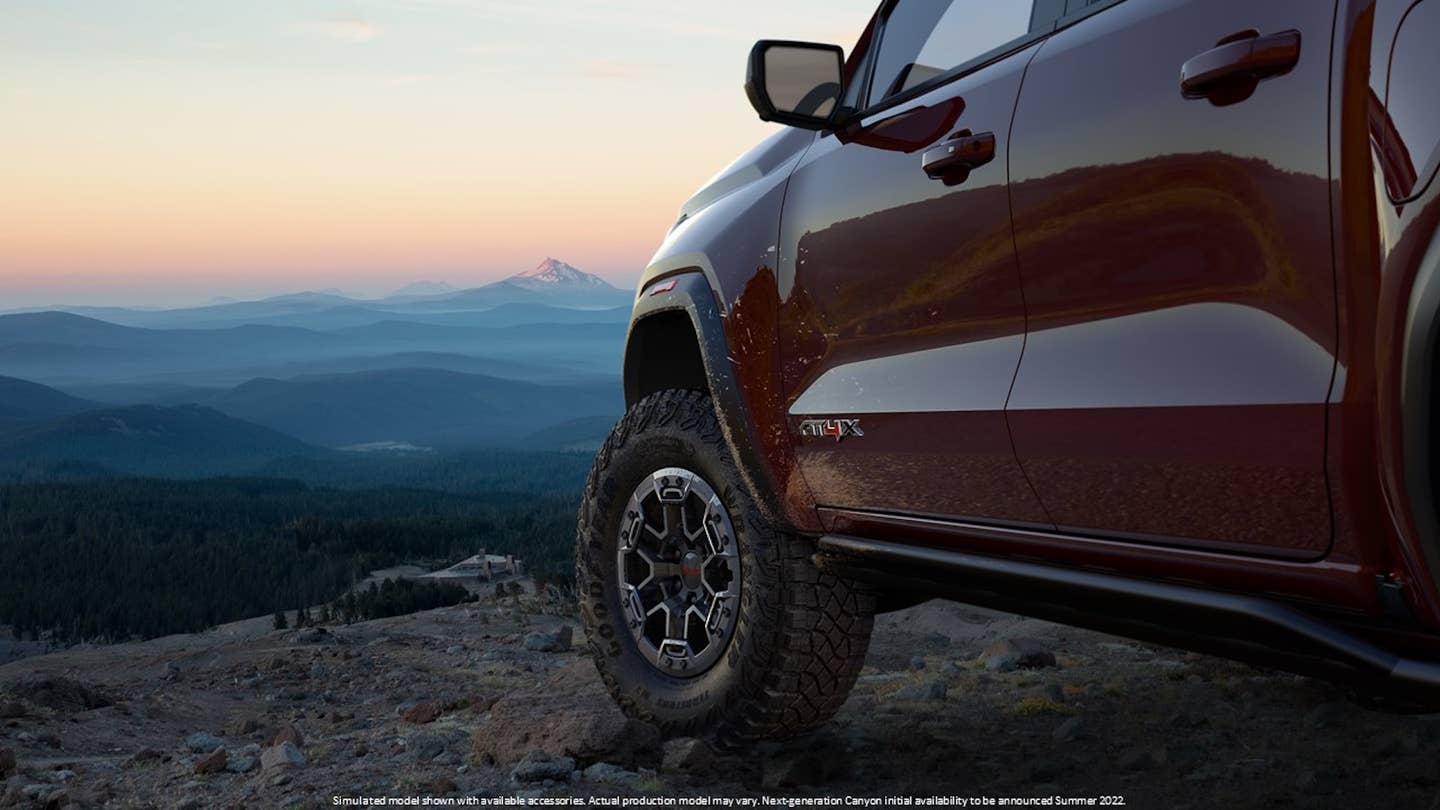 The current GMC Canyon may be the best-towing midsize pickup, along with its Chevy Colorado brethren, but its considerable age makes it a tough sell. It may have only been introduced here in 2014, but abroad, the platform has been around since 2011—it's as old as the Ford Ranger. That's finally about to change, though, as General Motors has confirmed and teased the next-generation 2023 GMC Canyon in its ultimate off-road guise: AT4X.

GMC confirmed the new Canyon in a brief teaser published Thursday, depicting the truck's driver-side doors, front fender, rocker panel protectors, and six-spoke wheels. Said wheels are confirmed to be 17-inch, beadlock-compatible units, while lettering on the tires reveals them to be Goodyear Wrangler Territory mud tires. (That'd seem to hint at the Canyon AT4X's intent and capabilities.) Rumors have suggested these tires could measure as much as 33 inches, making them two inches bigger than the outgoing Canyon AT4's 31-inchers, and contributing to more ground clearance.

GMC won't reveal the new Canyon AT4X until this summer, but we can still form expectations of it by looking at the current Canyon AT4 as well as the pioneer of the AT4X trim, the 2022 Sierra. Party pieces for today's Canyon AT4 consist of off-road suspension, a one-inch leveling kit, and skid plates, while the Sierra AT4X is an altogether more serious off-roader, comparable to the Silverado ZR2. Its combination of Multimatic DSSV shocks, electronic locking differentials front and rear, and one-pedal crawl mode would seem to set the tone for the Canyon AT4X, not to mention the next-gen Chevy Colorado ZR2. It's pretty much a shoo-in if the Canyon is getting renewed, and it won't arrive a moment too soon, not with Ford already parading around its new generation of Ranger Raptor. And unlike the last one, this Ranger Raptor's coming to America—get ready for the comparisons, because they're inevitable.