What Aston’s managed to achieve with the DBX707 is a near-perfect balance of brute performance and British luxury. 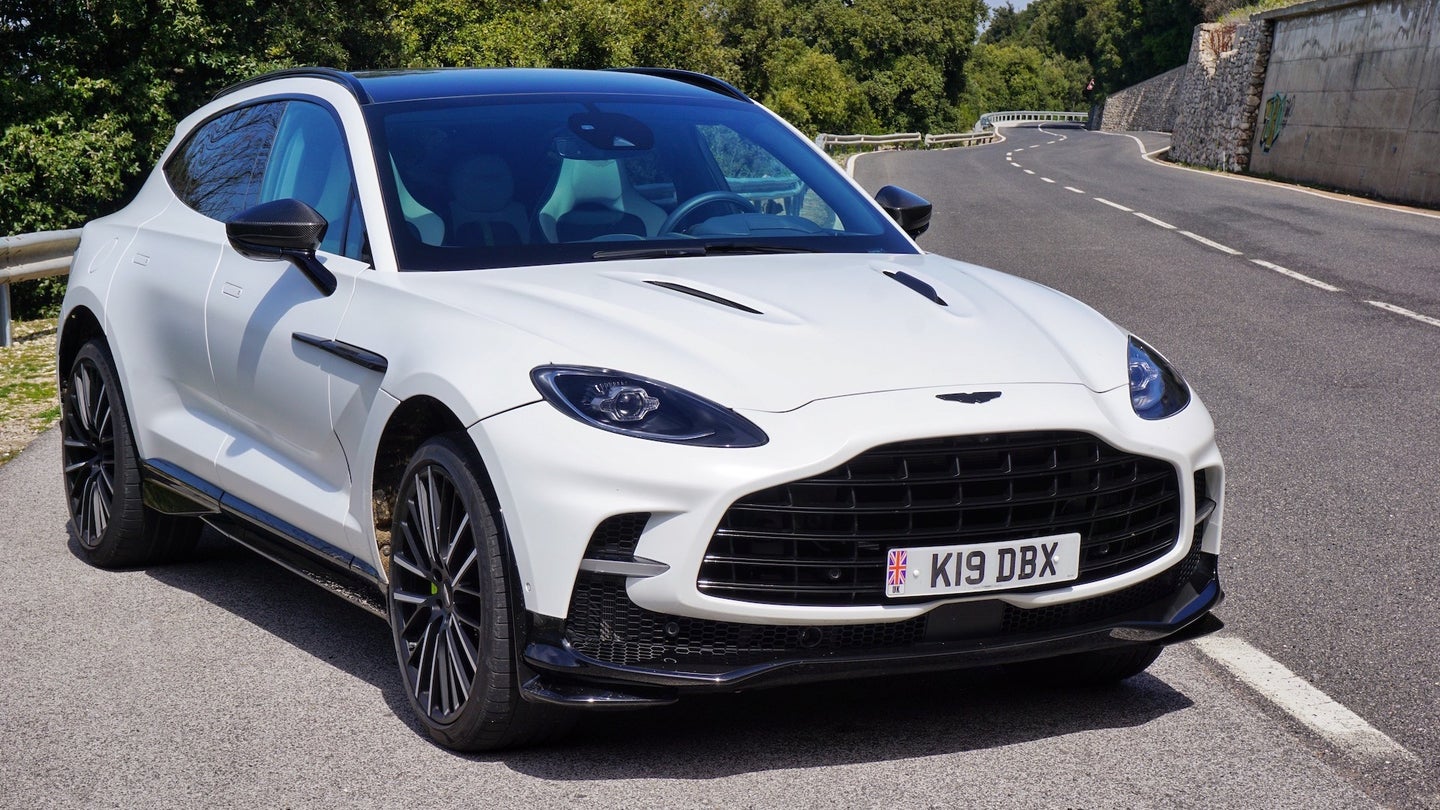 More powerful, more exclusive, more of everything. That's what the world's rich want from their SUVs nowadays. Once flaunted via long-wheelbase, chauffeur-driven sedans, wealth is now paraded to the masses in the shape of aggro and über-capable family haulers with eye-watering price tags. And while the Germans have been at it for decades with their AMGs, Ms, and Turbos, Aston Martin is just now joining the club—and doing so in a mighty way. Say hello to the 2023 Aston Martin DBX707, a—takes deep breath—more powerful, more exclusive, more sinister, more capable, and yes, more expensive version of the DBX SUV.

Following a late arrival to the game with its first-ever sport utility vehicle, Aston's probably now aware of just how profitable this sector of the industry is. But, you'd be mistaken to think that this is all 'bout a quick cash grab. No, there's a real sense of pride behind the brand's only SUV, which as The Drive's Editor-in-Chief Kyle Cheromcha put it after driving one through the deserts of Arabia, "It's every bit an Aston Martin."

Now, it's the DBX707's job to build upon that and make the DBX brand an even bigger success for the up-until-recently cash-strapped automaker. And if the amount of horsepower is any indication of how badly it wants to play in the game of high-dollar, ultra-posh SUVs, then it's safe to say that Aston hasn't just rolled up its sleeves—it's ripped the whole damn shirt off.

The Aston Martin DBX707 serves as the high-performance and range-topping version of the DBX SUV that launched back in Nov. 2019. It still fits five passengers and has a fairly large trunk, it's got all-wheel drive, and offers its lucky owners the best of both worlds: a practical SUV to drive around town, and a savage backroad bruiser that's worthy of the British Empire's favorite secret agent. And, as an added bonus, once it goes through a rigorous (safety-related) vetting process, it'll replace the current DBX as Formula 1's medical car.

It is powered by the same AMG-derived, 4.0-liter twin-turbo V8 engine that's found in the normal DBX and other models across the Aston lineup. It produces a thunderous 697 horsepower, towering over the lesser model by 155 ponies—though there's more to the new SUV than just additional power. The DBX707 is the result of what's called a "transformative tech agreement" with Mercedes-Benz, in which the Germans bring in the hardware and some of the know-how, but the Brits at Gaydon make the drivetrain bespoke by providing their own internal and external components, as well as all calibration ranging from firing order to turbo management and software tuning.

Another big upgrade is a new nine-speed "wet clutch" automatic transmission, which replaces the traditional dry clutch setup in the base car. In short, a wet-clutch is more efficient and considerably stronger than a dry-clutch setup because the plates are constantly covered in oil. (If you want to know more, I encourage you to dig deeper into this exhilarating subject on your own time.) Moving on; the new setup is designed to better handle the higher power and torque output sent from the engine while providing drastically faster gear changes and more linear acceleration. This translates into 3.1 seconds from zero to 60 mph as compared to 4.3 in the regular car, but also for a more engaging driving experience.

If you're wondering why there's a 707 in the name yet it "only" has 697 horsepower, you're not alone. Allow me to explain. In its country of origin, this SUV is rated at 707 PS which stands for pferdestarke (German), the standard European way of rating horsepower. When translated to power output in domestic terms, where one PS is 98.6 percent of one horsepower, the final North American rating is 697.10 horsepower. Of course, DBX697 doesn't sound as cool, so Aston didn't bother renaming the thing.

While it doesn't sport an entirely new design, the DBX707 is a drastic departure from the standard model in terms of styling—though most changes are rather discrete. The grille, for example, had to grow in order to supply the more-powerful engine with more air. Other air inlets around the front fascia were also tweaked to allow more airflow for either aerodynamic purposes or for the sake of cooling down components like the new, standard carbon-ceramic brakes. The front splitter is more pronounced, too, for a wider, more menacing stance. All in all, airflow was increased by a staggering 80 percent.

Now, for the not-so-discrete details. First, the swoopy, gorgeous ducktail decklid remains, but now it is joined by a new lip spoiler on the roof wing. This wing reduces lift and increases stability at high speeds, working in conjunction with the least subtle design element of the SUV: the rear diffuser. This massive unit looks straight out of the Valkyrie hypercar (oh wait, it is!), and it's just a gorgeous piece of body fabrication that gives the DBX707 a very cool, elbows-out kind of look.

On the narrow and curvy roads of Sardinia, Italy, where Aston sought inspiration from various 007 films to launch its newest offering, the glamorous DBX707 paired well with the glamorous vistas of the Mediterranean, while its ruggedness matched the arid landscape. Over the course of a few hours of driving, I experienced most of its driving modes: Terrain for off-tarmac situations, GT for city driving, Sport for... sport, and Sport+ for when you're feeling extra spicy. There's also an individual mode where you can customize driving behaviors individually.

At this time of year, as it turns out, most cars traversing the island's mountainous roads are either farmers carrying goats in Fiat Pandas (a hatchback) or European semi-trucks, neither of which exceed 35 mph. Also, passing is nearly impossible. In this scenario, the DBX707 rode like a plush luxury SUV in GT mode, absorbing road imperfections without the slightest thump from the suspension or creak from interior panels. Given the added performance, engineers actually revised the entire suspension to improve traction and comfort. Dampers were re-tuned for pitch and roll to provide more controlled motions behind the wheel, while the rear suspension was softened to make sure those occupants don't projectile vomit their meals onto their laps due to motion sickness.

With the Pandas out of the way, Sport+ allowed me to get a better understanding of the DBX707. And, well, it didn't disappoint. Whether 707 or 697, a tidal wave of horsepower is unleashed when you bury the accelerator, and it's the loud bang of the transmission shifting gears that makes you realize you're going very fast. Second and third gear quickly go by and you're already doing triple digits before shifting into fourth. When it's time to slow down, the new carbon-ceramic brakes (16.5 inches front, 15.3 rear) step in and keep the 4,940-pound SUV from flying off into the azure waters below. Like most vehicles with this much power, the DBX707 can be enjoyed for a few seconds at a time, mostly because you either catch up to traffic or run into a cop—or you crash.

It's a good thing, then, that this Aston doesn't demand the driver to do neck-breaking speeds in order to have fun. The steering feel is in a class of its own, providing you with sports car-like feedback. It's an electric power-assisted unit that offers the right amount of resistance depending on the drive mode, and it was put to good use through many hairpins. For better or for worse, it gives the driver plenty of confidence to carry more speed into corners without the front end feeling uncertain. In fact, one of the car's strongest attributes is just how tank-like it feels. It's sure-footed, something that's important when waltzing through esses on the side of a mountain while pretending to be James Bond.

Agility is its other strong suit. While you do feel the Aston's weight, it's got the power and balance to counteract it. The active center differential has been recalibrated for better power distribution, and the DBX707 sports a single-piece, all-carbon driveshaft that aids in weight savings and power efficiency. All of this makes it shine in the corners, where smooth and gentle steering inputs make for an engaging and extremely pleasant drive. This isn't a rowdy Aston you should take to the track, but it's the closest thing you can get to one while being able to carry another four folks, maybe a dog, and for sure some groceries.

The final stage of our drive featured a beachside, two-mile-long trail that consisted of compacted sand with plenty of ruts and large sinkholes caused by flooding. The DBX707 went from speeding through country roads to lifting its wheels off the ground at three mph. Set to Terrain mode and with the suspension fully raised, the SUV crawled through some fairly nasty stuff that I wouldn't put my Honda Civic through, let alone a $300,000 SUV. My biggest fear was popping a tire in the middle of nowhere or ripping off the rear diffuser (at which point I would've asked Aston if I could bring it home with me), but luckily both the car and I made it out unscathed. Can the DBX707 hit the trails? Yes, though you most likely will cringe through the ordeal as you hear stuff dragging and banging at the wheels and undercarriage. Should it? Probably not, unless you like to suffer (or burn through money).

Aston Martin is directly targeting the Lamborghini Urus, Bentley Bentayga Speed, and Porsche Cayenne Turbo GT. Those are some serious competitors—and the kinds that cater to folks who care more about vanity than price tags. While the DBX had a good presence with that crowd, having an amped-up version of it will certainly move the brand up-up-market. Frankly, I think Lambo, Bentley, and Porsche have reason to worry.

In the end, the 2023 Aston Martin DBX707 is an Aston through and through, in that it doesn't forget how to be a posh, comfortable SUV. While I couldn't devote my attention to specific aspects like driving assists, infotainment, and other areas one would experience on a daily basis, what stood out to me is how well-rounded the DBX707 was from a pure driving perspective. It doesn't come across as a restrained sports car that's miserably trying to be an SUV, nor a lousy SUV that's desperately trying to be a sports car. It's a proper thing, and I look forward to a second date with it.

The final iteration of the V12 Vantage goes out on a limited-production high note chock full of superlatives.

2021 Aston Martin DBX Review: Classic Luxury in a Modern SUV, for Better and for Worse

The DBX drives great but is curiously lacking in advanced driver assistance systems that make for true modern luxury.

Over the course of two days, I spent time in five different Aston Martins to get a feel for their strengths and weaknesses.