We drive the AMG-engined, still-beautiful DB11 on Spain's Costa Brava. 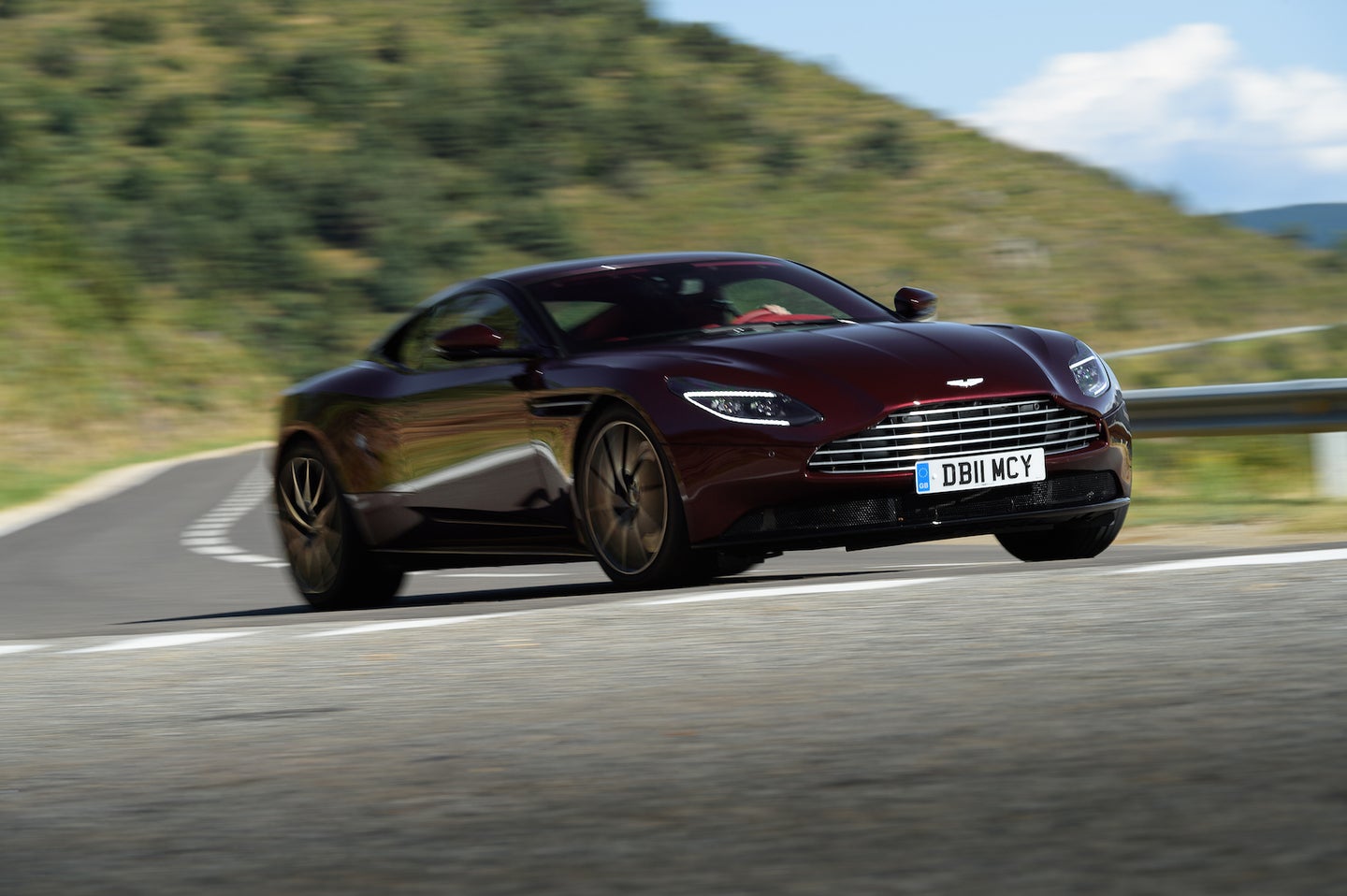 Just days after I drove the Aston Martin DB11 V8 in Spain, I found an odd souvenir in The Drive’s Brooklyn parking lot. The pretty package screams “Germany,” not Spain, or even England.  It’s a Mercedes-AMG GT C Roadster. And the bi-turbo, 4.0-liter V8 beneath its hood that’s disturbing the peace in our courtyard is largely the same hand-built beauty that powers the Aston.

Strange times, mate. But for Aston Martin, whose 104-year history has produced just 80,000 cars—and serial brushes with disaster—“strange” is better than “screwed.”

Mercedes-Benz has secured a 5-percent stake in the company, in return for providing AMG engines, technology and infotainment. With powerful German technology crossing the Channel—in a more-benign form than the V-1 and V-2 rockets that once rained on Britain—Aston is free to focus its oil-backed Middle Eastern funding on what it does best: the cinematic splendor of its designs; its artistry with interior wood, leather and metal; and the distinctively British way its cars go about their business.

So while Aston Martin has extended an international hand, and received handshakes in return, it has managed to avoid a more intimate marriage and consummation. For better or worse—and unlike Ferrari, Bentley, Lamborghini and Porsche—Aston Martin remains an independent company that largely calls its own shots, now guided by steadfast CEO and former Nissan executive Andy Palmer.

As I discovered in Spain’s mountainous Costa Brava region, the latest shot is the DB11 V8. It’s a bargain by Aston gran turismo standards, at $198,995—although that's before a destination charge kicks it to $201,820, another psychological realm altogether.

Still, that’s $17,500 less than the 600-horsepower V12 model. The difference may allow owners to dangle a sharp new Patek Philippe over the DB’s windowsill, while complimenting themselves for sound financial judgment.

Honestly, the DB11 could have a 2-horsepower Vitamix under the hood and people would still fall for the thing. Like its predecessors dating to the David Brown era—the industrialist who bought Aston Martin for a paltry £20,500 in 1947, after spotting a cryptic ad in the London Times—the DB11 really is the consummate car for a British secret agent.  Say, Colin Firth and Taron Egerton in those kickass Kingsman movies. Like those suave killers, the DB11 is ridiculously good-looking, civilized but also a bit louche, and packing more heat beneath those tailored clothes than you’d expect.

The DB11 is also a marked improvement over the DB9, whose 15-year-old design and technology were falling hopelessly behind the competitive curve. The DB11 still uses an extruded aluminum chassis, as demonstrated by a peekaboo, full-size cutaway displayed on our hotel lawn. But the updated platform incorporates “Hot Form Quench” technology (or HFQ), the fruit of Aston-backed research at the University of Birmingham and Imperial College London. Hot Form Quench refers not to a strategic dousing of a Sports Illustrated swimsuit model, but to a method of pressing and quickly cooling heated aluminum in a die. A rigid carbon-fiber driveshaft connects the engine to the eight-speed, rear-mid-mounted ZF automatic transmission.

The new, 503-horsepower V8 model cuts mass even further. Its cooling pack and four AMG-built liters weigh in at 253 fewer pounds than the 5.2-liter, 600-horsepower V12. Compared with the twelve-cylinder, this shorter, lighter loaf can be shoved almost entirely behind the front axle, a boon to handling that puts more mass rearward and within the wheelbase: The V8 shifts the DB11’s front-to-rear weight balance from 51 percent front/49 percent rear to a more idyllic 49/51. EPA economy numbers aren’t official, but the DB11 V8 should enjoy a 1- or even 2-mile-per-gallon gain compared with the V12’s 15/21 mpg rating, especially on the highway.

Trimmed to 3,880 pounds, this V8 Aston is still no Lotus. But it does weigh some 1,200 fewer pounds than the current-gen Bentley Continental GT—and only about 200 more than the aforementioned, two-seat Mercedes-AMG GT C Roadster. In other words, damn light for the kind of two-plus-two, gentleman GT that you picture on the cobbled drive of some British manor or a Lake Como villa. Compared with the pricier V12, engine mounts and rear suspension bushings are stiffer, and there’s a bit more sinew in the steering.

With the V8 virtually moving down a weight class, Aston isn’t shy about declaring it the champion “driver’s car” of the DB11 duo. My personal scorecard reads the same after a day of driving in around the Pyrenees, skirting the French border just a few hours north of Barcelona. In traditional Aston fashion, this DB11 is content to cruise around in comfortable, commanding style, thanks to features like adaptive, driver-selectable dampers.

But even more than the DB11 V12—itself a significantly better handler than the old DB9—the V8 has a literal nose for curves. The lightened car feels tensed, more able to lean on its front tires, more eager to zig through fast directional changes. Anti-roll bars, springs and electronic stability controls are retuned to take advantage of the V8’s lighter mass. Dial up the Sport Plus setting—which also gooses the throttle, transmission and two-stage exhaust—and the body stays pancake-flat. But not flat like a Bentley or a beefy Mercedes S-Class Coupe, where you’re constantly aware that, for all the roll-taming suspension magic, the car itself is still a 2.5-ton whale that demands constant care and feeding. Instead, the Aston moves like a genuine sports car: Lithe, fun, and carefree.

It’s fast, too. The V8 may give up 97 horsepower to the Mack Daddy version, but its 513 pound-feet of torque nearly matches the 516 of the V12. Aston pegs the 0-60 mph run at four seconds flat, versus 3.9 seconds for the 12-cylinder. My hunch, confirmed by Aston, is that the V12 will only press its horsepower and displacement advantage at wildly supra-legal speeds; e.g., a drag race when you’re already going 100 mph. But unless your personal garage borders the German autobahn, how often are you going to do that? The V8 model tops out at 187 mph, regardless. And if straight-line boasts are crucial, the $17,500 an owner saves could cover some serious performance upgrades.

Nor does Aston simply uncrate the Mercedes-AMG engine and retire to the pub. The engine is “Astonized,” as the carmaker says, including a slimmer wet sump lubrication system to allow low engine placement. Naturally, Aston took pains to ensure that its GT—as opposed to AMG’s GT—makes the proper British noises. Instead of the bass-heavy, beer-hall racket of various AMG models (which we also love), Aston coaxed out more midrange and high frequencies, via a unique air intake and two-stage exhaust. Whatever they did, it worked: This DB sounds throaty, urgent, and expensive as hell.

The to-die-for styling offers only mild hints of that new engine below. The classic, slatted Aston grille is handsomely blacked out. Smoky-gray lenses wrap the LED headlamps and taillamps, versus clear for the V12. The V8 has a pair of hood vents, versus four for the V12, with a choice of new mesh screens in black or titanium finish.

If only the interior was as smartly integrated as the engine. Naturally, the DB11’s seating, leathers and mirror-matched woods are spectacular, including hides from pampered Scottish cows whose long hair ensures no visible bug bites, barbed-wire nicks, or other imperfections. But like a rushed surgery, Mercedes’ Comand infotainment system is shoehorned into a stingy console area, with hard-to-reach switches and haptic feedback that aren't haptic enough. (Leave it to the new Porsche Panamera to show how that’s done). Hard-ridged, coated-plastic armrest pulls are an affront to manicured hands. Seat controls are also awkwardly dainty, and relegated to a Siberia along the center tunnel. (To its credit, in response to criticisms over the initial V12 model, Aston has worked to better harmonize some of the V8’s interior trim bits.)

Enveloped by all this beauty and dunked in refined performance like a scone in tea, owners probably won’t do much grousing. As with Bentleys, BMWs and Benzes that offer a choice of V8 and V12 powerplants, however, they will need to do some deciding. Don’t get me wrong: There’s a lot to be said for the V12, from its magisterial sound to its greater eagerness to chase a higher redline of 7,200 rpm versus 7,000 for the V8. And obviously, most shoppers who can afford a $200,000 car wouldn't blink at spending $217,500.

Yet even from my plebeian vantage point, I’d grab the new model in the time it takes its crankshaft to fire all eight cylinders. The V12 model might feel a tad quicker on occasion. But the DB11 V8 handles better 100 percent of the time. And with the $17,500 I’d save, I know exactly which feature I’d demand first from the company’s bespoke Q unit: An Aston-AMG exterior badge. In platinum. Yeah, I’m classy like that.