Seicane Lets You Put an Android in Your Dashboard

No, not Data from Star Trek—this head unit runs on Android like a tablet, and also integrates with your car. 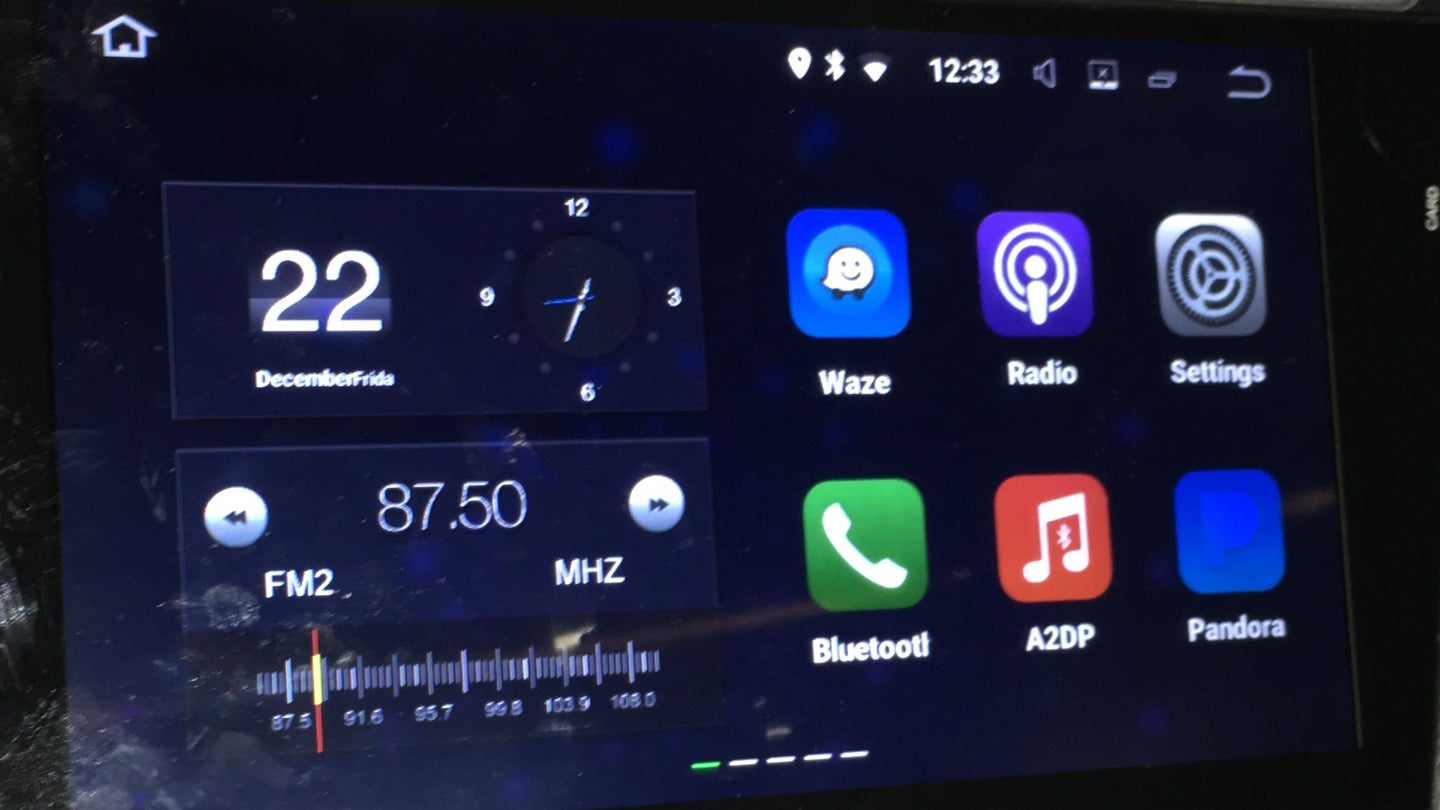 Despite extensive efforts by auto manufacturers, infotainment systems still don't measure up to what's available on our tablets and phones. Eight out of 10 Americans want Apple Carplay in their next car, and for good reason. Infotainment systems can be difficult to use and contribute to crashes, yet manufacturers seem more interested in enabling you to buy coffee while you drive than improve safety and the user interface. Apple CarPlay and Google's Android Auto are quick patches that do provide a more car-friendly interface for a limited number of applications. But why not just create an infotainment system that runs Android?

That's exactly what electronics manufacturer Seicane has done. Seicane makes not just head units, but complete kits available for a wide variety of cars that replace your factory system with an Android that's integrated with your car, yet allow you to run pretty much any regular Android app. When I saw that Seicane offers an Android system for my 2015 Subaru WRX I reached out to them to see about reviewing it. Seicane agreed to send me one for the cost of shipping the unit from China.

The particular unit I got is designed specifically for the late model Subaru WRX. It is preinstalled into a center dashboard trim piece like WRXs newer than mine, rather than simply replacing the double-DIN head unit that my car had (a first-year carry over from the previous generation). This unit replaces the fake carbon fiber trim piece surrounding the stock stereo with plain black plastic, which I honestly prefer. The kit also includes wiring harnesses to plug in any number of add-ons - a USB mobile hotspot, DVD player, cameras, DVR video recorder, etc. None of these are included with the head unit, but they are available if you wish to add them.

Installation is mostly a breeze in the WRX, with a little quirk or two. This video goes over the process in detail, but essentially, you gently pry off the trim piece around the stock stereo and unplug the wiring harnesses to remove it. Swap the vents, hazard light switch, multifunction display controller, and climate controls over to the piece provided by Seicane. Plug in the microphone for Bluetooth communication and the GPS antenna, since this unit doesn't use the ones already built into the WRX. Plug in USB port wiring, the AM/FM antenna, and the wiring harness adapter between the Seicane head unit and the factory wiring.

This wiring harness isn't perfect. I had to manually add a wire to send power to the WRX's AM/FM antenna booster when the head unit is on. Additionally, as wired the only steering controls that work are the volume and up/down toggles. The Mode button and Bluetooth controls don't work as it comes from the factory. A second jumper must be connected to enable them, and my research has not found the correct wire yet. This is fairly simple to do with wiretaps and a pair of pliers, but the process of identifying the correct wires may be intimidating to people not experienced in stereo installation, particularly since the kit includes harnesses for a Toyota as well. You could always leave the install to a pro, as well. I'll keep working on this issue until I figure out how to make it work. Seicane assures me that it is possible.

Once the wiring is all set and the original vents and controls are snapped into the new trim panel, carefully slide it into place, plug it in, snap it into the dashboard, and you're done.

Worthy of note before buying this unit is that it has no CD player, nor does it support Sirius/XM satellite radio, two features that even the WRX's most basic stereo has. If either of these features is important to you, you may want to look elsewhere since you will lose these functions with this system. Personally, I either stream music from my iPhone or through Pandora, so this was not a problem for me. There's also a microSD slot you can use to load up music on a card, plug it in, and play it on the road.

The Seicane Android head unit takes longer to start up than a standard infotainment system. So would any tablet or smartphone, regardless of operating system, so that's not a criticism of this particular unit. It starts by the time I get out of my garage and turned around in my driveway. It connects to my phone's personal hotspot by the time I get to the end of my driveway. By the time I get Pandora buffered up and Waze programmed, I'm about a mile down the road. Not a big deal, really, as long as I know what direction to head out of my driveway, which I usually do. If not, I can just wait a minute. You can also set how long the unit remains in a sleep mode after you turn off the ignition. This way if you're running a bunch of quick errands you won't have to go through the full startup process every time you start the car, yet it will shut off when you park overnight and not drain your battery.

When it starts the home screen features a clock, radio controls, and six selectable icons that you can program for your most used apps. I kept three of the stock settings but switched Google Play Music to Pandora, Google Maps to Waze, and Radio to Torque Pro (more on this later) since the radio controls make this icon redundant. You can also swipe right and left to scroll through all of the apps installed on the device.

After installation, I spent some quality time sitting in my garage connected to my home Wi-Fi downloading apps and configuring the unit the way I wanted it. This worked well, but I found it best to have the unit forget my home network and have it rely on my iPhone's personal hotspot for everyday use. When I started my car the unit would connect to my home Wi-Fi, then immediately drive out of range and leave it confused before eventually connecting to my iPhone. I can easily connect manually to my home Wi-Fi if I need to download apps, then disconnect afterward.

Don't expect endless processing power from the Seicane head unit. While it handles all of my normal driving tasks just fine, watching YouTube videos seems to be a bit too much for it to handle. Anytime I try, even connected to my home Wi-Fi, I get the sound of the video, but no pictures. If you want to watch a video, splurge $70 for the optional DVD player that connects directly to the head unit.

Being an Android, this unit comes with Google Maps preinstalled. But you can also download any other apps you want, so I immediately downloaded and configured Waze. It's been available through Android Auto since July, but here it runs natively right on the infotainment system. Having its somewhat traffic-avoiding navigation capabilities, plus the ability to send and receive reports of hazards, police, etc. right on a dashboard display that can be operated with gloves is almost worth the $425 price of this unit all by itself.

The screen is sharp, bright, and easily visible in sunlight. Animation, such as the map while you're driving down the road, is smooth. You can adjust how much the screen dims when your lights are on, at which point the buttons on the left side light up whatever color you want as well. I made mine red to match the rest of the WRX dashboard, making it look even more like a factory install.

One major problem with using a smartphone or tablet while driving is that their screens won't respond to touch if you are wearing gloves, or aren't wearing gloves with special capacitive fingertips for this purpose. Fortunately, this is not true of the Seicane head unit. During a recent cold snap, I had no problem operating it while wearing my usual driving gloves, a pair of cheap New England Patriots gloves with a rubberized palm and fingertips with no special coating. Aside from the bulk of the gloves themselves, operation worked just as well as with my bare fingertips. This is absolutely essential in a driving environment, and Seicane nailed it.

Yet another benefit is being able to plug a Bluetooth OBD2interface into your car and using your infotainment system as an interface with the car's own diagnostic unit. I skipped Seicane's OBD2 adapter and bought my own ELM327 off Amazon for under $10. I downloaded Torque Lite for free to test it, and upon confirming it worked I splurged the $4.95 for Torque Pro. So for less than $15 I turned my Android head unit into a fully functional OBD2 interface.

The ability to read and clear trouble codes was a lower priority for me since I already own a Cobb Accessport that will do that, though the app has a great interface for doing that which I will probably use instead of the Accessport if I have the need. But Torque Pro enables you to set up several screens worth of dials, readouts, and other displays to monitor any parameter the WRX's computer tracks. For example, I set up one screen with two large dials for coolant temperature and oil temperature to monitor easily when I'm lapping a race track. On another screen, I set up digital voltmeters to keep an eye on the battery while performing amateur radio communications at stage rallies and prevent me from needing a jump start at the end of the day. (Yes, I speak from experience here.)

Is It Worth It?

At the end of the day, is it worth $425 plus the sacrifice of CDs and satellite radio to run a pure Android infotainment system? After using the Seicane head unit for a couple of weeks, my answer is "absolutely." Even with the model-year-specific quirks in my car, installation was well within my moderate but not expert capabilities. Functionality is excellent, and now that it's set up the way I want it this unit is the ultimate tablet in the dashboard to handle all my infotainment needs better than any stock infotainment system I've seen. Chrysler's excellent Uconnect system comes close in functionality, but even it lacks the flexibility of the Android operating system to set this up any way you want.

Is having an Android on the dashboard distracting? No more than any other infotainment system. In fact, I've found there to be fewer distractions than when I used my phone for Waze and Pandora. I intentionally did not set up notifications for new email or Facebook messages, so I'm not tempted to read them while driving, even while stopped safely at a red light. So in that way, I would say having the Seicane head unit in my dashboard is safer and less distracting than using my phone.

There are less expensive head units out there that emulate much of this functionality—for example, the Sony XAV-AX100, or the Pioneer MVH-2300NEX. But you will need to pay extra for wiring harnesses and installation hardware, which drives the price higher than the Seicane unit. Plus these other head units are only Android Auto and Apple CarPlay compatible. They don't run the Android operating system natively like the Seicane.

It may be a little too geeky for some people, but I'm a geek, and I think it's great. Although my unit was designed specifically for the Subaru WRX, Seicane makes them for numerous vehicles, as well as the standard double-DIN head unit size that many cars use. If you're looking for an infotainment system that packs a bit more punch and provides more flexibility than most, I'd recommend this one.