Upgrade Your Sound With These Android Auto Head Units

It’s time to graduate from cassettes to Android Auto.

Adding an Android auto head unit to your car gives you more options when it comes to choosing tunes, directions, and style. Many cars come with a boring head unit that’s only capable of playing music. Choosing your own Android head unit gives you much more customization. You can connect it to your phone, have it guide you with GPS, and listen to a larger selection of songs through Spotify, Pandora, etc. Here are the best Android auto head units you should consider if you’re looking to upgrade.


One of the best ways to breathe life into an old car is to upgrade the stereo. But this isn’t a job for any old head unit. If you’ve got an Android phone, the best solution for your car stereo is one that includes Android Auto. The smartphone interface lets you mirror many of your Android’s best features right in the dash of your car, including music, texts, navigation, and more.


Finding an Android Auto head unit is easy, but finding the right one can be a little more difficult. I’ve scoured the internet to find the best Android Auto head units in a variety of categories. And I looked for products with great reviews that should also be easy to install at home. Let’s take a closer look at what I found. 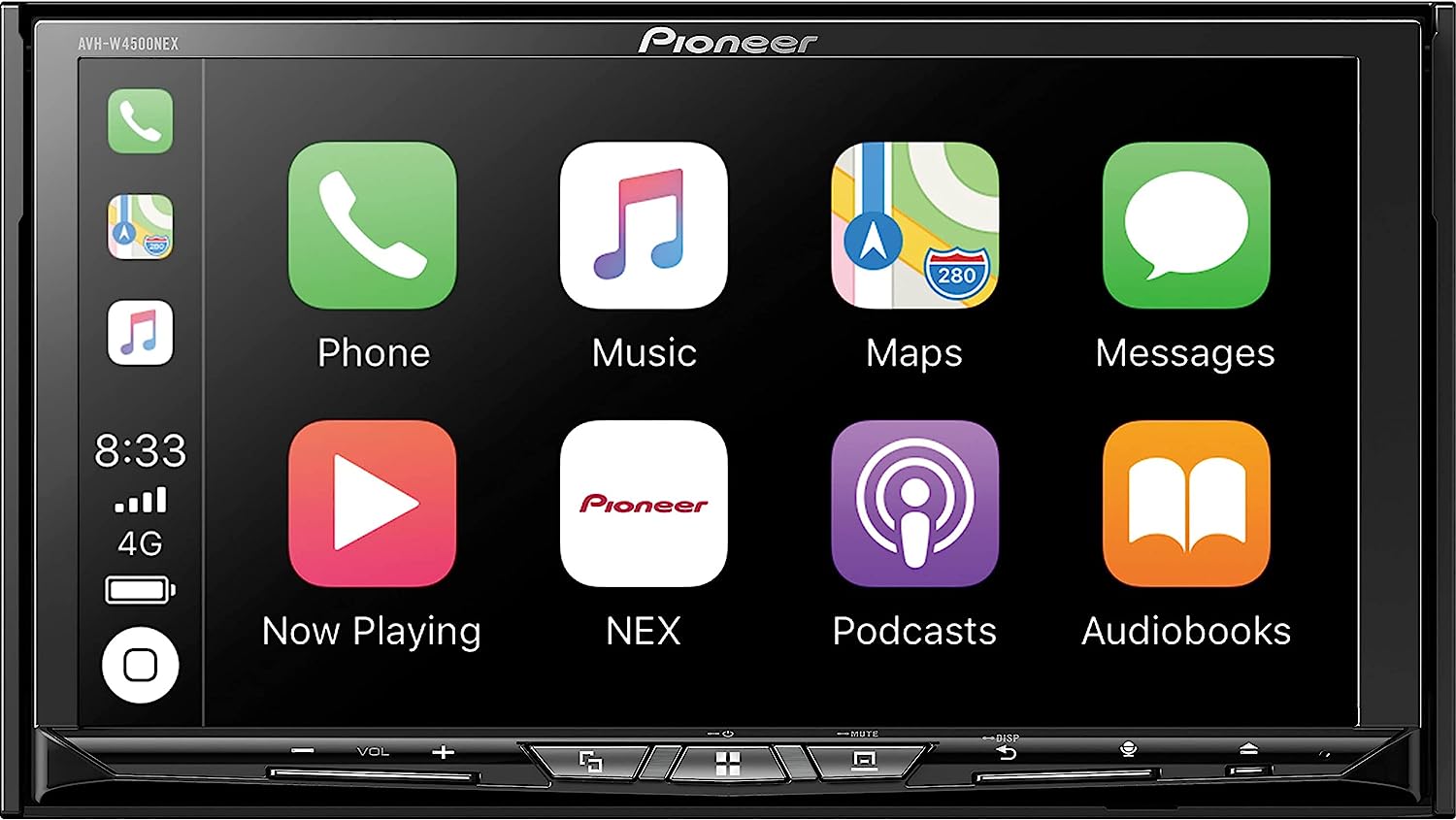 The Drive’s editors love car audio, and have spent years working with products of all types. We looked for Android Auto head units that offer great value and quality, but also for those that are easily installed at home for most people.

There’s nothing more satisfying than pulling off an audio upgrade, so it’s important to find head units that work for DIYers. We cut products with several bad reviews, or that note difficulties with installation to find the best handful of head units on the market today. If you want to learn more about how we select the products we do, head to The Drive’s Gear About page for more information.

Though the W4500NEX is more expensive than many of its rivals, it offers a solid feature set and wonderfully simple operation. The system comes with wireless Apple CarPlay and Android Auto, which is aided by the unit’s excellent Bluetooth connectivity. Startup is quick, and the phone connects effortlessly, making the Pioneer a joy to use on a daily basis. There’s also Amazon Alexa functionality that enables news, weather, and interactions with other Alexa devices. One downside here is that the Pioneer does not come with a backup camera in the box. The connections are there, and the head unit even includes handy guidelines for backing up, but you’ll have to spring for the camera yourself. The good news is that the Pioneer has inputs for SiriusXM, HDMI, and other sources, so you can wire up the unit as a powerful multimedia hub for your car.

Alpine struck a great balance between price and functionality with the iLX-W650. The head unit is easy on the wallet and brings most of the features that people expect in an upgraded stereo. Alpine’s interface is straightforward and easy to use, and there are plenty of audio controls for people who like to dig deep into settings and customize sound. That said, the stereo does not offer the level of color and layout customization that brands like Pioneer include. Alpine includes physical controls on the iLX-W650, which makes it easy to control the unit while the vehicle is in motion. Installation is also a breeze, as there’s plenty of cabling for the microphone and USB inputs. The unit’s shallow design also means it’s able to be installed in tight spaces where the open area behind the dash is limited.

Sony hit a home run for value and functionality with the XAV-AX3200. The compact design allows it to be installed in a single-DIN unit, and it offers Apple CarPlay and Android Auto functionality. It also offers features that are sometimes withheld for more expensive units, such as SiriusXM radio and WebLink functionality. Sony built in physical controls for quick access to volume, tuning, and settings, making the unit easy to use when the vehicle is moving. Because of its price, the Sony offers a smaller screen than some other units, but it’s at least responsive and looks great from almost any angle. Though the Sony features a single-DIN design, the screen is still 9.5 inches, so you’ll want to be sure you have room to install. That said, Sony includes all the connections you’ll need to set up inputs, a rearview camera, and other accessories. The XAV-AX3200 also features Sony’s quick wake-up feature, so the unit quickly gets up to speed once the vehicle is started.

The Pioneer DMH-WT8600NEX is far from cheap, but it’s one of the most full-featured units on sale today. It’s also one of very few aftermarket head units that can deliver an infotainment experience that rivals the systems found in new cars from the factory. The large 10.1-inch touchscreen is vibrant and easy to see from almost anywhere in the vehicle. On the downside, the large display can limit your ability to install in some cases, as it can block other controls or displays. Pioneer built in two camera inputs, so you can install both forward and reverse cameras, and the unit offers the ability to use images as backgrounds. There’s no included SiriusXM receiver, so you’ll have to find a separate component to listen to satellite radio, but the unit has memory card inputs and can handle a variety of music file types.

The JVC KW-Z1000W features a super slim design that makes installation a breeze, and its large screen means you can have a high-end infotainment system in almost any car. The unit offers tilting and position adjustments that allow you to dial in the exact screen angle for the best view, and live wallpapers lets you sync the screen appearance with the current playlist. JVC offers two smartphone connections and four camera inputs, so you can wire up external views in off-roaders or to help maneuver tight city streets. Many users report needing additional components to install the JVC, such as wiring adapters and harnesses. Others report that the unit came out of the box missing necessary install components, so it’s vital that you check for completeness before attempting to start an install. Finally, you may want to carry a microfiber cloth to clean fingerprints, as many owners say the screen attracts dirt like no other.

The Kenwood Excelon head unit offers great functionality and a clear 6.95-inch touchscreen display. Apple CarPlay and Android Auto are included, along with built-in Waze functionality and controls for Pandora and Spotify. The double-DIN unit does take up some space, however, so you’ll need to be aware of your car’s limitations when trying to install the Kenwood, and like other big-screen units, you may find that it blocks other buttons and controls. Like others on our list, Kenwood added physical controls to the Excelon unit that provide quick access to various features, including settings and the main menu. The Kenwood also offers parking guidelines when a rearview camera is equipped, a bonus not often provided in aftermarket displays. The screen resists glare and remains highly visible, but it is a fingerprint magnet. That said, the unit is responsive and quick, and the physical controls help make it less distracting to use while driving.

Our Verdict on the Best Android Auto Head Units

Pioneer offers the best feature set and construction of the bunch, and though the Pioneer AVH-W4500NEX is far from the cheapest head unit on the market, it’s one of the most full-featured and easy-to-use. You get what you pay for, and it’s surprisingly easy to make a bad stereo purchase, so steer clear of brands and names you don’t recognize, unless you’re willing to put in the time and do the research.

What to Consider When Buying Android Auto Head Units

We know you’re looking for a head unit that offers Android Auto, but what else are you after? Do you need wireless smartphone connectivity? Is a GPS antenna important to you? Stereo head units come with lengthy features lists, so you’ll want to be sure you’re getting what you need.

Yep, we get it. You want to buy the biggest, best head unit you can find. Take a step back, though, and you might find that you don’t have room for such a large screen in your car. It’s also important to note that most head units come in either single- or double-DIN sizes, so you’ll need to figure out which one you have before buying.

Aftermarket stereos present big targets to thieves looking at breaking into cars, so you might want to shop for a unit with a removable faceplate. Even if you live in a safe area with little to worry about, the sight of a large stereo touchscreen might be enough to tempt a would-be thief that would ignore your car otherwise.

You can spend as much or as little as you want for a new Android Auto head unit, but you absolutely get what you pay for. Sites like Alibaba and others sell generic Android head units for as little as $150 or so, but you’ll be missing out on many features, you’ll have to wait a long time for delivery in most cases, and you will be out of luck if you have difficulties during installation or use. In general, expect to pay between $400 and $1,750 for a head unit, depending on the brand and feature set you choose.

Q: Can you put a new stereo in any car?

A: If you have a newer car with an existing touchscreen stereo, you may not be able to change it for another unit. It’s best to check with your dealer to find out which functions are compatible with a new screen and to determine what you’ll be giving up by changing the unit.

Q: How much does it cost to have a stereo installed?

A: Installation costs will depend on your car, but can also vary based on other services you opt for during the process. If you want to add speakers or a subwoofer, you’ll pay more. The same goes for backup cameras and other devices. Most installations can be done for between $100 and $200, but more complex installs can reach $500 or more if there are custom fabrication needs.

Q: Do I need a special wiring harness?

A: This depends on your car, but in many cases, the answer is yes. You may need a wiring harness to continue using steering wheel controls or to allow the head unit to work with existing amplifiers and speakers.

Q: Is it hard to install an aftermarket head unit?

A: Difficulty depends on your car and on your skill level. If you are confident and have done the job before, stereo installs are not the most difficult project. However, if you’re unsure or think your car will require some fabrication to allow a stereo to work properly, it’s best to contact a pro for help.