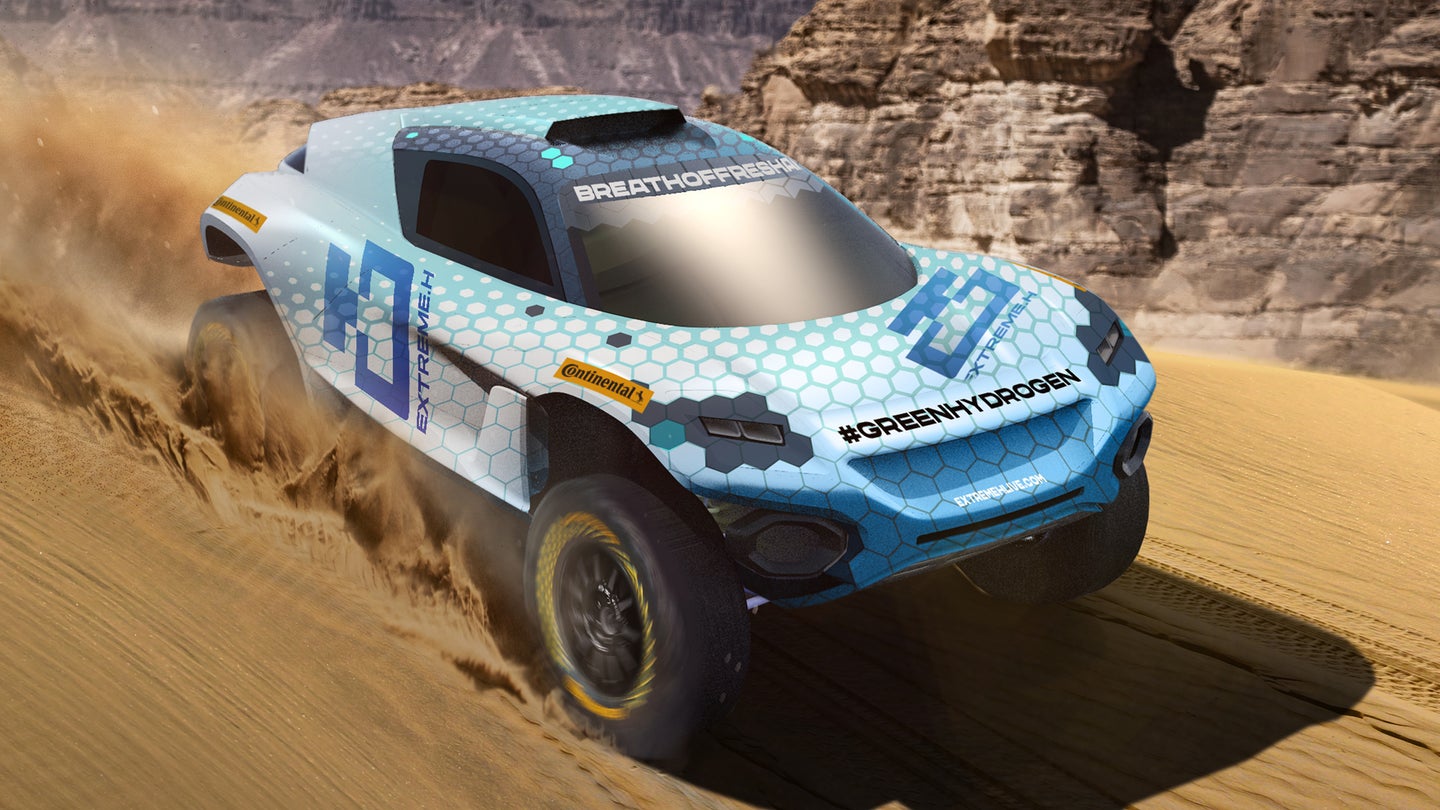 Over the weekend, Extreme E announced it will run a hydrogen fuel cell version of its Odyssey-21 off-road racer starting 2024, alongside the battery-electric series that's already in place. Although the fuel cell stack hasn't been developed or decided on yet, it'll use the same motors and powertrain as the battery version and will compete on the same courses. It'll be the first time multiple hydrogen fuel cell-powered cars compete against each other, especially alongside battery-electric ones.

After getting through its inaugural season last year, XE is setting off around the world again with the first round in Saudi Arabia this weekend. The field's still stacked, with three teams backed by F1 champions (Rosberg Xtreme, X44 and JBXE are owned by Nico Rosberg, Lewis Hamilton and Jenson Button respectively) and world rally champs across the grid (Carlos Sainz Snr, Sebastian Loeb), as well as names like Ganassi and Andretti backing up other entries.

The idea is to go to remote locations affected by climate change, work on legacy and scientific projects there and then hoon massive electric SUVs around. And to be fair, it's got a lot of people interested. The gender-balanced teams and environmental message are the kind of thing that slightly lets you off the guilty hook of enjoying motorsport while not hating the planet and everyone on it.

XE's already been using cleanly generated hydrogen to power the generators that charge its battery-electric cars, so it makes sense to extend those hydrogen fuel cells to the cars. The limitation on hydrogen fuel cell stacks tends to be that they have relatively low power output, compared to the capability of battery-electric, and that cars with them need an onboard, auxiliary battery to regenerate electricity under braking for range extension and efficiency. But the Odyssey-21, slightly weirdly for a race car, doesn't actually have regen and is already so big it's easily got the capacity to hold a hydrogen tank onboard.

The other challenge with fuel cell stack cars is having to make them robust enough to safely store the hydrogen tank, but we've seen some pretty darned dramatic crashes in the Odyssey-21. In the announcement, XE confirmed that the plan is for the hydrogen-powered cars to compete at the same events and as part of the same calendar as the battery-powered ones, possibly in an IMSA or WEC-style double-category competition, like with prototypes and GTs.

“Extreme E was designed to be a testbed for innovation and solutions for mobility," said Extreme E CEO Alejandro Agag. "It has become increasingly clear to us that creating a hydrogen racing series is a natural evolution of our mission to showcase the possibilities of new technologies in the race to fight climate issues.

“Together with the current Extreme E Teams we will decide in the coming months the best way to integrate the Hydrogen-powered cars into the racing weekend," Agag continued. "Two separate categories, full transition to Hydrogen or joint racing are all options on the table.

“Extreme E is an FIA International Series and our intention is to work closely again with the FIA and the Automobile Club de Monaco on the development of Extreme H. Sport is the fastest and most effective platform for driving innovation, and by using the existing Extreme E platform we can also utilize our transport, talent, and operations to ensure we are minimizing footprint in the process. This effectively means we can have double the race action, with marginal additional impact.”

The future of racing has its uncertainties, but Tanner Foust thinks Extreme E provides a solid model going forward.

McLaren Is Going Off-Road Racing in Extreme E Next Year

The team from Woking is a legend on track and now it’s going rally racing.