BMW Is Stress Testing Its Hydrogen Drivetrains With Hand Grenades

BMW is blowing stuff up in the name of safety. 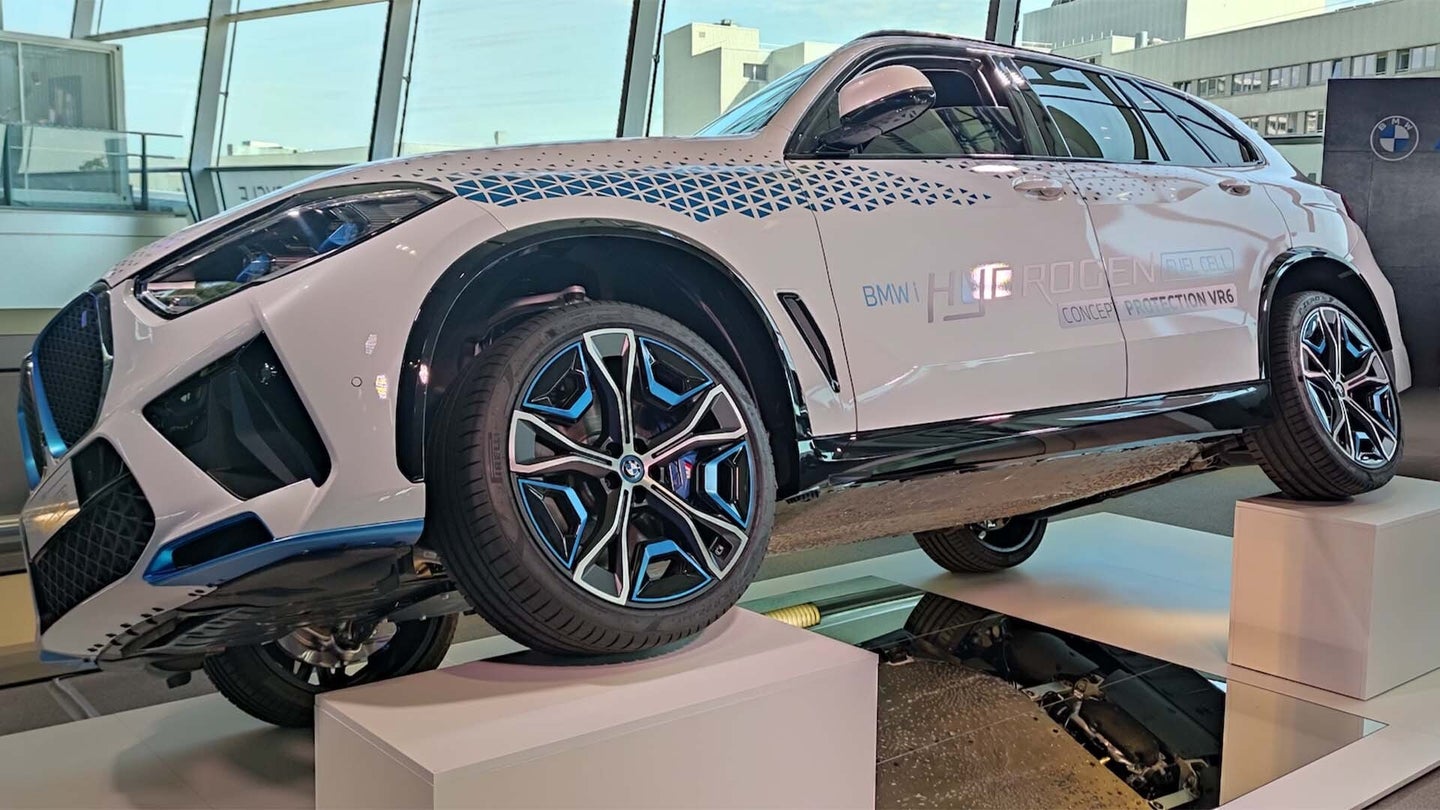 For most of us, knowing that we're traveling in a car with adequate safety standards is good enough to make us feel safe. This is mostly because some automakers have been building cars for over a century now, so they know how to keep the important bits—like a fuel tank—from exploding in the event of a crash. As drivetrains evolve, however, so will the need to test the safety of new components, which is why BMW is literally blowing up hydrogen fuel cell SUVs with hand grenades.

The German automaker recently built a prototype hydrogen fuel cell stack for an armored BMW X5 SUV, and went as far as testing it in an explosive manner to make sure the hydrogen tanks remained intact in the case of an attack.

During a recent trip to BMW Motorwelt, we were shown this prototype and told all about the technology that goes into the chassis, body, and all the different bits to armor the X5. We've actually covered this in-depth before if you want to check it out. However, the interesting bit here is that this armored X5 runs on hydrogen, of all things.

The armored vehicle division of BMW doesn't talk to the media very often, because, as you guessed it, a lot of its work is very discreet by nature. But it decided—rightly so—that it had a story worth telling here. It wasn't wrong.

My first question was, why use a hydrogen fuel cell car as an armored vehicle? They don't have nearly the range or the horsepower to be useful in any kind of conflict or getaway situation. The answer to that question had to do with size and proportions. As a separate project, BMW had built a concept fuel cell stack hybrid powertrain for an X5 (pictured below), and because of the size of the thing, it had to go in an enormous vehicle that could be modified relatively easily.

Up front, you've got the 125kW-output fuel cell stack which, my goodness, is not small. Then there are the two tanks—one lying lengthways, one sideways—that hold the 6 kilos of H2 (hydrogen). Right at the back, you've got an electric motor that works with both the power from the fuel cell stack and the battery (on top of it) to up the power output of the car to a more reasonable level.

The tanks are separated because of the difficulty of packaging, not due to limitations on the size of hydrogen storage. The X5 I saw had this setup and it had a raised section through the whole center of the car to accommodate that long tank, which looked weird and slightly unnerving even in a stationary car where nothing was really happening.

Hydrogen is, as anyone who's heard of the Hindenburg will know, highly explosive. It's this volatility that makes it work for a fuel cell stack because of its super reactive nature. Because of this, you don't necessarily want things like bullets or shrapnel piercing the tanks. You know, things that most people with normal cars don't have to deal with on a regular basis, but people in armored cars are always fearful of. If something were to penetrate the canisters, it'd essentially set off a bomb.

In order to test the armor's robustness, BMW kindly asked the German military if it could go up into the Alps with a stripped X5 chassis fitted with that long H2 tank (without the hydrogen) and titanium base plate for armored vehicles.

In a top-secret facility and under military supervision, BMW claims to have detonated hand grenades under the chassis, with the base plate taking the damage shown above with flying shrapnel. I wasn't allowed to take photos of the video actually showing this, but you can see in the photos above the kind of hell that was unleashed on that chassis.

What's amazing is that BMW claims the tank survived absolutely fine. After running every possible scan for damage or leaks, it was able to show that had the tank stored hydrogen, it would've been safe during and after the blast. It didn't even need replacing.

I even got a taxi ride in the fuel cell X5 later that week, and I gotta say, it felt very nice. Sure, we were in Munich traffic but it felt to have all the characteristics of a quick electric powertrain with the benefits of running on hydrogen and, of course, being armored.

It's not exactly clear how BMW will use the knowledge gathered from this test, but it's safe to say that it could be applied to everything from tank reinforcement on non-armored hydrogen vehicles, crash safety, to other specialty applications. Only time will tell.

Got a tip? Email me at hazel@thedrive.com