What you must know about this weekend's oceanfront race. 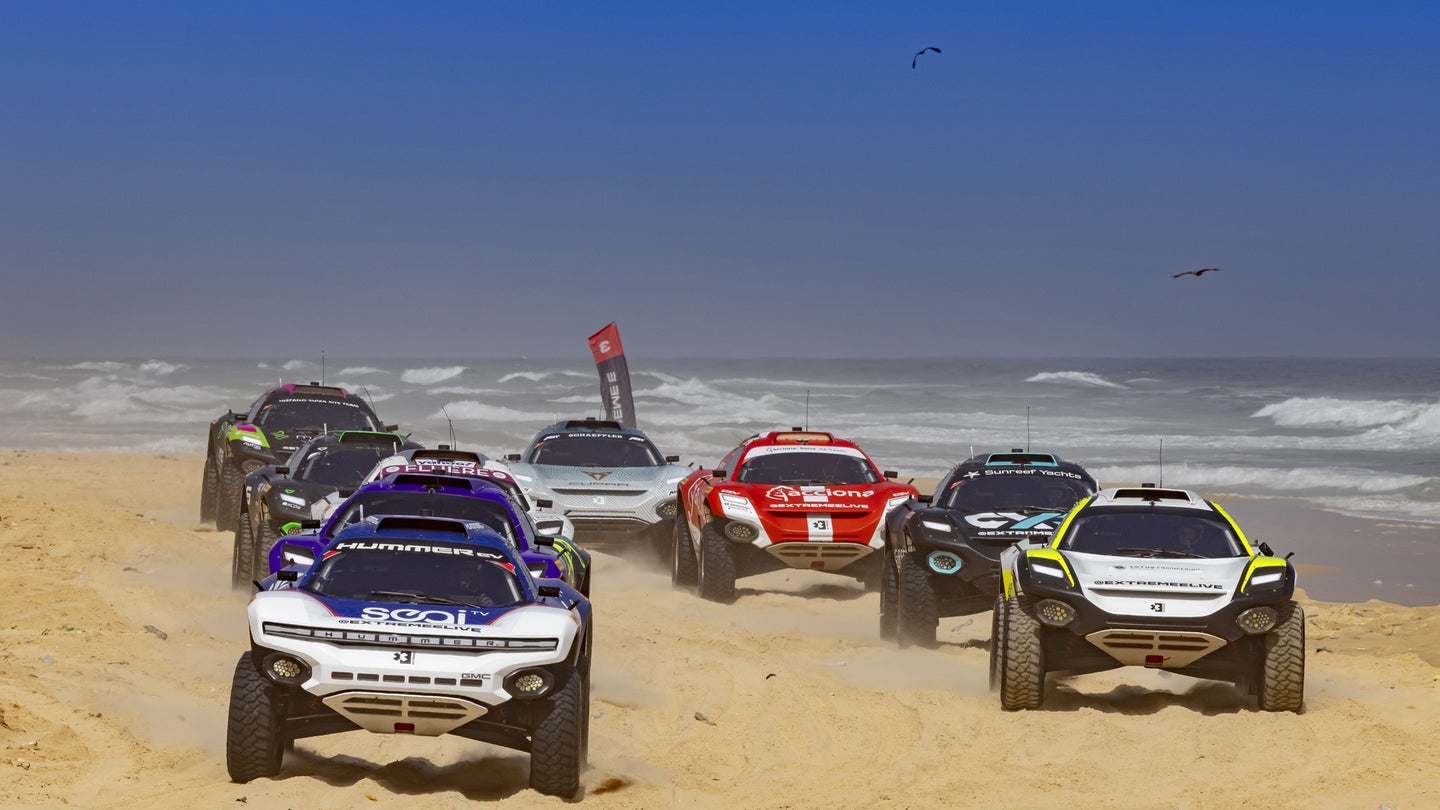 Extreme E's boat full of race cars has docked in Senegal after kicking off its season in Saudi Arabia (now home of the Dakar Rally), where it's racing this weekend at Lac Rose, the original site of the Dakar. The whole idea of the series is to go off-roading in some of the environments most vulnerable to pollution and climate change caused by humans, with the Ocean X Prix aimed to highlight the problems of over-fishing, sea plastics, destruction of habitats like coral reefs and the million other really bad things we keep putting in the sea.

The site picked is Lake Retba, where the cars will be hooning it along the beach before heading up into the dunes for some twisty-turny action. Extreme E's first event had issues with sand trails and desert dust, meaning it was impossible for the cars to follow each other, so there was a planned recce in Senegal that ran the proposed route to make sure the same problem wouldn't occur.

Rosberg Xtreme, the team owned by former Formula One world champion Nico Rosberg, took the lead in the championship after the Desert XPrix. It narrowly beat team X44, owned by current Formula One world champion and former childhood friend/adult frenemy of Rosberg's, Lewis Hamilton, who'll be looking to fight back. As will Acciona Sainz, the team owned (and driven for) by multiple-time Dakar winner and world rally champion Carlos Sainz. It's one of those grids.

One champion stepping out of the car is Jenson Button, who drove for his JBXE team in the Desert Xprix but will be keeping it strictly to team boss activities, handing over the keys to the Odyssey-21 to rallycross driver Kevin Hansen, who'll share with continuing driver Mikaela Ahlin-Kottulinsky. But enough about drivers. What you want to know is where they're going to be chucking it about.

One of the problems with the course in Saudi Arabia was that it was rarely wide enough for the huge trucks to run alongside each other, although drivers seemed incredibly willing to give it a go. This track, with the wide beach section, definitely goes a long way to fixing that so there's plenty to be excited about this weekend.

Especially for Veloce, one of three teams to suffer major crashes during the Desert XPrix and the only one not to be able to continue the event. A ding in the roll cage of its vehicle meant it was deemed unsafe to run and there was no way to repair it in remote Al-Ula. Such is the nature of Extreme E.

“I feel like I have the same level of excitement for this race as I did for the Desert X Prix in Saudi Arabia," Veloce driver and W Series champion Jamie Chadwick said, ahead of this round. "Obviously, I only got the one lap in during the shakedown session so that just gave me a little taste of what Extreme E is really like – and it was amazing! This weekend, I want more of that feeling and to really get my teeth into this series."

“I think in other championships my lack of track time would really hurt the team in this next race, but because each location is so different to anything the drivers have done before, I don’t think we’ll be at a huge disadvantage."

“The only goal I have this weekend is just to get some solid points on the board. You have some bumps in the road and difficult rounds every year so hopefully, we got ours out of the way early on," Chadwick added.

One of the cooler things about the series is that it's so weird no one really knew what would happen, so there's definitely a chance for some killer moments. Virtually unknown boutique vehicle manufacturer Hispano-Suiza managed to cause an upset by beating the likes of Chip Ganassi and ABT-Cupra in the desert,

The Ocean XPrix qualifying will be broadcast tomorrow, Saturday, May 29, on Fox Sports 2 and the final on Sunday, May 30 on Fox Sports 1.

Got through your week in automotive journalism without writing about an electric SUV? Tell me how on hazel@thedrive.com