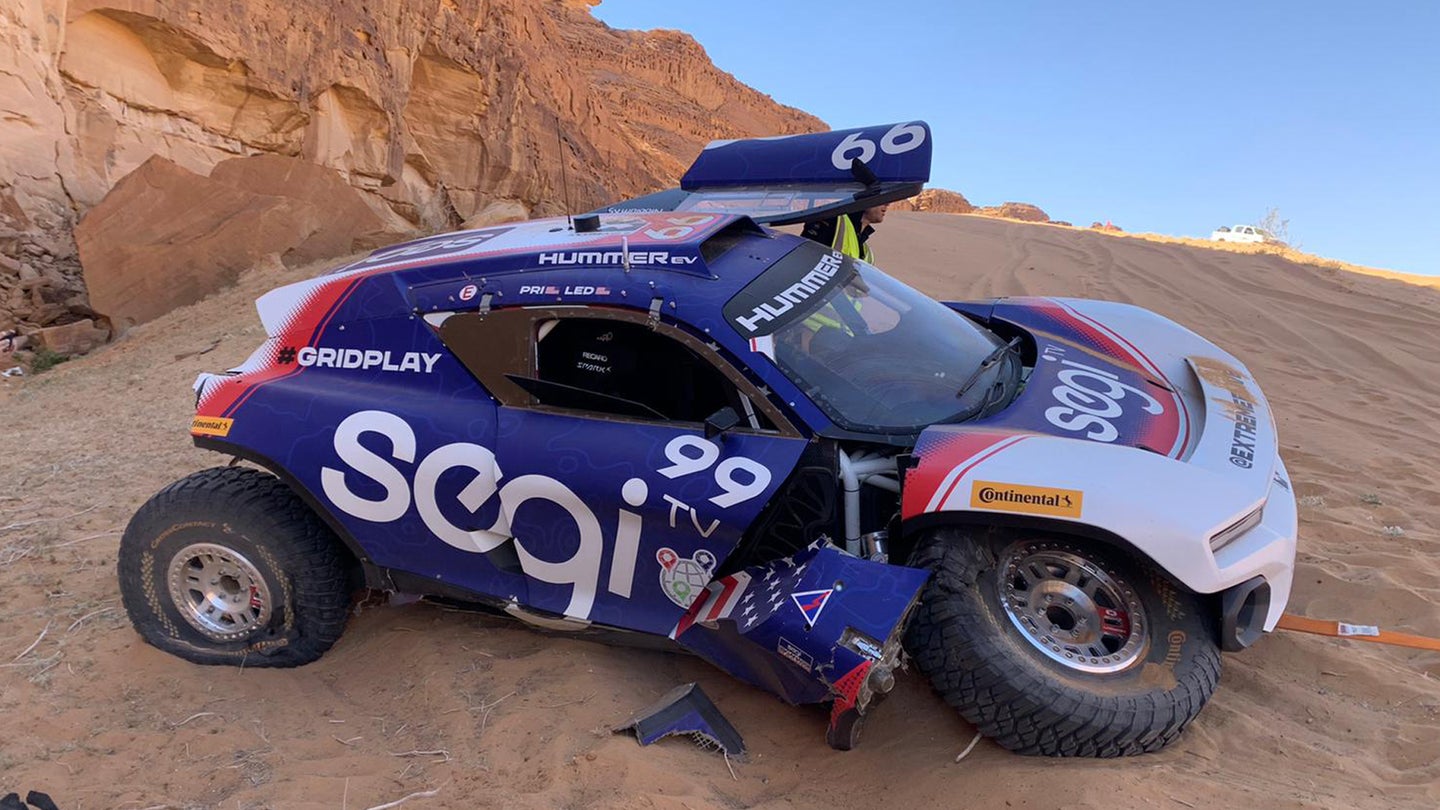 The first-ever Extreme E race weekend is underway. The ship carrying the whole heckin' series, cars and all, managed to get through the Suez Canal before chaos broke loose and nine electric SUVs have made it into the ancient desert of Al Ula, Saudi Arabia. Remarkably, given the teams hadn't seen their racers since February—or even earlier, depending on where they're based—when the St. Helena's "floating paddock" set off from Liverpool, there were relatively few technical problems getting them going for the two shakedown sessions today.

Chip Ganassi Racing's Friday had, admittedly, started badly. When former motocross racer Sara Price took the team's Hummer-themed Odyssey 21 out on the first shakedown, the very first car to tackle the 18-kilometer off-road stage through vertical dunes and what's best described as "large-ass rocks," disaster struck with a total failure about two-thirds of the way through. Fortunately, whatever the error was, the small team of mechanics and engineers out there (Extreme E limits personnel on site to keep its environmental toll down) was able to get the car going again by the time the second shakedown happened.

The six-time Lucas Oil Off-Road Series champion Kyle LeDuc took Chip Ganassi's car out for its second run but hit a rock partway through the course, ripping the side of the Odyssey's bodywork and taking out both right-side wheels, forcing the team to retrieve their car for a potentially huge repair job tonight. LeDuc was fine and able to confirm he was ok to the team but the car itself wasn't able to roll away.

The Odyssey 21 itself is common to all teams this season, with powertrains, batteries and bodywork—made from a low-carbon, non-shatter carbon fibre alternative that's fashioned from flax by Swiss company Bcomp—supplied by the championship. There should be parts available for CGR to make its repairs, it's just whether the team can do them from what's essentially the same sort of "blow up" tent used by the military and humanitarian agencies in the field, in the pitch dark, far from pretty much anything.

Extreme E's qualifying starts at 9 a.m. local time (April 3 at 2 a.m. EST) so there's a serious race on before real action even starts. If Ganassi is lucky, it's been drawn low down the qualifying order for the outfit's first run so they'll be able to grab a bit more time. If they don't get out in the first qualifying run, there's another potential attempt to classify but that puts all the pressure on their second run—the first time the team will actually run the whole course, as a consequence of the problems they faced on both shakedown attempts today.

Extreme E's qualifying and race sessions will be broadcast in the U.S. by Fox Sports.

This Ship Is Carrying an Entire Electric Rally Racing Series, and It’ll Be Sailing the Globe for a Year

The ship will lower Extreme E’s carbon footprint by carrying all team and series personnel, cars, gear, and not return home until the season is over.