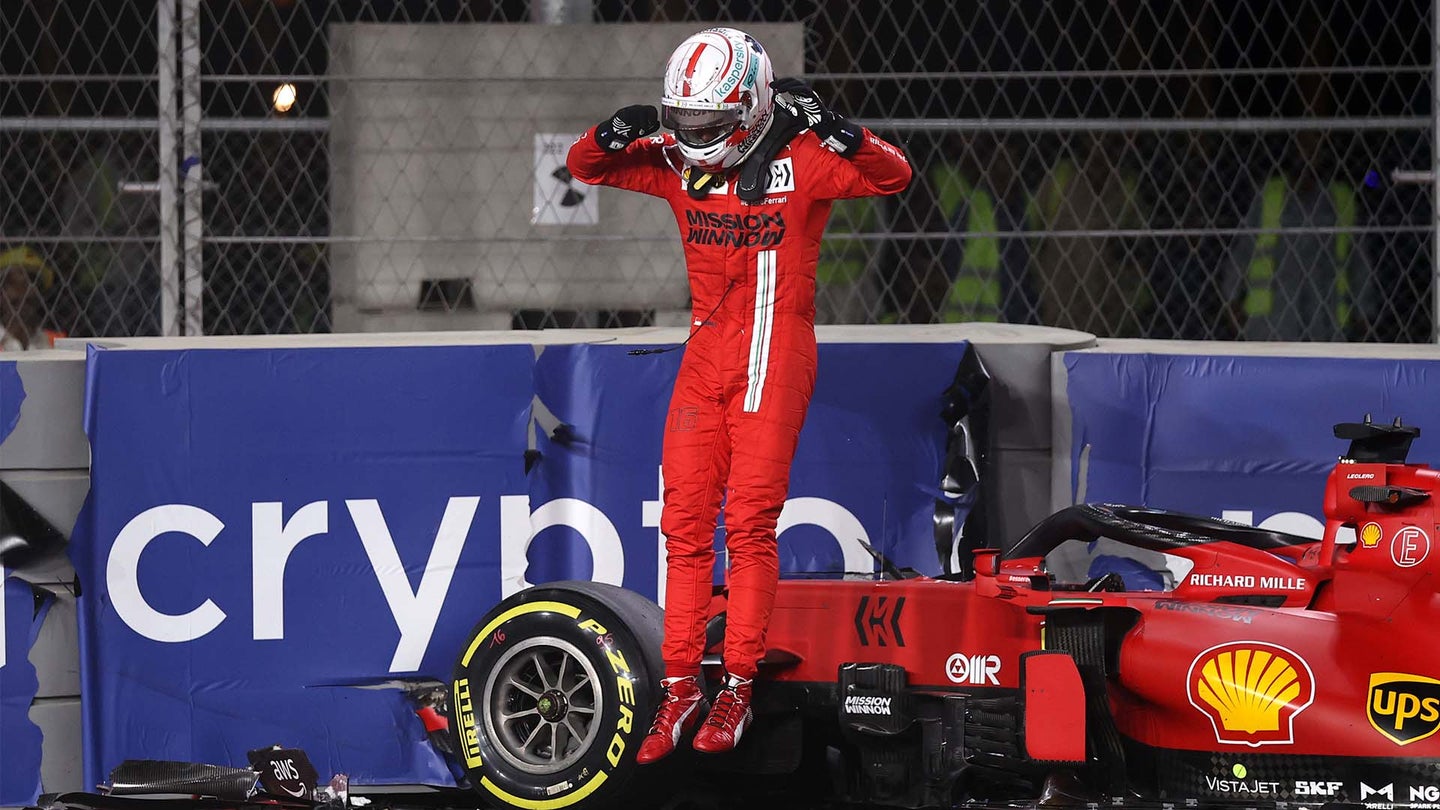 Formula One's penultimate weekend of the fierce 2021 title rivalry is underway at another brand-new-to-F1 circuit. Unlike Losail International, which hosted the Qatar Grand Prix a couple of weeks back, Jeddah Corniche Street Circuit isn't just somewhere F1's not been before—it's never had any cars running on it at all. In fact, it's barely been built.

So far there have been a couple of big crashes at the ultra-high-speed section around turn 22. Charles Leclerc took a 150-mile-per-hour trip into the Tecpro barriers, and modern safety standards are to thank for the fact he was able to clamber out of his mangled Ferrari. But on a narrow street circuit that only got signed off on yesterday, with the pressure of the drivers' and constructors' titles possibly being decided here, the tension's never been higher than around Jeddah Corniche. And that's before you even start thinking about the human rights situation beyond the track.

Up until today, when cars finally got out on track (after a few delays, more on that later), no one really knew how Jeddah was going to work. Even the usual detailed modeling that teams or F1's tire supplier Pirelli might normally do wasn't possible because there was no surface to look at. And anyway, the rigors of the calendar had everyone half the world away in the Americas just a few weeks ago.

What we knew was: it's an incredibly high-speed circuit with a calendar-beating 28 corners. Being basically the shape of a kirby grip with three DRS zones, drivers were predicted to be spending 79 percent of a lap on-throttle, with average speeds around 250 kilometers an hour (155 mph) between the street circuit walls. That's cool and technical and tricky and everything F1 should be, but not something you wanna do on a circuit with build concerns.

Finally we got to see an onboard yesterday when the Aston Martin safety car went out on a very, very dusty track. That was shortly after the circuit was actually signed off as homologated for F1, less than 24 hours before the first session—rather than the FIA-suggested minimum of, uh, two months. The scramble to build the circuit had been obvious when, on Nov. 21, organizers were still promising it'd be finished in a few days. And we've all missed a few deadlines, no judgment here, but you can't really push back a Grand Prix.

Street circuits for some series, like Formula E, take a matter of days or at the absolute most weeks to put together. Even established tracks like Albert Park, the host of the Australian Grand Prix, take months to assemble for F1; in 2019, work started on the Melbourne track in early January for the race in mid-March. Constructing a totally new track, requiring pit buildings and infrastructure—including floodlighting—is a whole different business

Jeddah was announced to host a Grand Prix in November last year and the design got confirmed in March but alarm bells started ringing about the construction when it looked like this in September.

That's not ideal for a new circuit with a lot of work taking place to construct track buildings. And there's no way of sugarcoating the fact a lot of it clearly got deprioritized in order to get the track ready. Several entire grandstands seen on early plans, most notably at turn three, are absent and there are a lot of what you'd call unrefined areas that still look like construction sites between the parts of the track, on any overhead.

Today was the first day of actual running and it didn't start well. A local Porsche Sprint Cup series did get some track time but then, for unspecified reasons, F1's junior support series Formula 2 had its practice session pushed back first by 25 minutes...then by another 25, until drivers had basically been sitting around in their race gear for the best part of an hour before the pit lane opened. When there's no obvious explanation for what's happening, this is the sort of thing that makes people nervy.

Fortunately, once they were actually out on track, things seemed to go well. F2 is a junior series and you do expect a few mistakes, especially with four drivers stepping into the cars for the first time this weekend. One of those, Logan Sargeant, smacked the wall hard with the rear of his car at turn 22 and cut his session short, bringing out a brief red flag. His HWA teammate Alessio Deledda did a similar thing at turn one later on in the session but otherwise, Dallara's spare parts garage wasn't needed, despite fears there could be carbon fiber carnage.

Drivers had been tentatively interested in the track before getting out on it. Pierre Gasly said he expected it to be tricky but fun while Mick Schumacher predicted "a lot of red flags." F1 managed to get through one entire hour of practice without getting into a tangle but now that the sun's gone down and cars are pushing under the floodlights, quite a few issues are popping up.

The first is that there's nowhere for cars to go on an out or in-lap, going slowly, while other cars are ripping around the circuit. This is especially troublesome with the high speeds predicted. Even in first practice, Max Verstappen was hitting averages of over 148 mph and almost all cars were quickly taking turn 22, a kink in what's almost a parabolic 'round the back of the circuit, completely flat-out.

That was where Charles Leclerc finished FP2, in a massively high-speed crash into the Tecpro barriers. Leclerc said he was fine (although the g-force meter signaled he had to go for medical checks) but his car definitely wasn't. Luckily no other cars were close enough to get collected as Leclerc skidded across the track and hit the barriers with basically all of his Ferrari. The layered Tecpro did its job to absorb the impact, too, but seeing chewed up barriers on a Friday is always pretty disquieting at an unknown circuit.

The 10 Best Gifts for a Formula One Fan

Early mornings, late nights, discrepancies with FIA’s stewards… being an F1 fan is tough, so give them a cool gift.