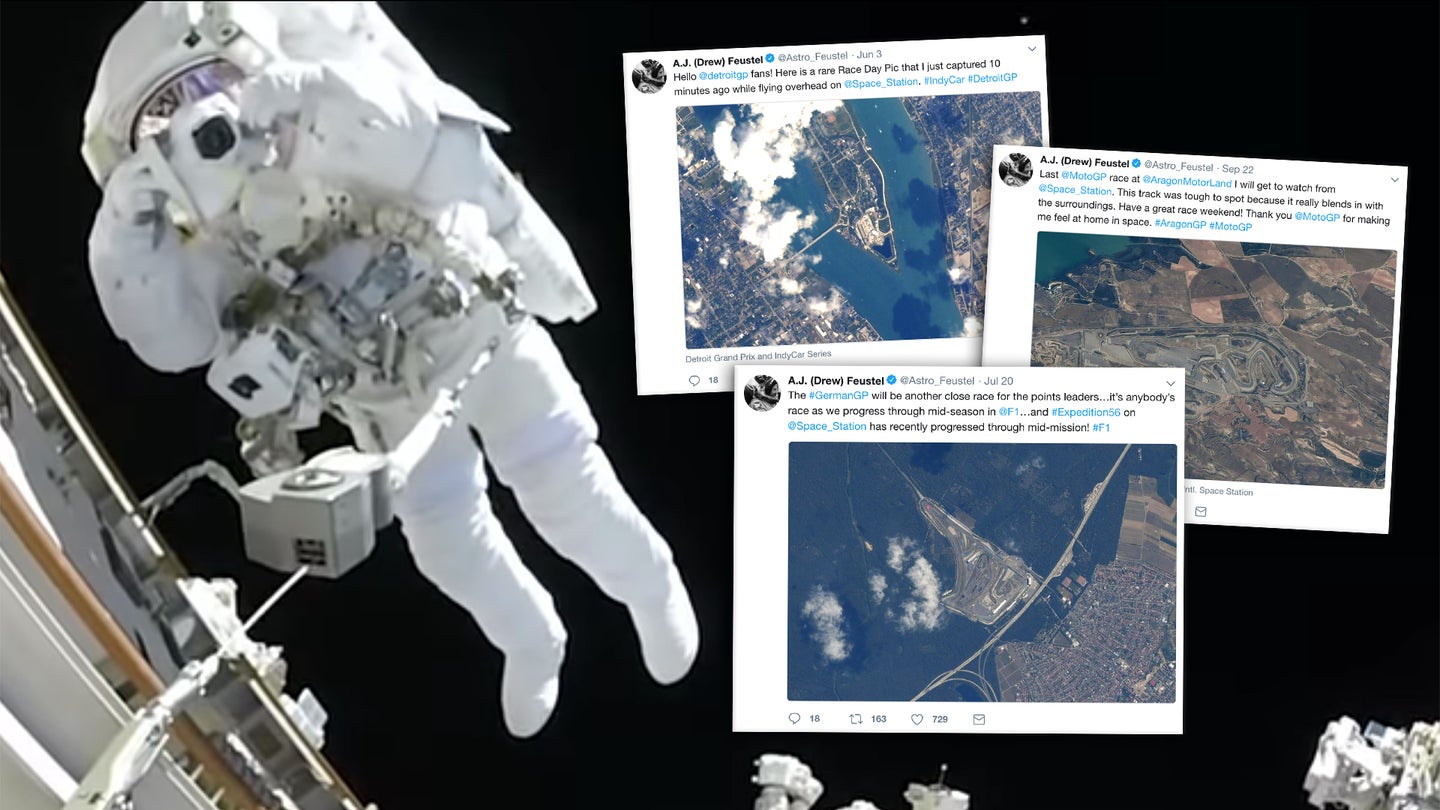 NASA Astronaut and karaoke superstar Drew Feustel returns to Earth on Thursday after spending six months in orbit as Commander of the International Space Station. His time in the heavens was marked by important experiments in physics and biology that aim to help all of humankind—and studiously taking pictures of the world's most famous circuits and tracks from 254 miles up on race day.

Feustel's gotten a lot of attention this week as he celebrated the end of his command by starring in a zero-gravity music video produced on the ISS with the help of Canadian rock band The Tragically Hip. The original song, All Around the World, is a stirring accompaniment to the ethereal sights up there. But a voyage to his Twitter feed shows he's also been busy documenting the 2018 season on high for Formula 1, IndyCar, and MotoGP whenever possible.

It began with a shot of Formula 1's Melbourne Grand Prix in March, which the ISS happened to pass over as the race was starting just five days after Feustel blasted off from Earth in March. You can't make out much detail from 1,341,120 feet up, but it's still kind of incredible to think that a person was seeing the Grand Prix from space while we were all watching from our terrestrial viewpoints. Feustel also dialed up the F1 live stream on his laptop to get the full perspective. This was his second-ever tweet from space, the first simply thanking everyone for following along.

Perhaps this should come as no surprise from someone whose official NASA bio leads its "Experience" section with his work restoring vintage Jaguars—yep, he's one of us, and simultaneously so much more. His career as a high-altitude spotter spanned the globe—IndyCar at Long Beach and Detroit, MotoGP at Silverstone and Misano, Formula 1 at Monaco and Monza. Feustel seemed to relish hitting as many tracks and series as possible in a race weekend. The overlapping coverage is at once funny and a humbling reminder of the grandiosity of spaceflight.

Reality necessitates that some of these pictures were captured a few days before the actual race, and it's not like Feustel was able to hover over a track, kick back, and take in the action with some freeze-dried chili and an electrolyte-boosted beverage. The action might be invisible to the naked eye, but the view is undeniably cool.

Feustel's also been a racer himself. His NASA bio also mentions his karting experience in college, and he referenced one of his less-proud moments behind the wheel in wishing good luck to the drivers at Honda Indy 200 at Mid-Ohio. A peek further back at his timeline reveals he's also got a mid-1980s BMW 535i named the Millennium Falcon that he restored by hand and an old Austin-Healy Sprite that he describes as "smaller than Soyuz capsule."

The world's great racetracks clearly captivated Feustel as he soared above at 17,000 mph; they were by far his most frequent subject on Twitter. We're equally awed that someone in that lofty position would take the time to connect with racing fans around the globe. Welcome home, Commander. Now someone get this man a pit pass.