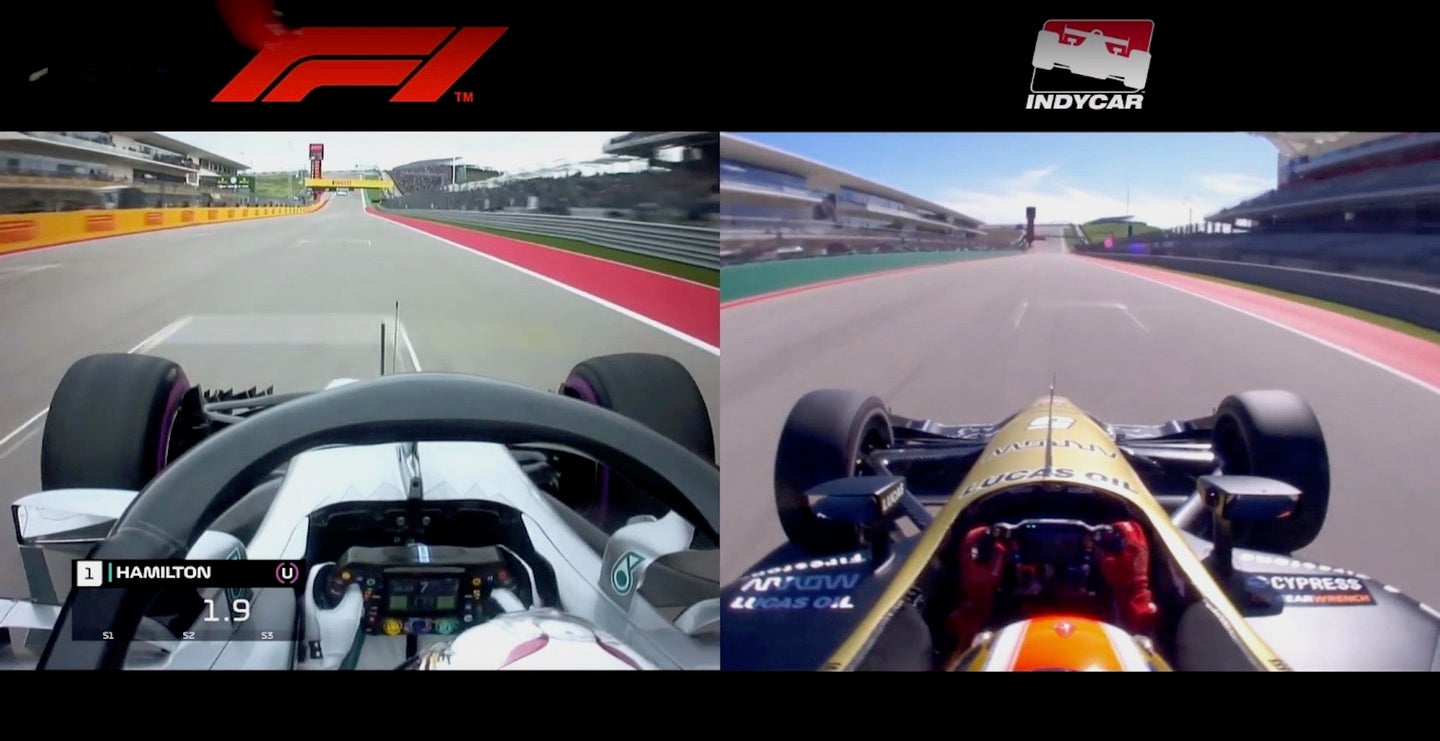 With IndyCar's Spring Training session at the Circuit of The Americas (COTA) in Austin, Texas officially in the books, we can officially compare lap times between a modern-day Indy and Formula 1 race car on the same exact circuit using the same exact track layout. And just as you may have expected, the gap is pretty hefty—as in 14 seconds hefty.

IndyCar rookie Colton Herta was the man with the plan at COTA on Tuesday, setting the fastest lap time of 1:46.62 around the 3.4-mile rollercoaster of a track, besting Team Penske's Will Power by 0.47 seconds, according to Motorsport. And while IndyCar's first outing on the famous Texan circuit (aside from a tire test last October) went without a hitch, it gave us a chance to highlight the enormous performance gap between the two premier open-wheel racing series in the world.

Here's the nitty-gritty: Mercedes-AMG Petronas' Lewis Hamilton has broken COTA's track record a handful of times, but most recently in 2018, when he set a scorching qualifying lap to earn pole position for the United States Grand Prix. That lap time was 1:32.23, so exactly 14.44 seconds faster than Herta's timesheet-topping lap from this week. In case you can't quite visualize what a 14-second gap looks like after one go-around, just think that Hamilton is already crossing the finish line while Herta still has several corners plus the main straight left to go.

There isn't onboard video readily available from Herta's lap, but luckily there is of James Hinchcliffe's. Even better, it's been conveniently paired next to Hamilton's 2018 record-setting lap. As you'll see in this video, Hinchcliffe's lap was considerably slower than Herta's, as the time shown on the screen shows a final gap of 18.4 seconds to Hamilton. For the record, the Canadian's best time on Tuesday was 1:48.41.

While it's great to finally see these lap times to compare and sort of poke fun at, it's worth mentioning that this comparison is absolutely useless. For starters, Indy cars and F1 cars are completely different. Yes, they're both built with the intention of going hella fast around a race track, but these disciplines of speed are totally different—sort of like Taekwondo is different than jiu-jitsu.

Lastly, yesterday's lap times reflect IndyCar drivers' very first encounter with the challenging circuit, meaning that they're just warming up to it, and engineers are only beginning to understand what's required to make a car go fast around COTA. Meanwhile, F1, and Mercedes-AMG Petronas specifically, have had several years and terabytes worth of data to make sure their car is as competitive as can be when it rolls out of the garage come Friday Practice later this year.

It'll be interesting to see what IndyCar's pole-setting time will be at the end of March, and how it compares not to an F1 car, but a Formula 2.