The Completely Insane Cars of Fallout 4

The fantastic fusion cars of Fallout 4 and the 1950s styles that inspired them. 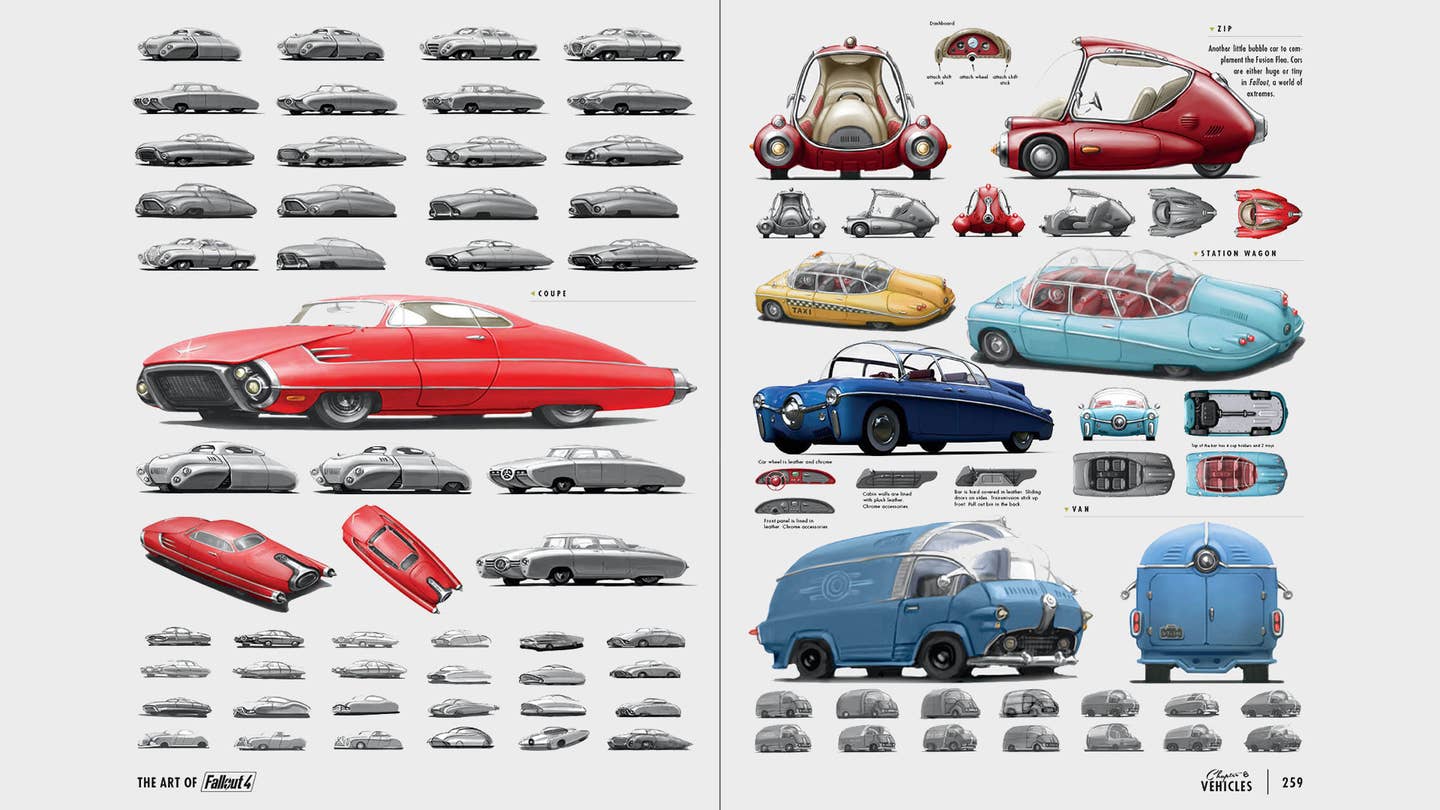 The world of Fallout 4 is bedecked with nuclear-powered vehicles rocking body styles that look like George Jetson had a fever dream of Detroit in 1957. You may only get to know their bombed out shells during your time in the Massachusetts wasteland—it’s called Fallout for a reason—but that doesn’t mean you can’t check out the real-life classics that, undoubtedly, inspired them.

This one is a lock, as evidenced by the fact that Fallout and Xbox partnered up to bring a Pip Boy version of the 50’s workhorse to Forza 6 as a drivable and, more importantly, raceable car. Check out the Forza 6 hub to find out how to get yours onto the Nurburgring.

Corvega
Inspired by a 1958 Plymouth Savoy

It’s sacrilege to even think of a Corvette as a sedan—so we didn’t. The Fallout Corvega shares a side scallop and the first four letters of its name with the Chevy classic but the rest of the body takes all of its cues from the late ’50’s Plymouth. The long body and wall-to-wall chrome grille of the Corvega are certainly indicators of the similarities. And, you know, those gigantic tailfins too.

We almost dismissed the VW Bus as a contender here. Surely a symbol of the 1970s couldn’t be the inspiration behind the van most useful in a 1950’s evil conspiracy to turn humans into lab rats. Then we realized the damn thing hadn’t changed since the ’50’s and German efficiency would be really useful in an underground organization. Finally, we looked at the flat snoot and chrome bezels. Game over.

We could only imagine that children trapped in the 1955 Nomad’s back seat during road trip sing-alongs might have had a lot more fun knowing they were sitting on top of a nuclear reactor like in the Fallout family truckster. Swap the Nomad’s signature white roof for a completely glass one and you’ll have a sci-fi doppelganger.

The Zip
Inspired by a 1959 Alfa Romeo Giuletta

Lots of cars could claim the round fenders, circle headlights and body-side moldings of this era but, in terms of the small size and bubbled cabin of Fallout’s Zip, we have to look across the Atlantic to a continent that has valued economy size cars for decades. Alfa Romeo’s Giuletta encapsulates the sleek lines of The Zip better than a Mini-Cooper and nails that “might be a submarine” look better too.

Roof is literally a bubble. Check. Points coming out of the nose. Check. Big-ass fins. You know it. But looks aren’t the only thing tying the Chryslus Rocket to the Harley Earl’s final, mythical Caddy concept. There’s also the fact that we’d love to drive both and it would take a miracle for that to ever happen. We’ll gladly take the Rocket for a spin on Forza 6’s tracks later this year as it’s the other car in the cross-promotion between Fallout and Forza and, according to Xbox, will be available soon.

The Fusion Flea
Inspired by the 1953 BMW Isetta

The Isetta’s single door design is really the closest thing we could find to the tiny hatch and three-wheel layout of Fallout’s Fusion Flea. The Isetta was the most successful micro-cars ever produced and was actually called a “bubble car” in its time so there’s no wonder some of its stylings were lifted for the set dressing in Fallout.