The Insane, Post-Apocalyptic Cars and Trucks of Wasteland Weekend 2019

Just because the world is ending doesn't mean car culture will.

Every September, the apocalypse descends on a stretch of barren scrubland in Southern California. It's out there, deep in the Mojave, that visions of a future stitched from the ruins of the present become real. After the bombs fall, or the water dries up, or some other disaster knocks modern society off its tightrope, what's left might look a bit like Wasteland Weekend—or at least, that's the small hope of thousands of people who flock to this outlandish desert festival year after year.

Now in its tenth year, Wasteland Weekend is a full-immersion, post-apocalyptic gathering with strong Mad Max-meets-Fallout vibes, centered around a sprawling temporary city of corrugated metal and rusted steel with all the necessary services: Bars. Bartering areas for junkyard commerce. A Thunderdome for live combat. Performance stages. A casino. You know, the basics for human survival post-collapse. Attendees arrive for the long weekend in full ragtag dress, and increasingly, they roll up in an assortment of truly outlandish vehicles looking like lost extras from Mad Max: Fury Road.

Some of the cars at Wasteland Weekend, 2019.
Brett Tingley / The Drive

The dark future worlds of fiction feature cars and trucks—if some can still be called that—welded from whatever junk can be found out there on the irradiated plains, and Wasteland Weekend is no different. Dozens of heavily armored trucks, off-road muscle cars, rusted-out motorcycles, and uncategorizable behemoths can be found out there, the popularity of which (and the builders' sheer enthusiasm) saw the rise of an on-location car show and another, more accessible offshoot in Los Angeles in the spring.

"Amateurs and pros alike spend months and years tinkering in their garages to create Mad Max-style fantasy vehicles that they drive from as far as Northern Canada to come show off," says Wasteland Weekend event director Jared Butler. "There's nothing quite like showing off your custom creation in a post-apocalyptic city, populated by thousands of fully-costumed attendees among fully-themed movie-set-style structures, not to mention the beautiful Mojave Desert backdrop."

Couldn't make it to the Mojave this year? We've got you covered. Here's a sampling of the best cars the worst-case future has to offer, along with a firsthand description from the builders themselves.

"The chassis is a 1975 short bed 4x4 with a ‘68 El Camino on top. Under the hood is a 495 LS3 GM crate motor with EFI. Transmission is a TH400, and both axles and driveshafts were rebuilt. The Hel Camino is designed to look like Mad Max on top but is very reliable to be driven daily. No A/C or heater, but the adrenaline keeps me comfortable.

"Believe it or not, this is my daily driver on the streets of Las Vegas. It gets a lot of attention at stoplights." 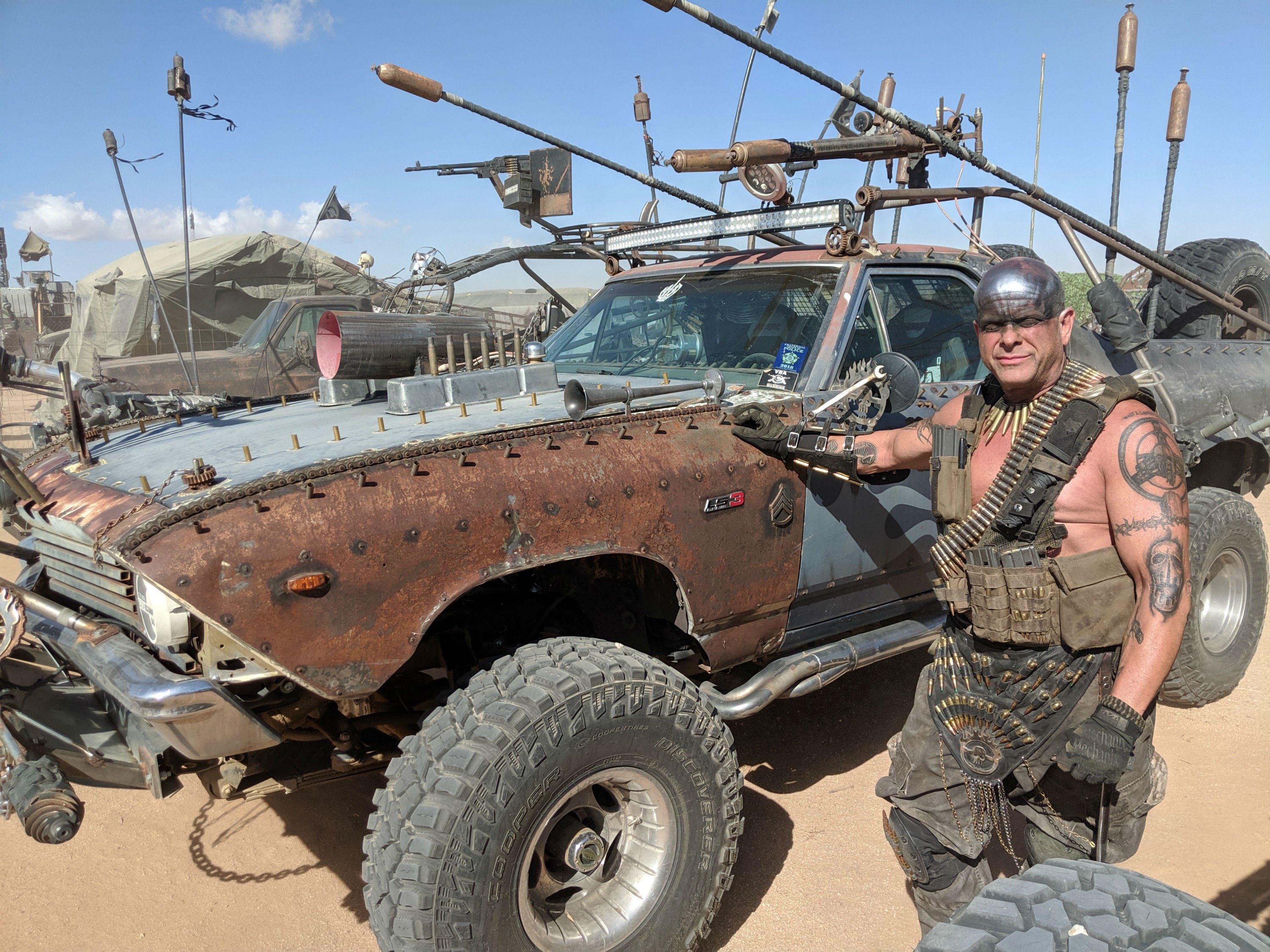 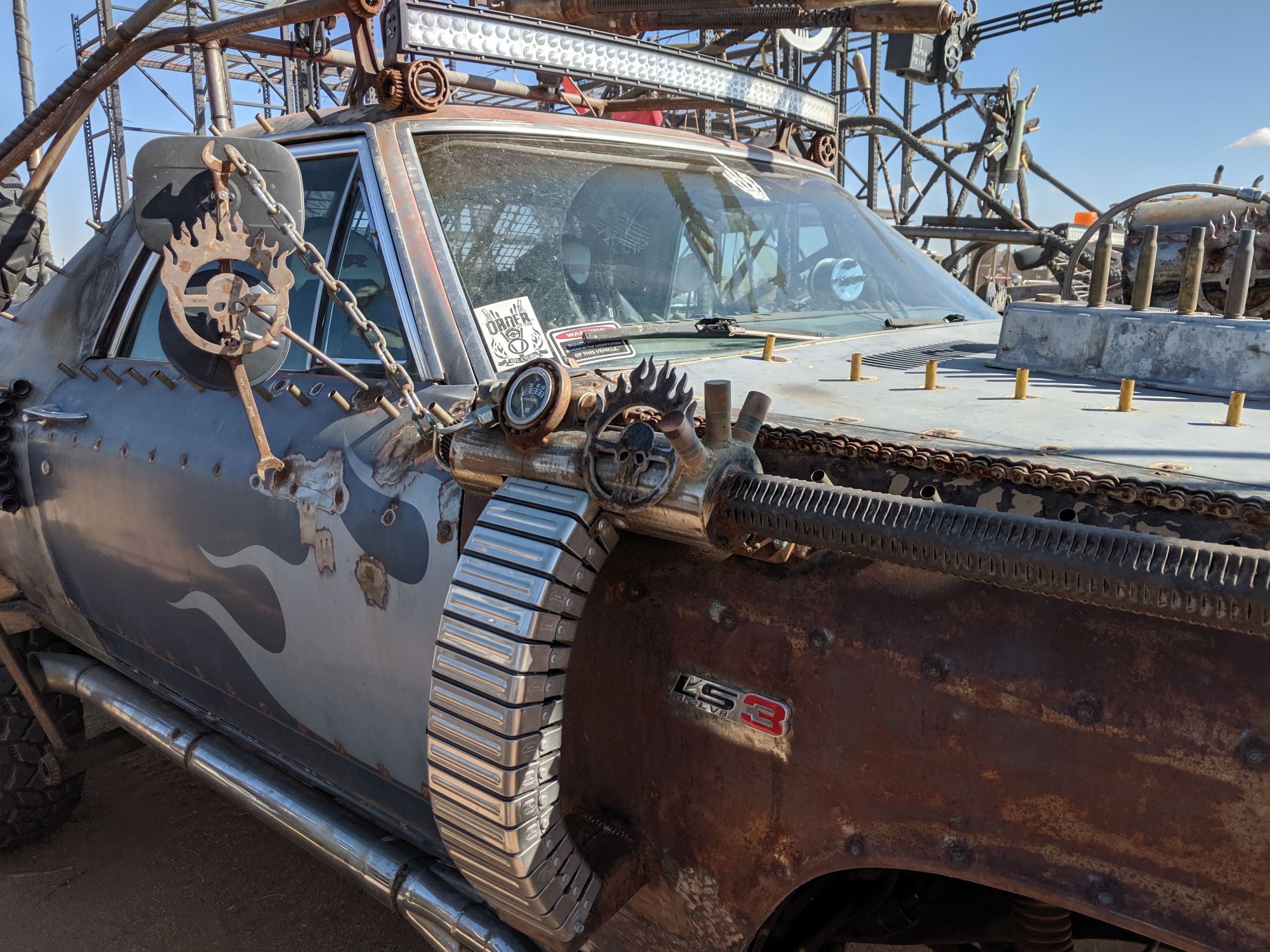 “We think it was a 1990s Suburban with an engine out of a late-70s or early-80s Suburban, with the transmission out of the second Suburban. Under the hood there's a 454 Big Block with a turbo 400 behind it and a whole lot of cam that it doesn’t really need but it sounds really cool. It’s got 2 radiators to keep the heat down in the desert.

We played some reindeer games with the suspension. Flipped some control arms from a 1-ton to get the extra clearance, added cross leaf suspension in the front to get more lift and then permanently pre-loaded the overloads in the back to keep the ass end of the ground.

We’re not supposed to make it street legal, it’s more of a parade vehicle. It features a functioning flamethrower on the back and a nail gun on the side. You can find it at post-apocalyptic events at Uranium Springs.” 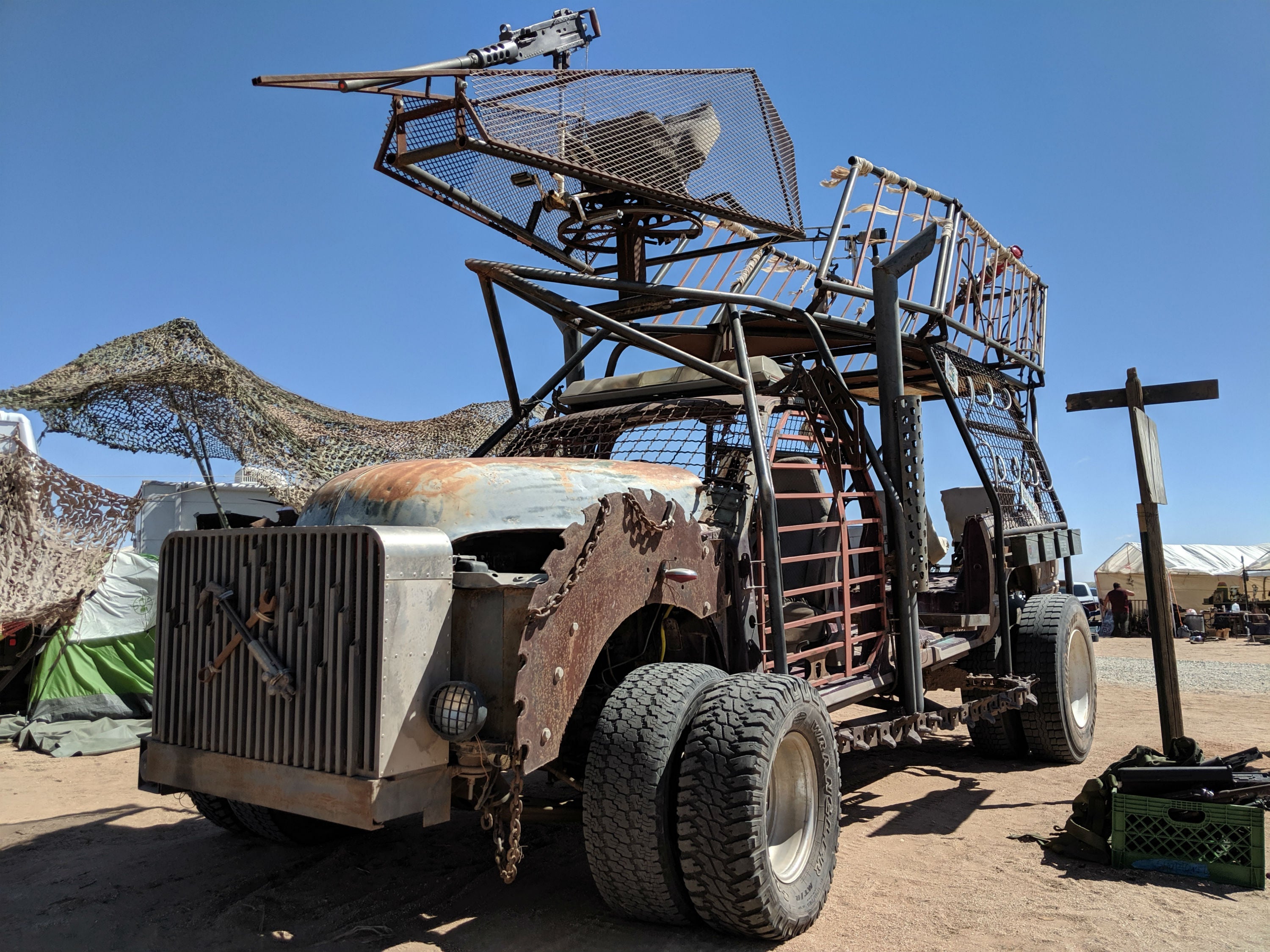 “I found it on OfferUp. It was in a house that burned down around a meth lab. When I got it, it was nearly gutted, but I did find two crack pipes in the interior.

The Rocket Launcher originally had a 351 Cleveland under the hood. It now has a 400M with a blower build, nearly rebuilt in order to handle the bigger cam. 671 with two 650 double pumper with the boat scoop intake.

It sits on 4-inch lift blocks running 31x10s in the rear and 235x7515 Goodyear Wranglers in the front which I had to trim because I was getting turning issues with 20 people hanging on the roof shooting the flamethrower.

The front features the Meat Plow: five-eighths-inch steel plate, cut up and attached with custom fabricated mounts that can mount to any factory Ford Torino. The Meat Plow also includes a PA system to yell at people.

The interior door panels were donated by local municipalities. The start/run box was the oxygen system from a 727 with custom electrical panel from a boat, old Jeep gauges and start buttons from a MIG fighter jet that hide the start pattern and flamethrower pattern. Most of the parts were scavenged from junkyards”. 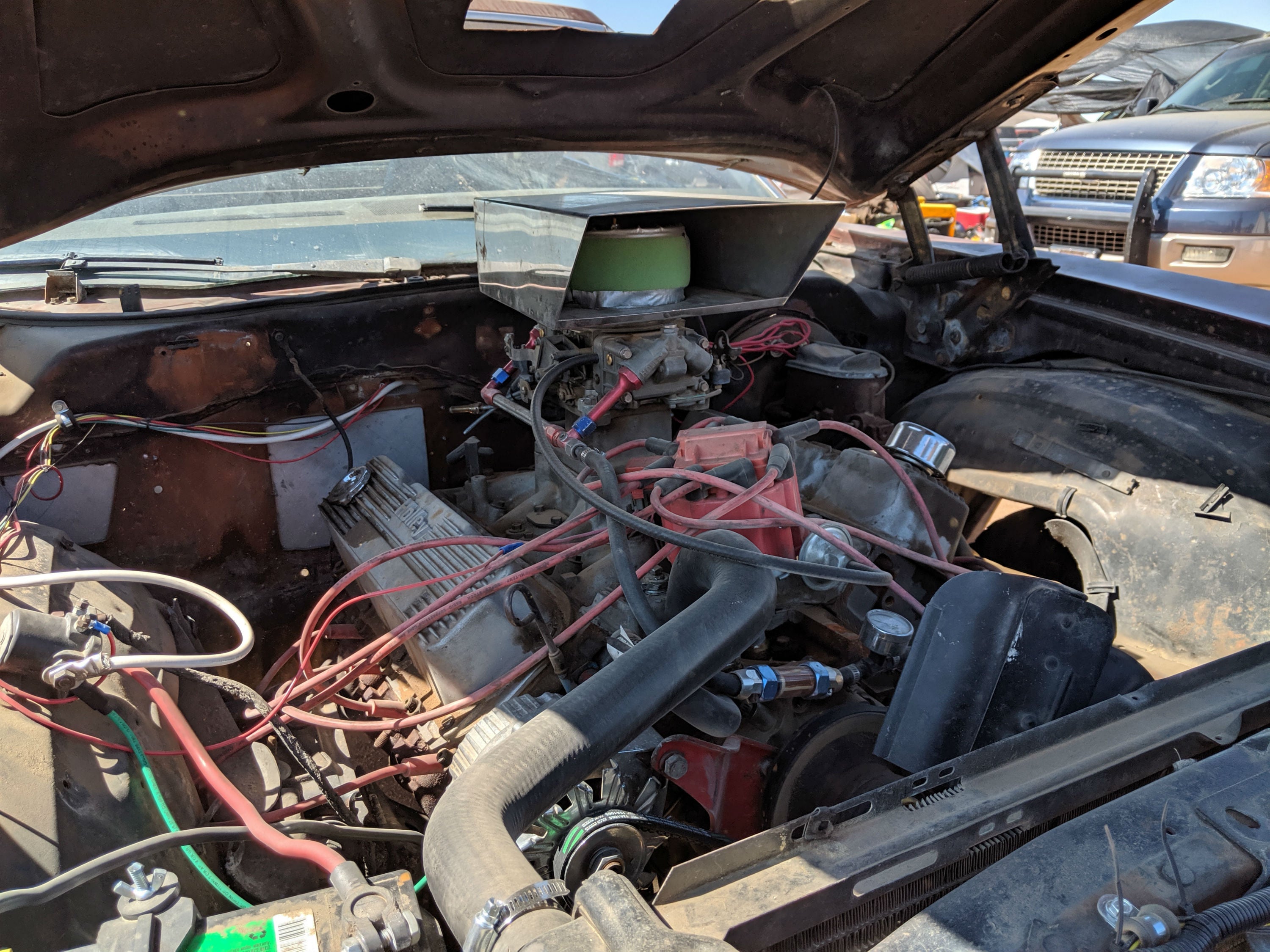 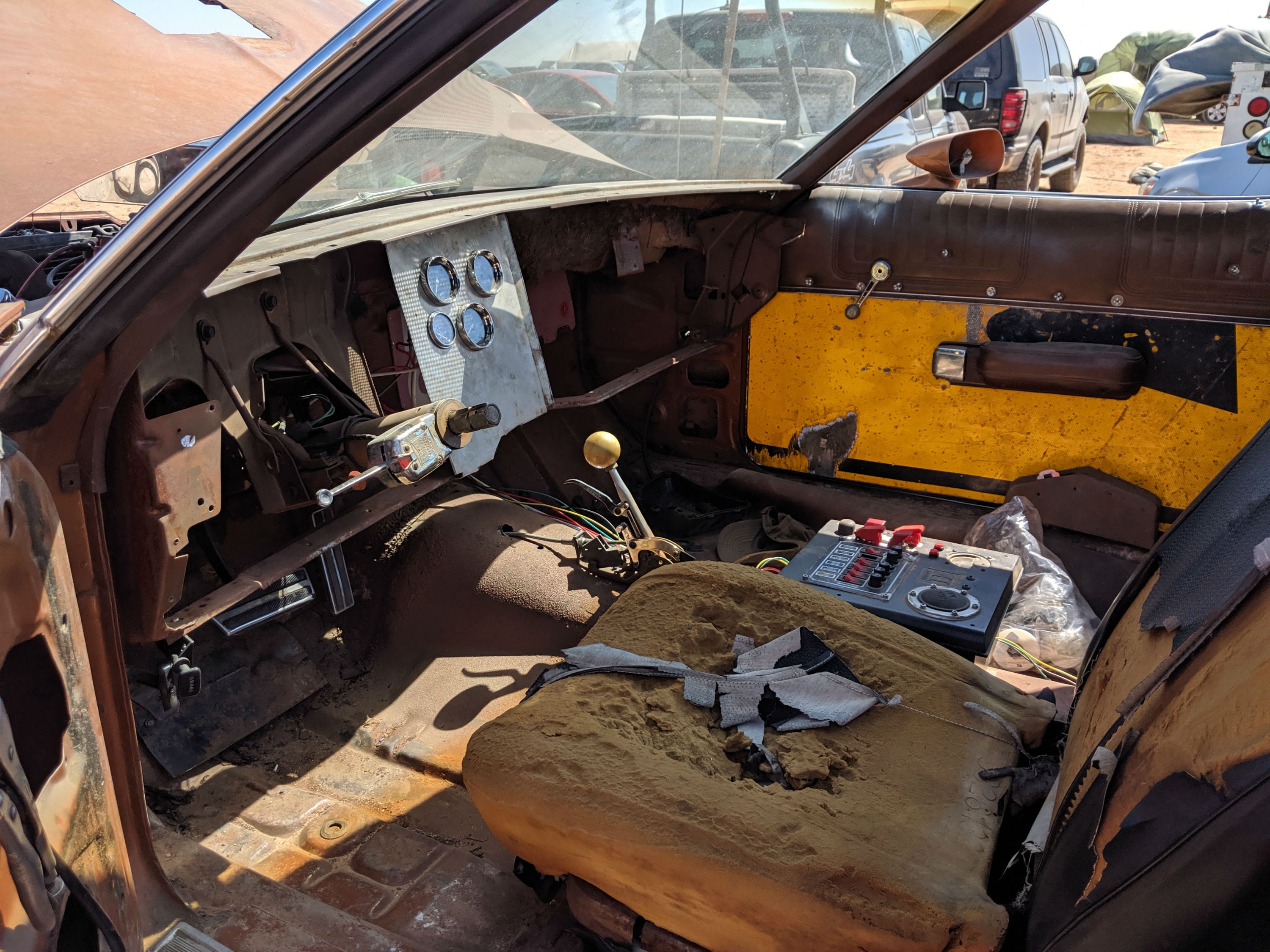 “Before we got the truck, it had been converted to a mobile tattoo and piercing van by adding a box from some other old truck. It was disgusting. All kinds of weird stuff had been done to it. We took the box off and moved the rear axle forward.

The cab was too small, so we added the Nash to the top. It seats four people now with plenty of room. Drivetrain is all stock. As far as we know this is the only truck that can pull a 48’ trailer by gooseneck. We had to custom fabricate it ourselves in Solidworks.” 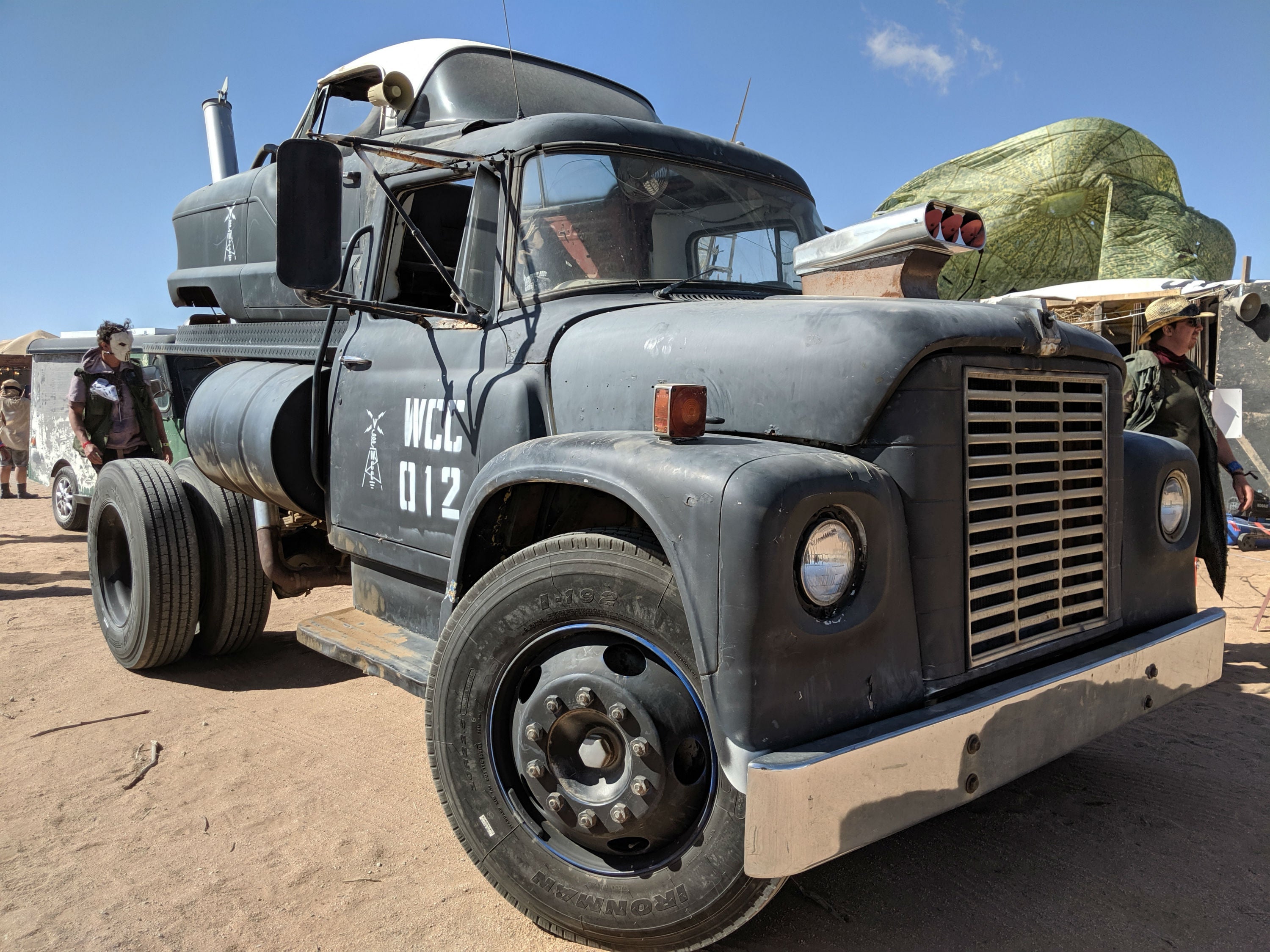 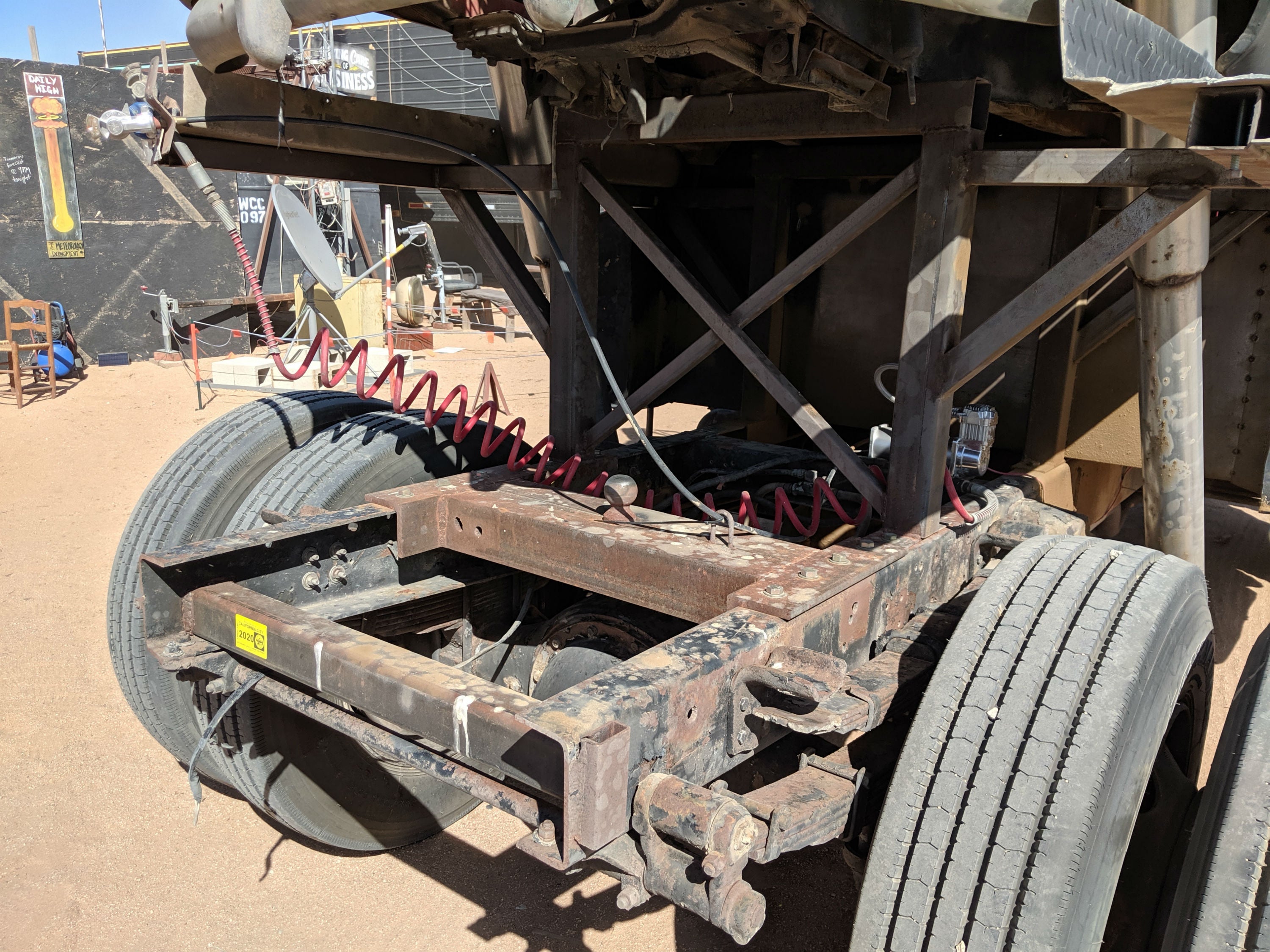 “The car came with power windows and A/C, but they were all ripped out. It’s kind of a race car now. I lowered it in the back to give it that racing vibe. It’s got steamrollers on it, a little bigger than they should be. I took out the rear window so my boys could sit in the back with the rocket launcher.

The motor is stock for the most part, just dressed a little bit with the intake. 400 Big Block V8, Edelbrock 850 CFM carburetor, lopey cams, 727 TorqueFlite automatic transmission. Puts out around 400 HP. This was my first car, got it when was 17. I rebuilt the engine and started modifying it before I heard about Wasteland Weekend.” 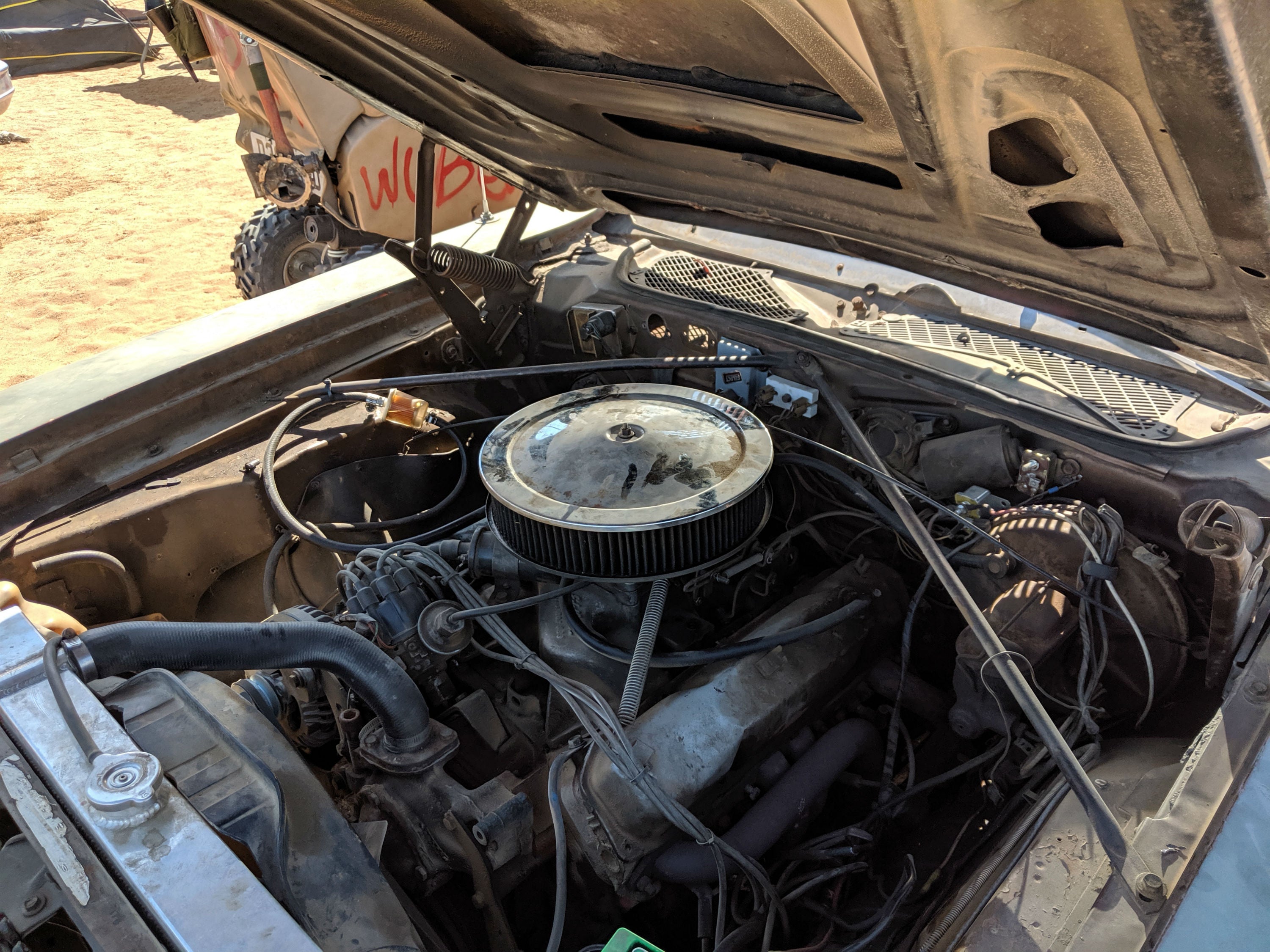 “I built the car in 2012. I found it on Craigslist from a guy who bought it intending to fix it up but never did. It came with a ton of extra parts for $600, which I sold and canceled out the cost.

When I got it, it was completely gutted—no engine, seized up transmission, no interior, no glass, no wiring. I had to reanimate its corpse, hence the name. That let me do whatever I wanted to it. I started with the sawzall and cut the front and back off. I wanted to do avoid the Baja bug look I see at all the car shows and do something a little different.

I made the Mad Max-inspired steering wheel on my lunch break one day when the old wheel broke on the way to work. It’s got all digital gauges, 33x12.5 rear tires on stock suspension, and a flamethrower on top. The drivetrain is totally stock so that finding replacement parts won’t be a problem.”

I use it for moving stuff around while setting up and breaking down Wasteland Weekend and to occasionally pull people out of the mud.”

“It’s basically a 50cc motor with a surfboard on top. The whole thing was a motorized skateboard kit that I added the board to with some rubber on top for traction.”

“I found it in a field in Tennessee. It’s used to deliver mail around Wasteland Weekend for the Wasteland Communication Corporation.

The Kubvan was made as a postal van prototype in ‘84. Grumman built hundreds of prototypes to bid on a federal contract for new postal vans, and this model was the runner-up. Each one had slightly different features and configurations. Supposedly, they didn’t get the contract because the federal government didn’t want a German engine in their postal service vans. It's thought there are only about 100 left in circulation.

This one originally had an ‘84 Diesel Rabbit engine with great gas mileage and about 54 horsepower. I replaced the suspension, engine and transmission with those from a Mk IV TI Rabbit I bought without a scratch on it. I had no idea what I was doing, and just went it at with a sawzall to make the Kubvan body fit. I don’t know much about cars other than this specific engine, which I rebuilt myself. The purist collectors would be pissed if they knew what I did.”

"This is one of only about ten V8 Rails in the country. I built it myself for the desert and the sand dunes, not necessarily just Wasteland.

It features a big block crate motor and all flush touch sealed controls hooked up to an ARC controller, fully customizable. It hauls ass and handles really nice." 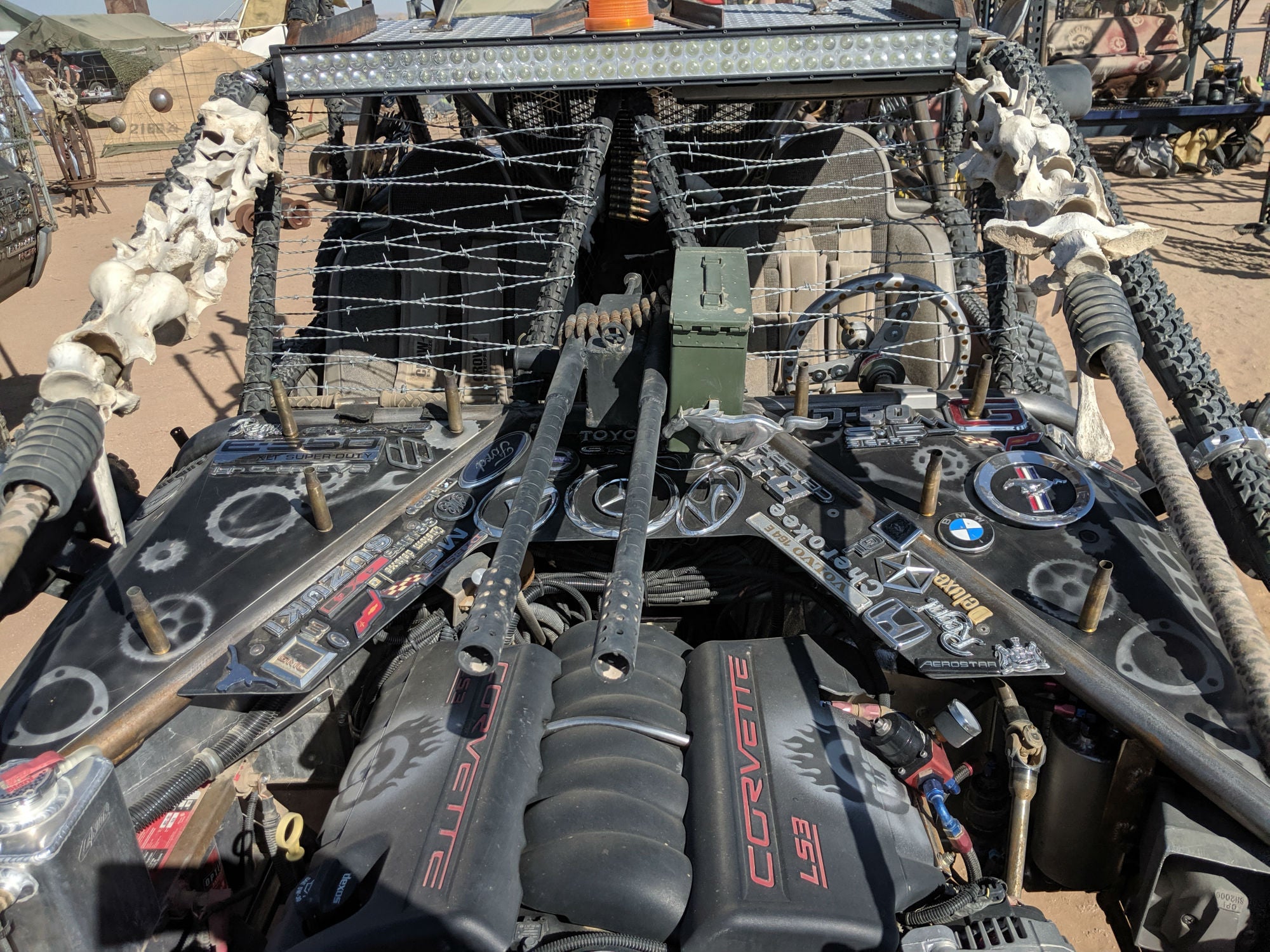