If the Toyota Supra is a modern classic, it's time we start really treating it like one. 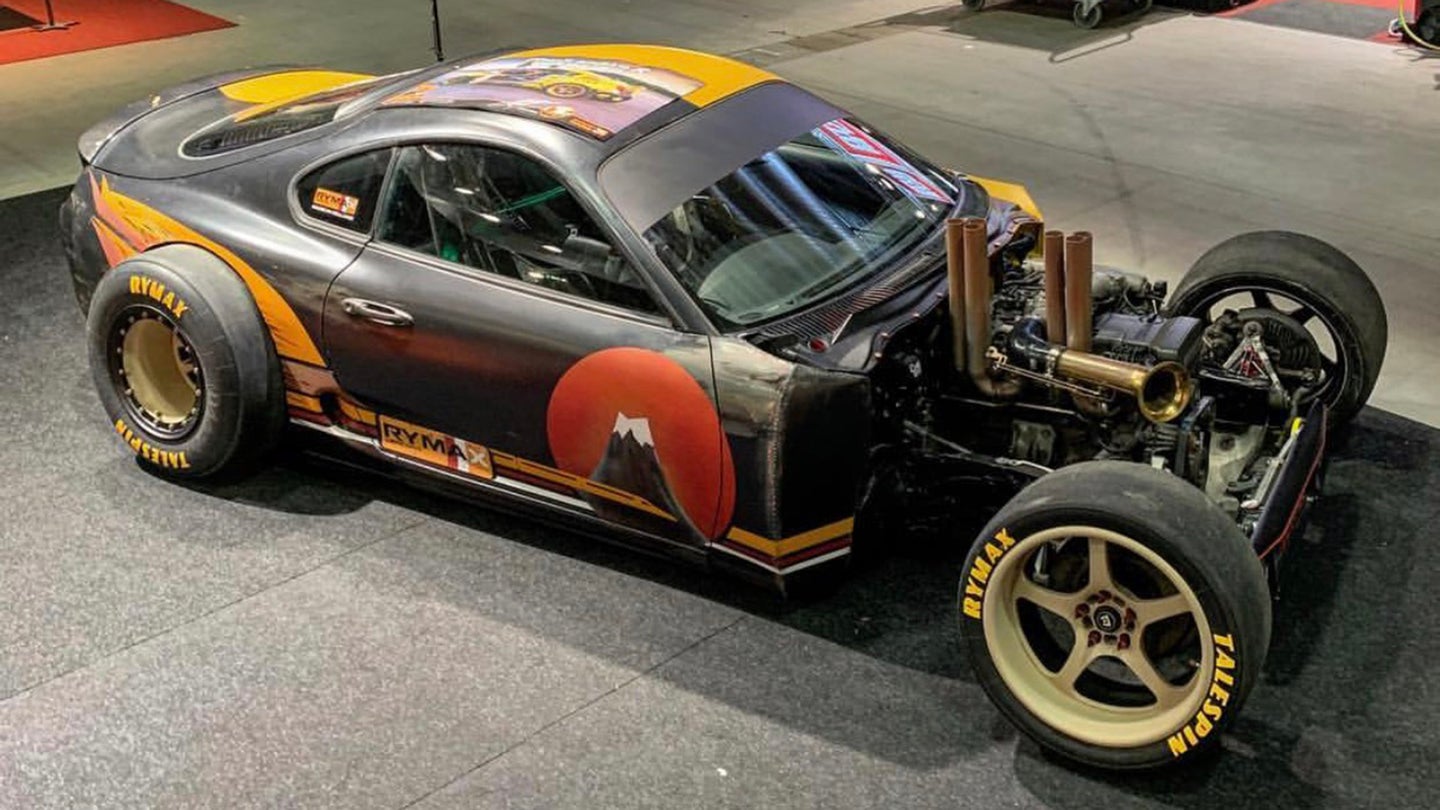 In case you missed the brightly-colored, splash-graphic memo, cars from the not-so-distant 1990s are now being treated (and priced) like the collectible classics they've become. That's why it's such a brilliant shock to see a scared cow like the MK4 Toyota Supra slaughtered on the altar of drift and turned into a modern rat rod. But just like the vintage one-offs that inspired Talespin, as former Formula Drift world champion Fredric Aasbø has christened his creation, this project isn't here for your feelings. It's here to party.

Aasbø pulled the covers off Talespin at the Oslo Motor Show this weekend, and honestly it's a refreshing change to see a mid-Nineties Supra that hasn't been preserved in a bubble for 20 years or converted into a 1,000-horsepower drag car. In fact, the build started out with a "sorry-looking donor Supra" that gave its front end panels up in service of another project, leaving the cabin and rear to serve as the base for Aasbø's vision.

Starting from the front—how can you not?—the car is still powered by the stock 2JZ-GE inline-six engine, though Aasbø writes on Instagram that he's got several working ideas for a different powertrain. The 2JZ-GE isn't as legendary as its turbocharged sibling, making 220 naturally-aspirated horsepower and 210 pound-feet of torque, but we have to imagine those numbers are a bit higher after all the other work that's been done.

The engine reportedly still rests on the factory subframe, with a second one grafted to the front in order to extend the wheelbase for that perfect hot rod look. That can't-miss-it front end also rocks an open-wheel Formula SAE suspension setup courtesy of RS-R and a custom grille sourced from a Toyota FJ Land Cruiser.

The contrast between the exposed mechanicals up front and the mostly-untouched Supra body out back is truly striking, especially with those gigantic Nascar Cup slicks poking out of the rear fenders. The Talespin name (and livery) comes from a popular Disney cartoon in the early 1990s featuring Baloo from The Jungle Book as a cargo pilot, but it's also a nod to Aasbø's chosen profession—and the fact that this particular rat rod was designed to be driven, or even looped a few times.

(Just a note about the term "rat rod" here: the phrase traditionally applies to hot rod builds that are purposefully, well, ratty. We're using it here because even though Talespin is nice and shiny for its auto show debut, it remains a car that was made to send up the self-serious vibe that more precious custom Supras can give off these days. It was also made to be driven.)

"Many of you have asked what the purpose of 'Talespin' is. It’s quite simple: Cruise around and eat ice cream—and perhaps throw a donut or two!" he wrote on Instagram.

Assuming nothing was lost in translation there, Aasbø's point is that Talespin exists because it can. Taste is subjective, and there are probably plenty of people looking at this and mourning the destruction of a perfectly-good Supra. Even in a "sorry" state with the base engine, these cars are wildly collectible today. There's no turning the clock back on this build. But it's also incredibly fitting considering the spirit of the original rat rods.

And more specifically, Aasbø said his special Supra represents a dream build he's held onto for a decade. Whether or not you're on board with the style, that's an eminently-relatable headspace for a lot of enthusiasts.

"This vehicle is the result of a dream that was born on a late night more than ten years ago," he proclaimed. "It’s been a source of inspiration in tough times, knowing that some of my best friends and I would one day build something this rough and FUN."