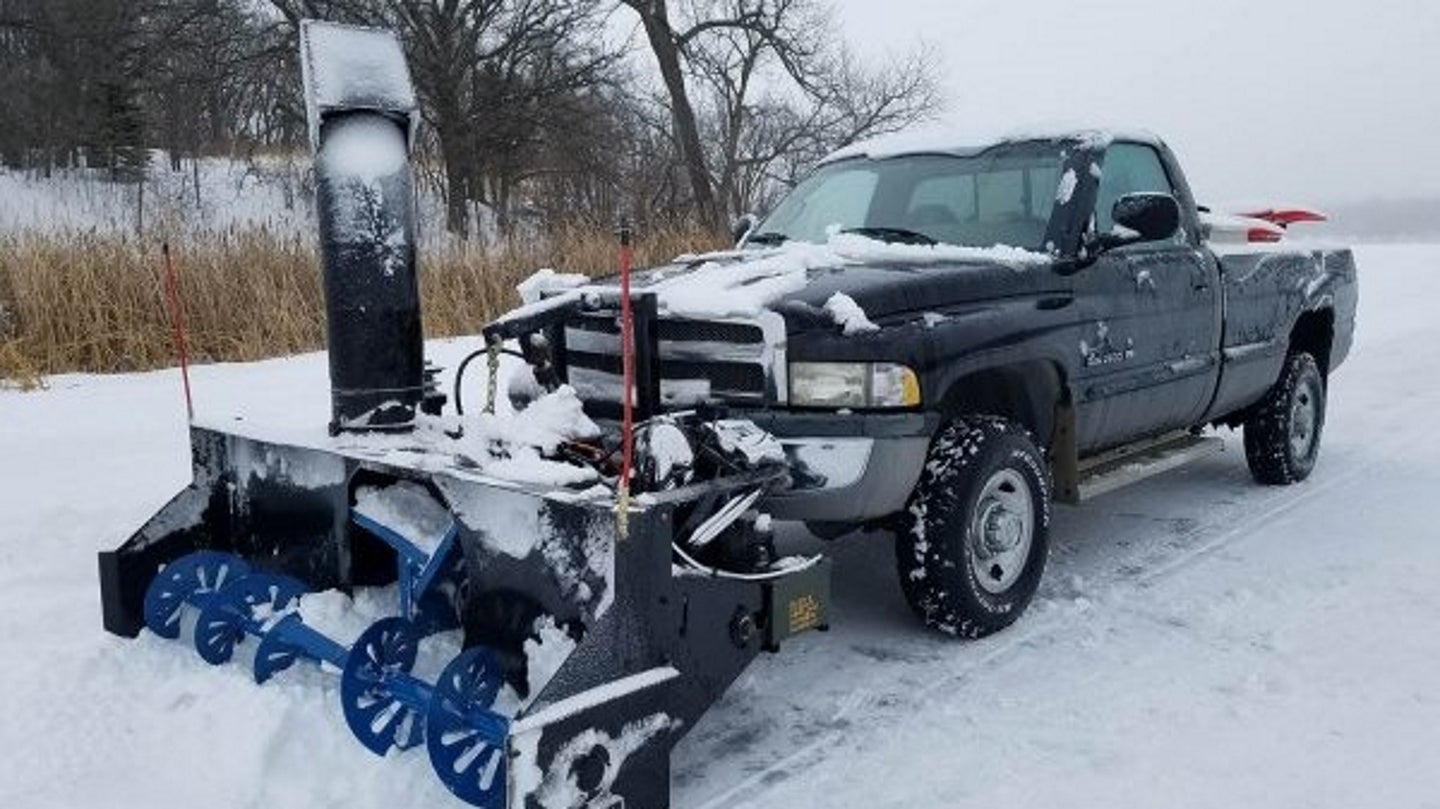 A wimpy little single-cylinder snowblower might be good enough for your measly little driveway, but when you want to get serious about snow removal, call the madmen at the Sisufab motorcycle shop in West Fargo, North Dakota. These guys felt like taking their dirt bikes out on a frozen lake, but there was just one problem; there was too much snow covering the local watering hole. So, they did what any self-respecting Midwesterner would do and restored an old snowblower using a Harley-Davidson V-twin and slapped it on the front of an old Dodge Ram.

Many questions might be rushing to your mind upon seeing this beauty and we’ll do what we can to answer them. It all started with an old Mckee 720 seven-foot, two-stage snowblower originally designed to be mounted to a tractor. It wasn’t pretty when the guys at Sisufab picked it up, but they certainly gave it a new lease on life.

The top auger of the snowblower was ditched in the name of weight savings and some new bearings as well as a fresh coat of paint made it like new again. They needed a donor engine for this old unit and went with an Evo V-twin from a 2010 Harley-Davidson Sportster XL1200 that was involved in a fire. All it took to get the engine running again was replacing a few parts that were damaged by the blaze.

Once it was all put together, they needed something to push their hot rod snowblower. They went with a rather humble farm truck; a 1999 Dodge Ram 2500 4x4 single cab. Perhaps the coolest thing about the whole setup is the RC system that allows you to control the throttle, clutch, and chute of the snowblower from inside the truck.

Harley-Davidson keeps horsepower figures a secret, but the Evo 1200 engine is often estimated to make somewhere between 60-70 hp. For reference, the snowblower in your garage probably makes less than 10 hp, proving this as a pretty strong improvement over the typical Briggs and Stratton or Honda power unit.

While this may be a case of overengineering for a problem that many wouldn't consider an issue in the first place, we're all on board for a bit of redneck tomfoolery.

If you’re going to drive on the highway with a snow-covered windshield and attempt to use a large brush to solve that problem, prepare to be filmed.

How Not to Die Shoveling out Your Driveway

Thousands are injured and as many as 100 Americans die each year clearing snow.