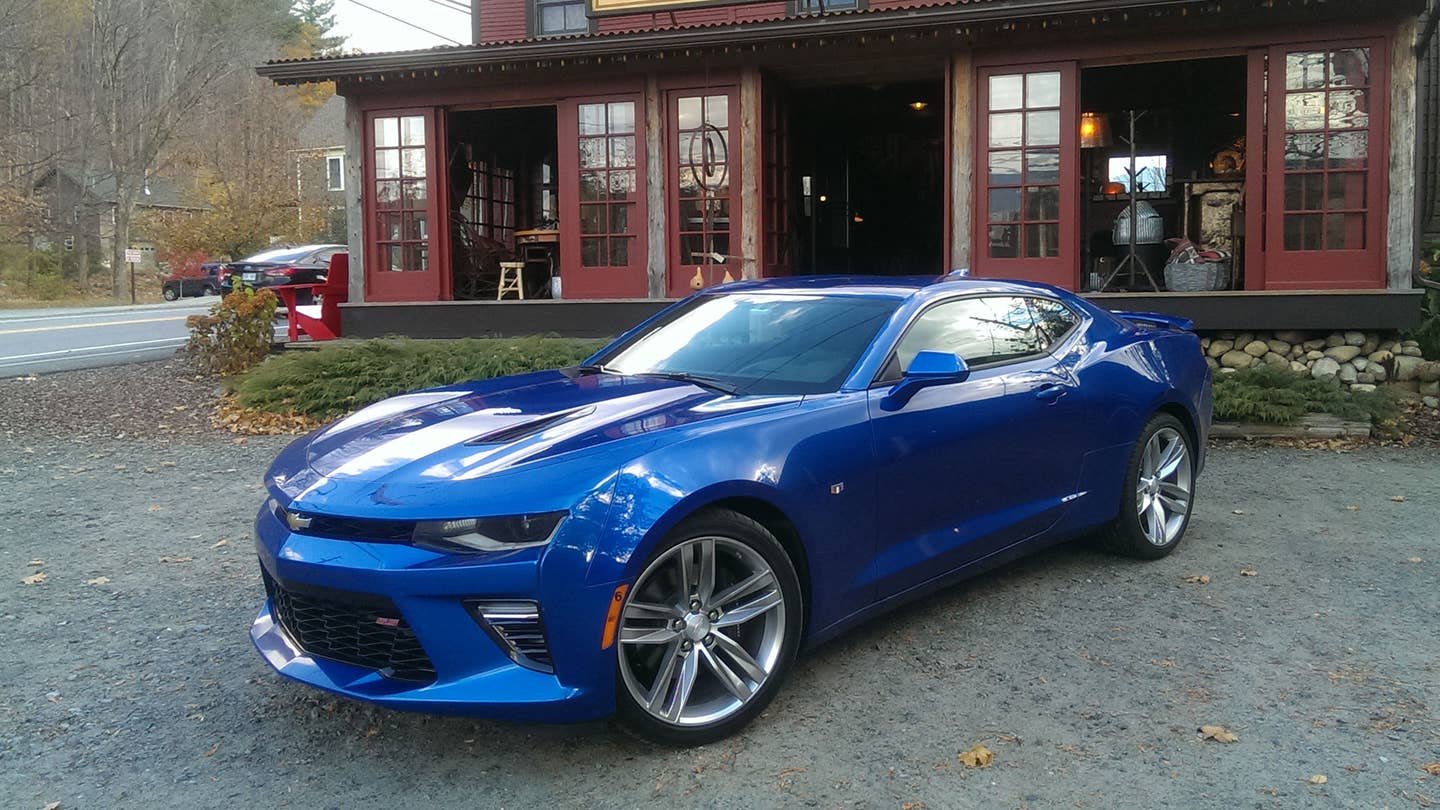 A Camaro, powered by a Corvette Stingray V8 and built on the brilliant Cadillac ATS/CTS chassis, would seem almost impossible to screw up. But if anything, the 2016 Camaro SS I drove for more than 500 miles in and around the Adirondacks this week exceeded expectations.

Thanks in part to its Corvette-Cadillac sugar daddies, the standard-issue Camaro becomes the pony you’d love for Christmas: decisively lighter, more handsome and in perfect tune with its pilot. Now, the Mustang GT is a fine ride, but it’s hard to see how it will handle this Camaro. The Chevy’s tactile steering is superior to the Mustang’s slow, numb rack, the chassis feels even more sophisticated and power is no contest. With 455 horsepower and 455 pound-feet of torque from its 6.2-liter V8, the Chevy has 20 horses, 55 lb-ft and 1.2 liters of displacement on the Ford; and in automatic guise, it’s got eight speeds to the Mustang’s six.

Chevy cites a stoplight-to-60 romp in 4 seconds flat with the automatic version and a 12.3-second quarter mile, both about a half-second quicker than the ‘Stang. I drove the six-speed manual version, which is 0.3 second slower to 60, but roughly three times more fun to drive.

A crowded-garage week also put me the Honda Civic, whose stem-to-stern redesign is drawing deserved raves; and an all-new Nissan Titan pickup powered by a Cummins diesel. If only there were some stumps in Brooklyn that needed yanking.—Lawrence Ulrich, chief auto critic

More like what the Drive is "driving." This is the Land Rover BAR AC45 America's Cup race boat. It is made of carbon fiber, travels three times the speed of the wind and floats above the water like a weapons-grade angel. I sat on the transom netting like an idiot while Sir Ben Ainslie and his crew muscled it around Bermuda's Great Sound at 35 knots. We placed third, and while the crew didn't blame me for not winning the race, I suspect that was the case. Read more here. —Mike Guy, editor

Do you want to get respect on the streets of my hometown, Detroit? Pull up anywhere in a Red Obsession Tintcoat Cadillac ATS-V. People run out of abandoned downtown warehouses to shake your hand. People run out of high-end renovated Indian Village apartment towers to shake your hand. Even my 94-year-old grandmother, an erstwhile Cadillac devotee who abandoned the flock for Lexus, approved. "I just love that car." You think the Corvette our local hero? A Corvette is assembled in the Deep South, bitch. This beast is built in our state capital. Don't make the mitten slap you.

Can it sideways? I'm not the sideways type. But can it overtake a merging tractor trailer on eastbound I-94, dance around a supercharged Bonneville SSEi (!) accelerating in the middle lane, round the 696 mixing bowl at full lean, sploosh down the chute at Telegraph and make the run from Ann Arbor to my brother's house in the ‘burbs in under 30 minutes, in time to kiss my infant niece before her bedtime? Fuck yes.—Brett Berk, writer-at-large

Our intrepid west coast editor, Chris Cantle, is on a Harley-Davidson. A big ol’ Street Glide, motoring from Spain across North Africa. Two weeks. Thousands of miles. Man and machine, exposed to the elements, traversing some of the world’s prettiest and oldest and wildest places. He sends us periodic updates from the road. Read more here.

I get it.—Jonathan Schultz, deputy editor