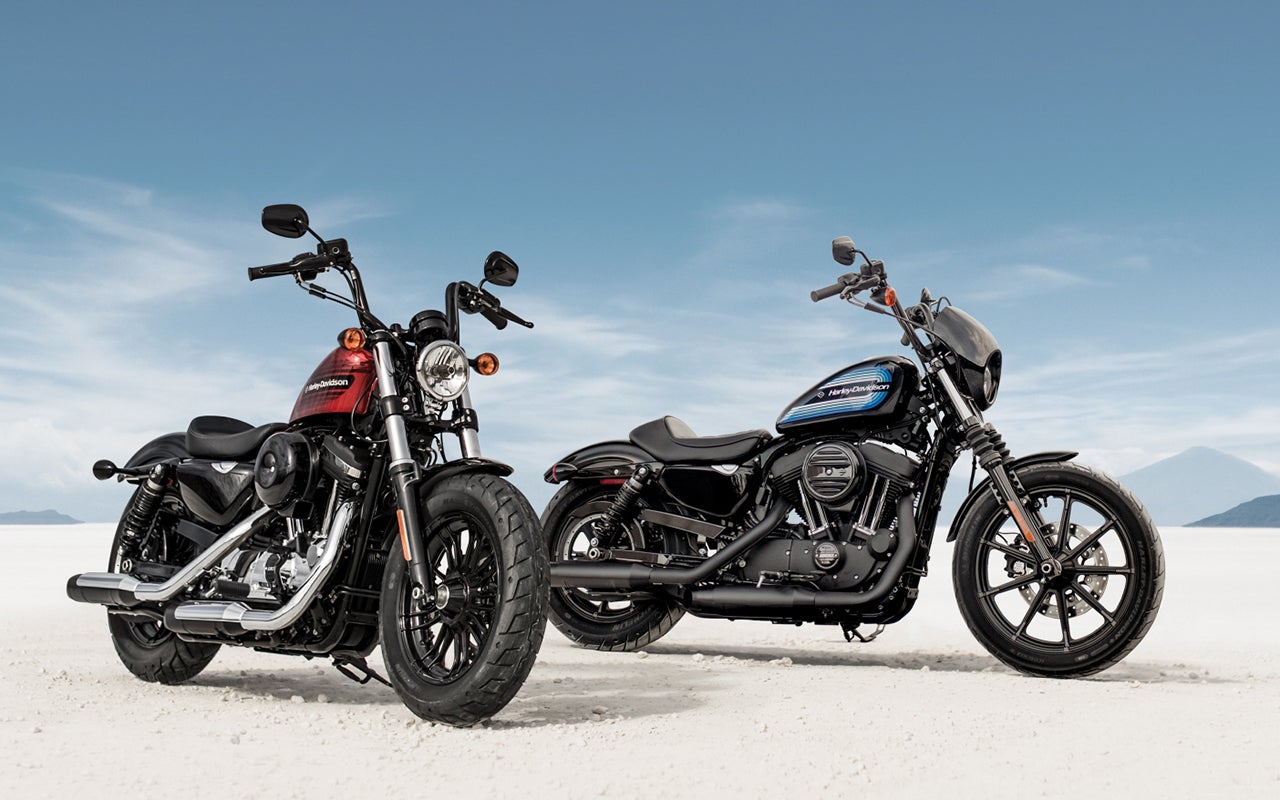 A garage-built custom…from the factory. Harley-Davidson introduced two new Sportster models to add to its goal of 100 models in 10 years, for a 2027 celebration. These two new, high-bar Sportsters have “throw-back styling trends from the custom-bike scene,” according to Harley-Davidson. That marketing line has a scent reminiscent of the old days and reminds me of the start of the FX line, which was said to be a factory-built custom. The two models are claimed to be new, but not really.

“Since its inception, the Sportster has offered the perfect combination of size, power and character that makes it appealing to so many different riders,” said Harley-Davidson V.P. of Styling & Design, Brad Richards.

Both bikes feature the same basic goodies as the rest of the Sportster line, the 1202cc Evolution 1200 V-Twin engine with a claimed 73 pound-feet of torque (Harley-Davidson doesn’t release horsepower numbers). They both sit on the traditional narrow chassis and twin-shock rear swing arm suspension. Both bikes feature nine-spoke cast wheels.

The Iron 1200 features satin-black Mini Apes handlebars (8.75-inch rise, 32-inch spread and 6.5-inch pullback), a gloss black headlight “speed screen” fairing and a Cafe Solo seat. The paint scheme is a multi-color striped that wraps around the tank, it reminds me of the AMF paint schemes of the ‘70s. The Iron 1200 is mostly blacked out, with a gloss-black air cleaner, and blacked out exhaust and engine.

Designed to be the burlier of the two, the Forty-Eight Special has a 130-millimeter front tire and 49-millimeter forks. The 7.25-inch high Tallboy handlebars look a little high, but in my personal experience, is probably a pleasure to ride. The much smaller 2.2-gallon “peanut” tank, features rows of bold, horizontal stripes and available in Vivid Black, Wicked Red, and Billiard White. The engine has some more chrome bits than the Iron 1200.

Are these, in fact, new motorcycles? Depends on who you ask. From a dealership and manufacturer perspective absolutely, but for you or me, not really. It’s mostly cosmetic and bolt-on items the average guy could do at home. But that’s the advantage of the H-D brand. Unlike a car, it can easily and inexpensively adjust the looks and ergonomics to boost sales, which are needed right now.

“A Sportster is a relatively easy bike to strip down and reinvent. What we’ve done to create the new Iron 1200 and Forty-Eight Special is what Sportster owners have been doing with their own bikes for generations," said Richards.

The fat-front-tire look is not my fashion, I hate it in fact, but apparently, it sells. The paint scheme, however, I can dig it. As a loyal Harley-Davidson fan and rider, I won’t knock the brand for introducing the two new bikes, I hope it’s a breath of fresh air to move more units, but I won’t run to my local dealership to check them out either. Call me when the XR returns.