Not here in the States, and the same goes for our friends in Canada and Europe. What’s up with that, Amazon? 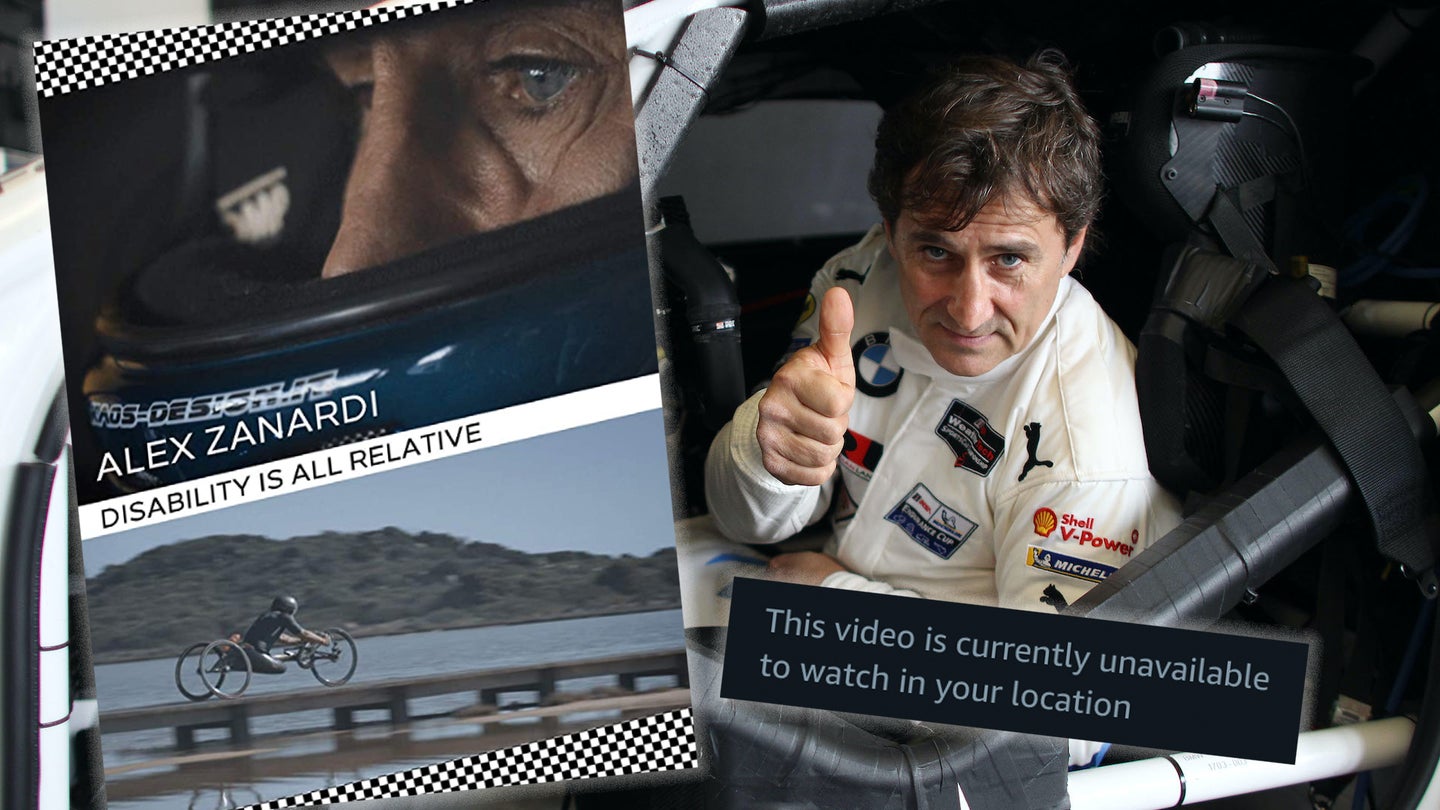 "Disabilities are a very relative condition," said Alex Zanardi to the Orlando Sentinel. "If you can't jump over the problem then you can certainly go around it." An inspiring sentiment from Zanardi, nonetheless, and one he's proven almost unassailable by maintaining a professional racing career even after losing his legs in a gruesome racing crash. But to every rule, there is an exemption, and so far, nobody seems to have found a way of going around the problem of being able to watch his new documentary on Amazon Prime Video.

Update 5/8/21 1:00 p.m. ET: A spokesperson for Rückenwindfilm contacted The Drive and confirmed that the documentary has encountered some localized playback issues, though they claimed that the reason for this is unknown and that Amazon has been contacted by them. However, there currently isn't a timeline for the fix, but the spokesperson promised to follow up with us when there is an update.

Last weekend, there was a fair share of coverage around the new documentary scheduled for debut Sunday, May 2. Alex Zanardi: "Disability Is All Relative" is a 52-minute documentary highlighting the Italian's multi-month preparation for 2019's 24 Hours of Daytona. According to one of the film's production partners, BMW, the film debuted last Sunday on a broadcast in Germany and was meant to become available for Amazon customers there, in the United Kingdom, and the United States. Look up the title in Amazon's library, however, and you'll find it unwatchable, with its play button greyed out with the message "this video is currently unavailable to watch in your location."

This is true not only for Americans but for Brits too as The Drive's U.K.-based motorsport expert Hazel Southwell confirms. This issue plagued other contributors of ours located in various parts of the U.S. and also Canada. Germany's Amazon.de has the same problem, which we confirmed by accessing the site with a German IP address via VPN, and using the proxy of AppleTV doesn't help either.

Any Amazon product arriving four days late (and counting) is all but unheard-of in this, the era of fast Prime delivery at all costs, so something's up, and exactly what isn't clear—not even on Amazon's end. An Amazon spokesperson simply told us was that the title isn't an in-house creation, and to instead contact its producer Rückenwindfilm for the reason behind its delay. The Drive has reached out to both the studio and its production partner BMW, and we will update when we hear back.

Until then, we will keep checking the documentary's page to see if it becomes available. We sure hope so.

If the delivery vehicle is on, so is the camera—and the driver can’t turn it off.