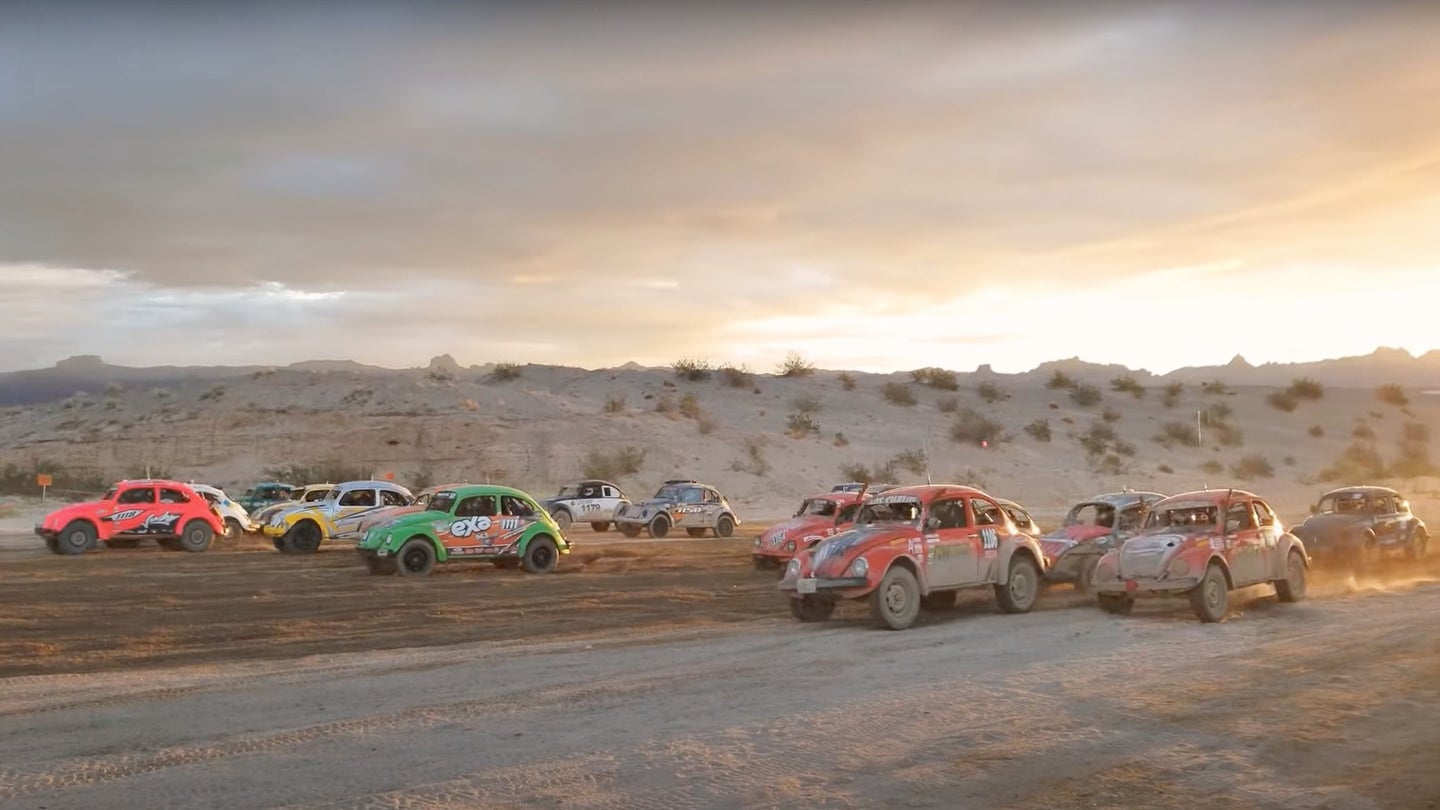 What comes to mind when you hear the word "off-roader?" It's probably something like a Jeep Wrangler, the new Ford F-150 Raptor, or maybe even a Polaris side-by-side. What you probably don't think of, however, is a Volkswagen Beetle; a humble economy car associated more with hippies than sailing over sand dunes. Its affordability and simplicity make it affordable to buy and easy to work on—and therefore highly accessible as a racing vehicle. So accessible, in fact, that when the organizers of a Nevada off-road race waved the green flag to let thy Beetles go, they unleashed a biblical plague of bugs upon the surrounding desert.

You're looking at the start of a race for SCORE Class 11 cars; near-stock VW Beetles that are commonly raced at the Mint 400 and Baja 1000. The source video was originally uploaded to Facebook in December 2019, following the Southern Nevada Off-Road Enthusiasts (or SNORE) Rage at the River event, and was recently reposted for memory's sake—SNORE canceled its 2020 Rage at the River for obvious reasons.

The Beetles depicted here are meant to be near-stock Type 1 Beetles, with some safety, durability, and mild performance upgrades notwithstanding. They're required to have roll cages, fuel cells and five-point harnesses, and are allowed lifted, reinforced suspension, and not to mention mild power boosts via raised compression ratios. Being so performance-limited, they're neither outrageously expensive to build or buy outright; used examples occasionally come up for sale for under $10,000.

Admittedly, Class 11 Beetles aren't the thriftiest way to have a riot off-road, or just go racing. Entering the Gambler 500 is considerably cheaper, if not really competitive, while the 24 Hours of Lemons can scratch the competitive box, albeit while sticking to tarmac. Neither series, though, can quite match the spectacle of dozens of Beetles set off at the same time, bouncing over hills and jockeying for position. It's hard not to look at the videos here and feel the urge to add another box to the old bucket list—even if it's hard to say when we can start ticking things off it again.

We’re not even three weeks into the year and this colorful VW is already a welcome mood booster.