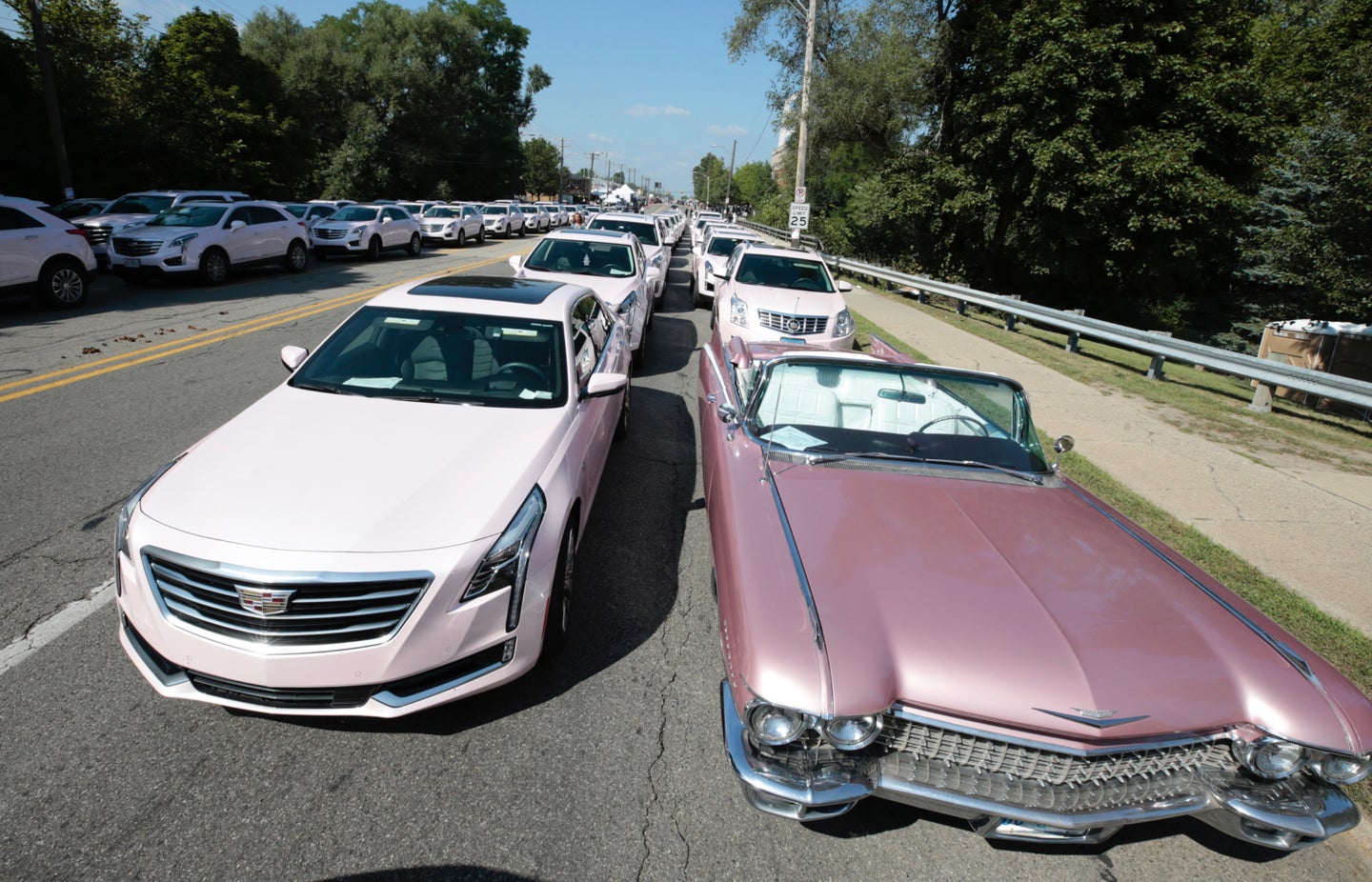 More than 100 pink Cadillacs arrived in the Motor City to honor Aretha Franklin Friday. The cars were lined up and down Seven Mile Road outside Greater Grace Temple where Franklin’s funeral services were held.

Founded in 1902 and currently owned by General Motors, Cadillacs are synonymous with the legendary singer’s beloved city of Detroit. And, pink Cadillacs became best known from Franklin’s 1985 hit single Freeway of Love. Many Detroit natives consider the song an anthem to the city itself.

Cadillac even took out a full-page ad in the Detroit Free Press today:

Inspired by the formality of police funeral processions, Greater Grace Temple pastor Charles Ellis III and his wife Crisette Ellis thought up the idea. According to NPR, Ellis said “My husband said, ‘Wouldn’t it be awesome if we could have a sea of pink Cadillacs parked on Seven Mile Road to greet Ms. Aretha Franklin as she arrives?’”

Ellis wanted it to look like a tunnel of pink Cadillacs as the funeral vehicles drove down the street in between the luxury cars.

The idea in theory sounds grand and when you’re also a national sales director for Mary Kay Cosmetics like Ellis is, the execution is probable. The cosmetics company uses pink Cadillacs as incentives for reaching what it calls “Grand Achiever” level of sales. Ellis said she contacted as many of her company cohorts who have been rewarded with pink Cadillacs for being top sellers and the rest, as they say, is history.

There were also classics in the mix such as the 1956 pink Cadillacs Grand Seville owned by Stuart Popp of Plymouth, Michigan. Popp showed up outside the Charles H. Wright Museum of African American History Aug. 28, and was later asked to drive in Franklin’s funeral procession.

The Queen of Soul’s funeral service at Greater Grace Temple Aug. 31 lasted approximately eight hours and was streamed live online. The Rev. Jesse Jackson Sr., Stevie Wonder, Cicely Tyson, Jennifer Hudson, and former President Bill Clinton were some of the many people who were scheduled to pay tribute to Franklin during the private service.

Franklin died Aug. 16 due to advanced pancreatic cancer. She was 76.