The manufacturer wants to utilize playful characters to decorate its UAVs and draw in younger drone users. 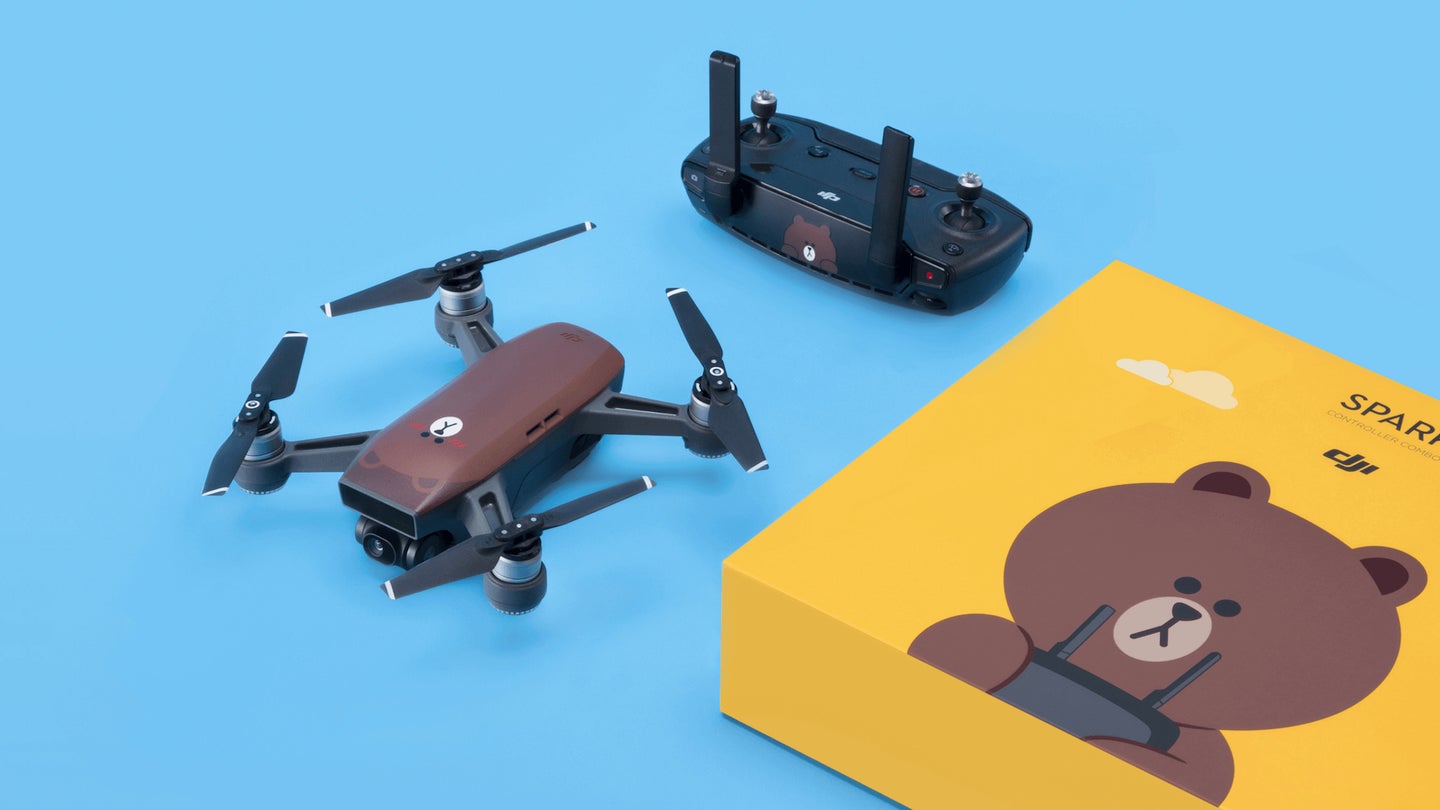 DJI has officially partnered with the Line Friends subsidiary of Asian mobile messenger company, Line, in order to utilize the Line Friends roster of emoticons and characters and inject a sense of playfulness to its drones, according to the DJI press release via PR Newswire.

Line has popularized a wide variety of emoticons and virtual stickers revolving around various animals and other animated characters. DJI’s move here is presumably to attract some of this rapidly growing mobile messenger company’s user base, by adorning its unmanned aerial vehicles with a bit of fun and color. In terms of business, there’s a clear demographic pivot on display here, with the partnership’s first collaboration arguably aiming to rope in younger customers.

The Line Friends (Brown) L Spark, as they’ve officially labeled this partnership’s first output, is your standard DJI Spark drone but adorned with the face of Brown, a bear immediately recognizable to anyone familiar with Line’s messenger app. In that regard, DJI is seemingly keen on growing its popularity in Asia, as the chat apps core user base is centered in Japan, Taiwan, and surrounding territories.

“DJI is excited to announce our character partnership with Line Friends, which shows DJI’s enthusiasm for making drones fun, accessible and relevant to more consumers,” said Monica Suk, senior communication manager at DJI. “The DJI Spark earned its reputation as the smallest, yet powerful flying camera. It made flying a drone extremely easy, fun and more personalized.”

We’ve covered the DJI Spark before, and have found its gesture-based control feature a pretty impressive strategy to attract entry-level drone enthusiasts. This new partnership appears to be yet another business-savvy approach to growing DJI’s global reach, following announcements of a new drone protection subscription service and facilitated unlocking of geofenced areas for commercial clients.

“Similar to things we carry in our bags, a drone is becoming a lifestyle accessory,” said Suk. “This special edition we are launching with Line Friends will take this concept even further and make storytelling and sharing exciting, and a part of our everyday life.”

We've seen similar efforts on behalf of competing drone companies before. When Polaroid licensed its name out to get into the drone game, it was meant to attract the older generation. FlyBlocks, in turn, targeted kids who enjoyed playing with Lego sets. DJI's latest effort, meanwhile, seems like a way to get smartphone-savvy kids interested in its drones, rather than appealing to their hobbies or recreational interests.

Ultimately, while a version of the DJI Spark only differentiated by a bear emblazoned on it won’t do much for the more advanced drone users here, it’s certainly a smart way to reach out to a more novice, and younger demographic. The DJI Line Friends (Brown) L Spark drone is now available online for customers in North America, China, Hong Kong, and Korea.

The world’s leading UAV manufacturer just introduced another reason to consider its products over the competition. Meet Enterprise Shield protection.