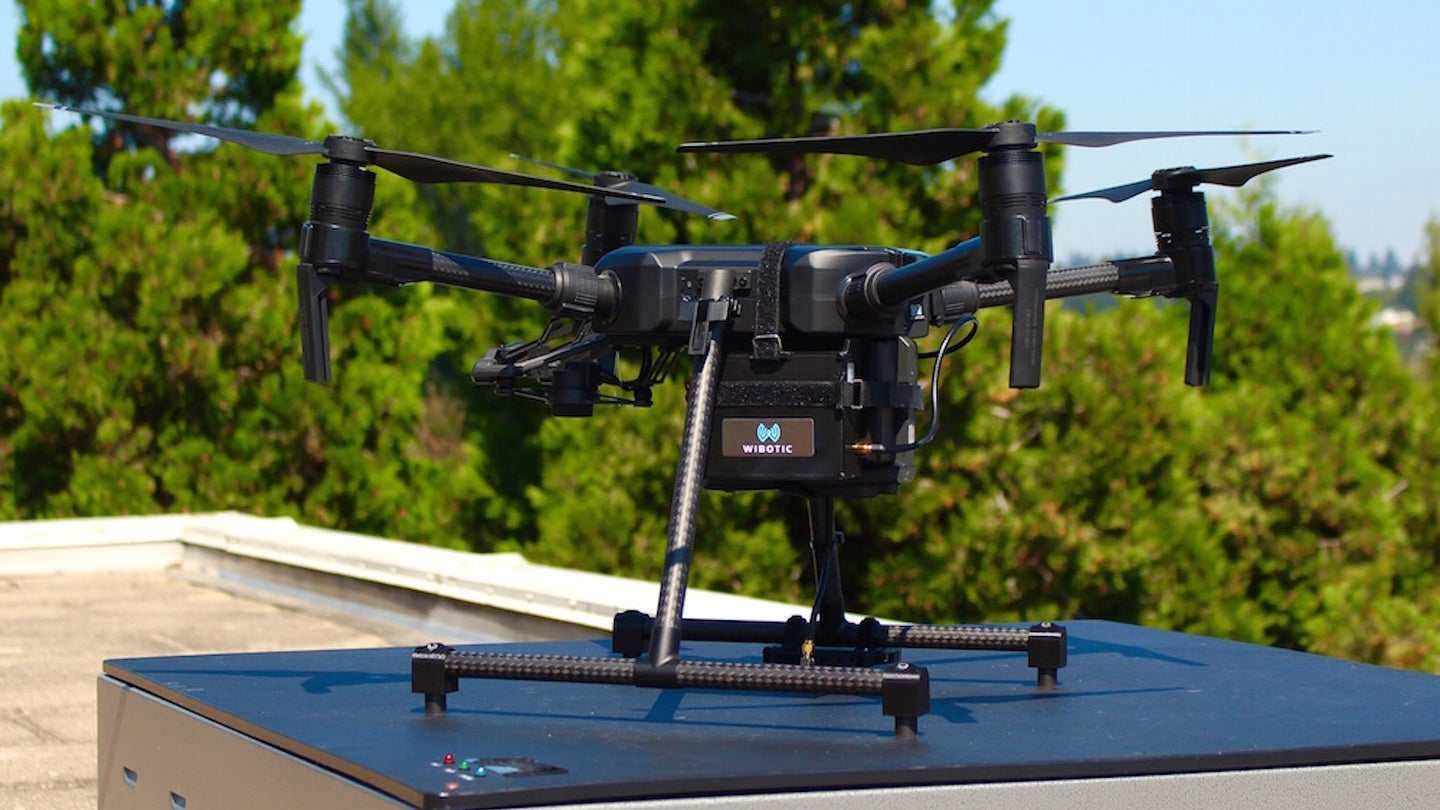 Wireless charging and solutions company WiBotic announced a new wireless charging system for DJI’s Matrice 200 and 210 drones on Thursday, which could autonomously keep these drones powered and feasibly serve the security, surveillance, search and rescue, inspection and monitoring industries.

The Drive recently covered Avansig’s project to develop an aerial, indoor surveillance system which relies on Skysense’s wireless charging technology to autonomously go on patrols without the need for manual battery replacements, and it now seems as though the world’s leading drone manufacturer—DJI—is keen on edging into this particular drone niche as well.

With unmanned aerial vehicles inching closer to total autonomy through increasingly sophisticated software infused with machine learning and artificial intelligence, it appears that wireless charging is the last remaining element to making hypothetical scenarios such as continuous use and functionality in various industries a reality.

In other words, if you want a fleet of drones to be at-the-ready whenever a pressing issue arises, you’ll want them to stay powered as long as necessary without the need of manual battery replacement. In order to feasibly garner that autonomous, humanless capability, solving the charging problem is imperative. For DJI, it seems, WiBotic’s solution is the current answer to that particular question.

“Pairing our WiBotic wireless power system with these new DJI models creates a real power couple for corporations,” said WiBotic CEO Ben Waters. “Countless commercial and defense applications are greatly enhanced by the use of wireless power and we make it really simple to make that happen.”

Building off of that, the process is fairly intuitive and rather simple. The WiBotic PowerPad is compatible with the two aforementioned DJI models, and after a basic setup process that WiBotic claims takes a mere 10 minutes, allows the vehicles to land atop, charge fully and deploy back into action. This pad contains transmitter components and is capable of withstanding substantial moisture, dirt and corrosion elements.

This opens up a long list of utilitarian and commercial uses in the UAV world. For instance, if one is in charge of running a sizable construction project where they use autonomous drones to monitor progress and provide team members with functional data and analytics, you can now spend even less time with the drones as their charging is automated and they can run around the clock without a user's attention.

Or how about heading a search and rescue agency that only has two drones at its disposal? You could send one of them out to search for the missing person while the other one charges and have them tag-team the operation without a lost minute of vital time.

Fortunately, the possibilities here are endless, and in an increasingly complex world with a similarly endless amount of emergency situations and opportunities to maximize efficiency, an intuitive way to charge your aerial tools alleviates much of complicating hurdles along the way. While wireless drone charging may be utterly useless to those of us who merely want to take flight, snap some pictures, or race each other for the sheer competitive nature, this system could prove unbelievably useful to those in charge of corporate, humanitarian and preventative industries.