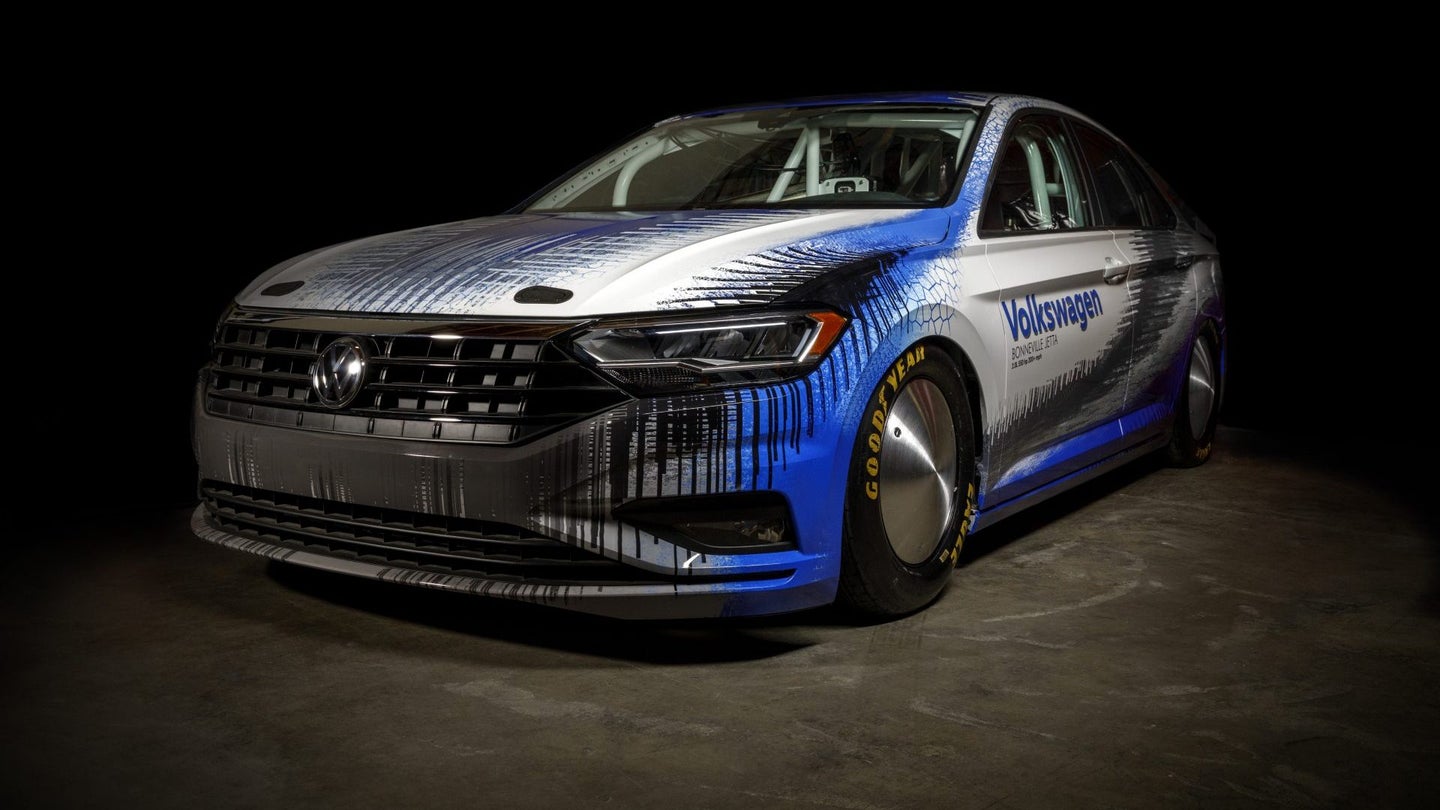 Volkswagen announced Friday that it has modified a 2019 Jetta sedan to compete in this year's Bonneville Speed Week between August 11 and 17, at the Bonneville Salt Flats in Wendover, Utah.

The Jetta will compete in Category D, in the /BGC modified sedan body sub-class, among modified gasoline engine competitors. It was prepared by Bonneville specialists at THR Manufacturing, who lowered the car and fit low-drag wheels, complete with salt flat-spec tires. Its interior was peeled back to fit a roll cage, six-point harness, racing seat, and fire suppression system.

Go power is given by a boost-stuffed, 2.0-liter Volkswagen EA888 four-cylinder engine with direct injection, a variant of which will appear in the upcoming Jetta GLI. Volkswagen's senior manager of product and technology Mark Gillies tells The Drive that the company's horsepower target lies beyond 450, though the car has not yet seen a dynamometer for tuning.

Like the road car, this Jetta is front-wheel-drive, through traction on the salt's granular surface is aided by a limited-slip differential added to the Jetta's transaxle. According to Gillies, the Jetta's gear ratios are likely to be maintained too, due to tall factory overdrive ratios in high gear.

Stoppage is aided by parachutes.

Between the tuned engine and already-sleek bodywork of the factory Jetta (its drag coefficient is 0.27), Volkswagen hopes the Jetta will be capable of pushing past the class record of 208.472 miles per hour, set by John Hanson Sr. in 2016.

"This was a truly fun project to be involved in," stated Reto Brun, director of Volkswagen's California Design Center, in the car's press release. "We wanted to highlight the sporty nature of the Jetta and give the car design graphics that would make it really stand out on the alien-like environment of the Bonneville Salt Flats. We wish the team luck as they attempt to make this the fastest Jetta—and the fastest production-based Volkswagen—ever seen!"

"We are delighted with the reception for the all-new 2019 Jetta in North America," added Hinrich J. Woebcken, CEO of Volkswagen's North American wing. "With the attempt on the Bonneville speed record with the Jetta, we want to underline the Jetta's sporty credentials and get customers excited for the more performance-oriented Jetta GLI on the way."

Volkswagen's Bonneville Jetta will be on display at the Fan Fest for the Pikes Peak International Hill Climb this Friday.