Maya Weug has been selected from the FIA’s Girls On Track program. 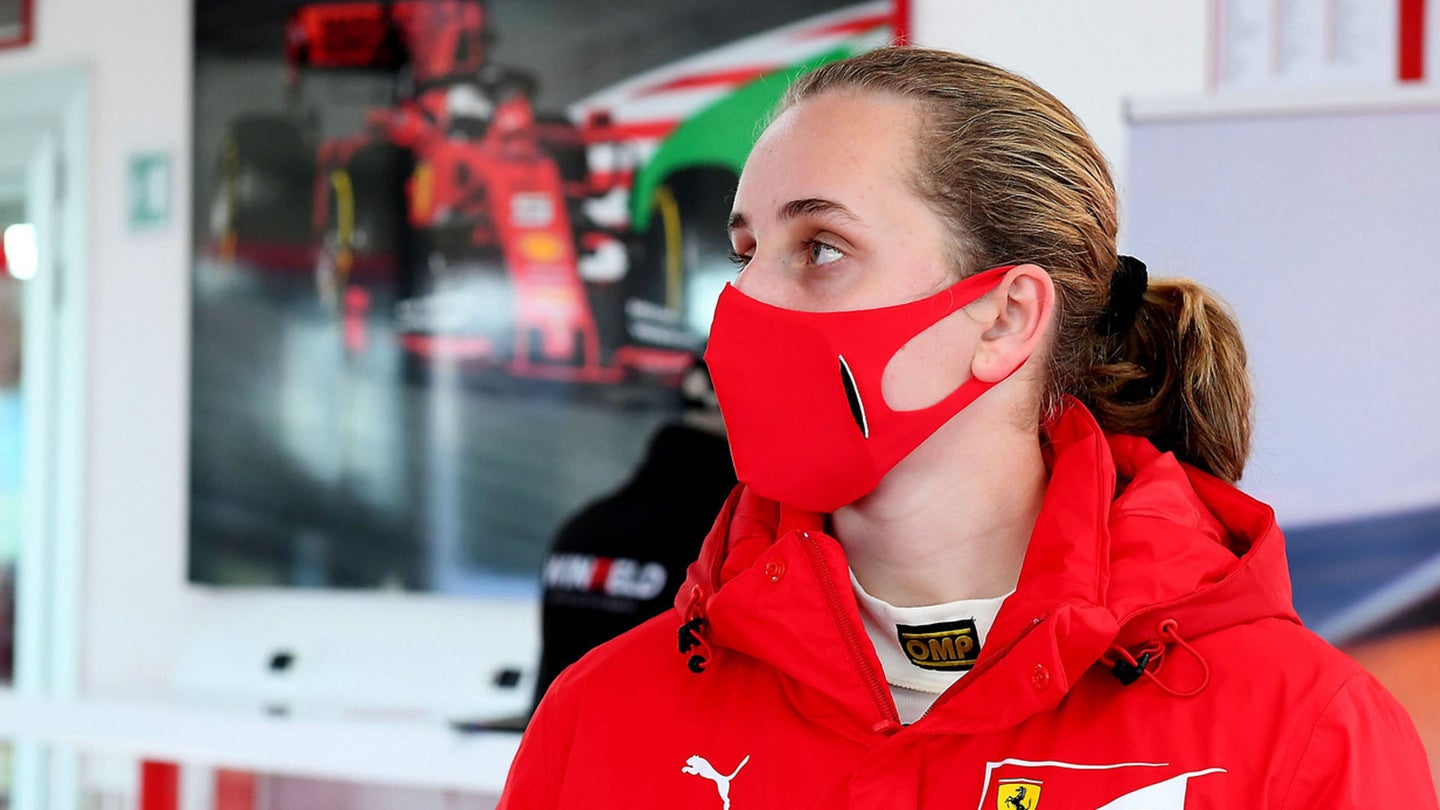 Ferrari is Formula 1's longest-standing team, having been part of the sport for 70 years. Although Maria Teresa de Filippis competed in the series as early as 1958, there has never been a female driver involved in the Ferrari team or driver academy—until now. After a rigorous, eight-month-long selection process supported by the FIA Women in Motorsport Commission, 16-year-old Maya Weug has been selected to join the Scuderia's treasured young drivers' program.

The Girls On Track initiative was launched shortly before the start of the 2020 F1 season, last June. The scheme was loosely part of the FIA's diversity initiatives and was planned for the long term, saying, "The collaboration sees both parties commit to a four-year programme resulting in two drivers potentially joining Ferrari for an FIA Formula 4 Championship season."

You might question whether giving just two girls single-year deals in regional F4—which is the lowest junior category of cars in Europe—would go very far to address the gender imbalance in motorsport. It's such an entry level that the Ferrari Driver Academy has actually only ever sponsored two previous racers through it; Lance Stroll, now driving for his father's Aston Martin F1 team and Guanyu Zhou, who ultimately left for Renault's academy.

That said, the promise of a Formula 1 teams' academy place is no small deal for any driver. Only a handful of women have previously made a junior development program; Beitske Visser was given a very limited chance in the Red Bull Junior Team, Marta Garcia did a season in Spanish F4 for Renault and Jamie Chadwick is officially part of the Williams junior program as a development driver.

Simona de Silvestro and Tatiana Calderon were both signed to Sauber (now branded as Alfa Romeo) as development drivers with a view to progressing their careers and opportunities for F1 testing, and Susie Wolff and Maria de Villota held professional testing roles at Williams and Marussia, respectively.

There are currently nine boys in the Ferrari Driver Academy. But numbers games aside, this is a monumental moment. For Ferrari, more than womankind, they have their first chance to negotiate the challenges facing female racers on their pathway to motorsport's upper echelons and at a great time to do so. The all-female W Series is supporting F1 next season and pressure is mounting to make the sport at large less unequal; billionaires have daughters, too, after all.

Leaving cynicism aside, the Ferrari Driver Academy is a credible program. Two drivers have now graduated to F1 from it; Grand Prix winner Charles Leclerc and 2021 Haas driver Mick Schumacher, so Maya has a chance of progressing if she can find the results, which the rigorous program will have assured Ferrari that she can.

Weug said, of coming out victorious, "I will never forget this day! I am so happy to be the first female driver to join the Ferrari Driver Academy. Winning the final stage of the FIA “Girls on Track - Rising Stars” programme makes me realise that I was right to pursue my dream of becoming a racing driver.

"I will give my all to show the people who believed in me that I deserve to wear the Ferrari Driver Academy uniform and I can’t wait to come to Maranello to start preparing for my first season of single-seater racing," she continued.

Ferrari was keen to praise her, with head of the Ferrari Driver Academy Marco Matassa saying, "Despite very limited experience in a single-seater, she had a good turn of speed and demonstrated a mastery of the car that meant she could immediately implement the instructions she was given."

He continued, "This attitude, along with the results she produced both on and off the track, as well as her open and determined personality, led us to conclude that Maya is ready to start her adventure with us at the FDA."

Should women's places in racing be conducted as open talent calls or competitions for limited places at the table? Probably not. In fact, definitely not. But now that Maya has her historic place, this is a huge opportunity for both Ferrari and herself.

You’ve Been Named CEO of Ferrari. What Do You Do?

The reins are yours.