One look at the lineup proves this is the biggest sim race of 2020. 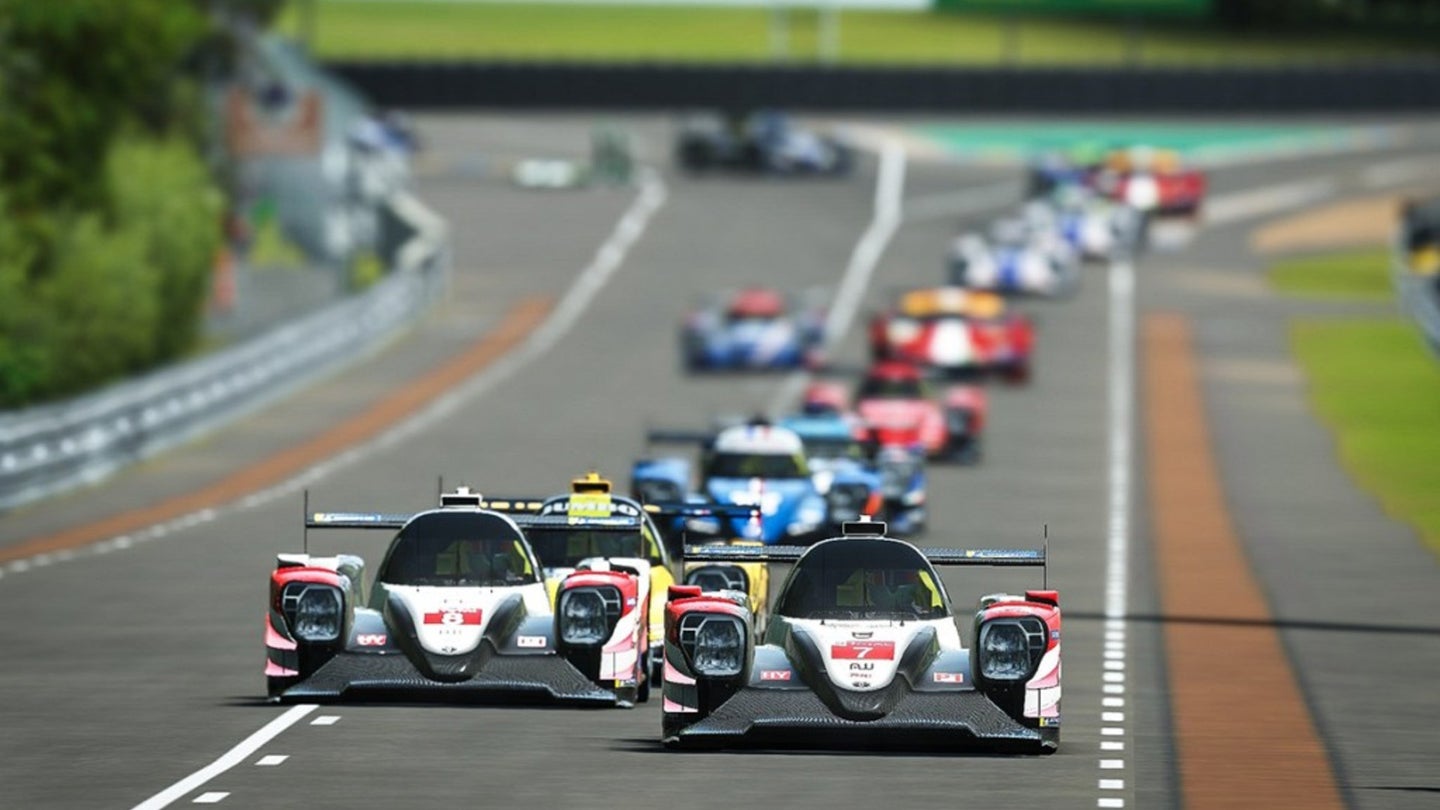 During normal times, thousands upon thousands of fans would be flocking to the Circuit de la Sarthe right about now to witness the 2020 24 Hours of Le Mans. Y'know, the world's most famous endurance race that features the greatest sportscars and sportscar drivers. But COVID-19 had other plans, forcing the World Endurance Championship and Automobile Club de l'Ouest to reschedule the iconic event for mid-September.

But there's hope, because this weekend some of the sport's top talents will compete in a twice-around-the-clock virtual race—and we all know the only thing more difficult than actually driving for 24 hours is staring at a screen for 24 hours.

It's hard enough to keep track of all the teams, drivers, and cars in the real race, let alone one that's hosted on a sim platform. Because of that, we've comprised a one-stop guide to help you understand all the intricacies and specifics of the upcoming endurance competition.

In short, some of motorsport's best. Ferrari ace Charles Leclerc, Grand Prix veteran Reubens Barrichello, and the ever-exciting Max Verstappen headline the list of those with Formula 1 greatness to their credit, though it doesn't stop there. Indy 500 champions Juan Pablo Montoya, Simon Pagenaud, and Tony Kanaan are also joining, while there's an expansive list of drivers who've tamed la Sarthe in the past. Toyota Gazoo Racing's Mike Conway, Kamui Kobayashi and—oh yeah—Fernando Alonso are slated to compete as well.

Each team is allowed four drivers, of which only two can be considered sim racing professionals. The remaining two may be FIA international license holders, which—although great in their own regard—may not be as savvy as, say, virtual star Jimmy Broadbent. He'll be driving for the No. 67 Mahle Racing Aston Martin Vantage GTE car.

Here's the official list with every driver from each of the 50 teams, published by race officials: 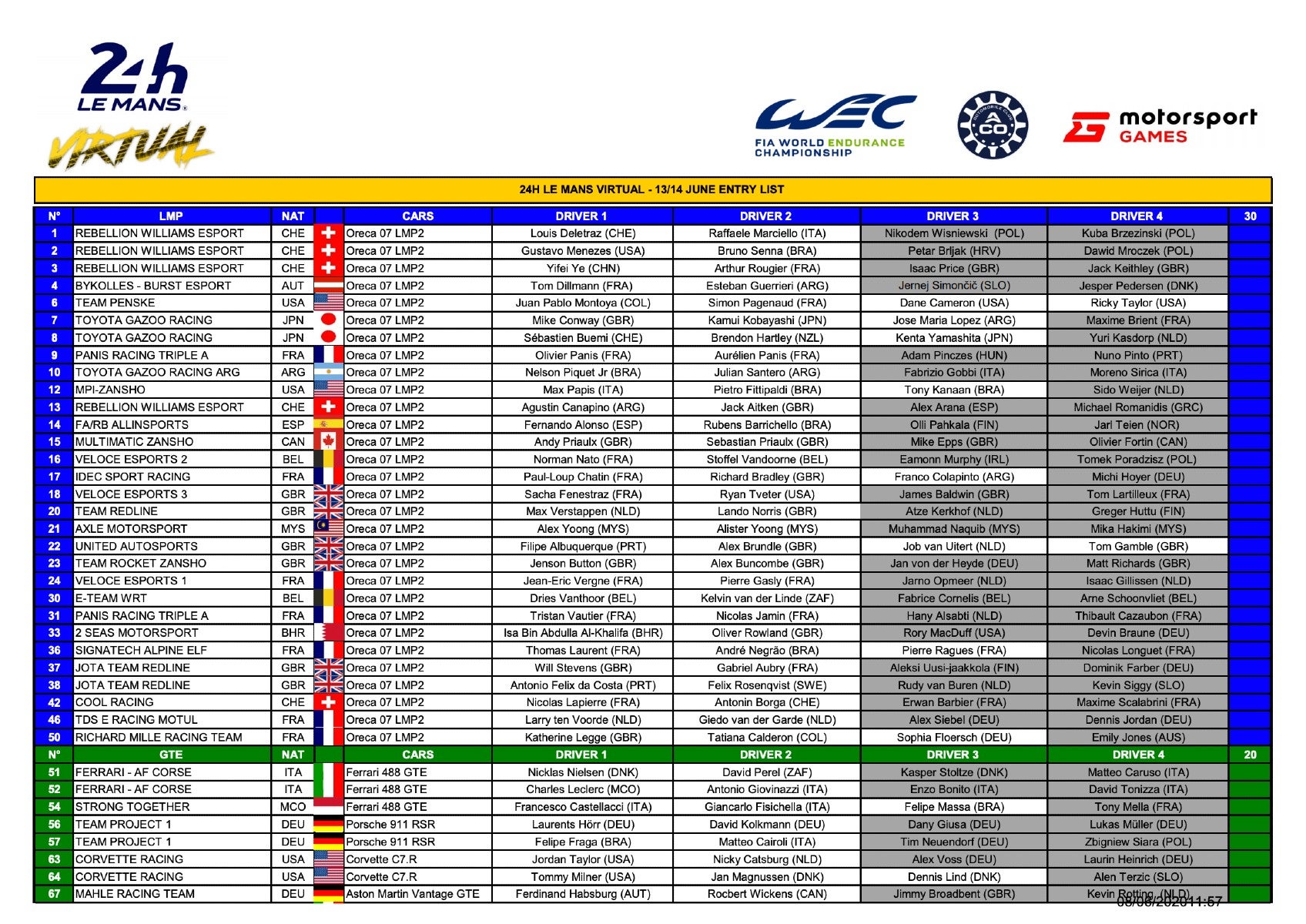 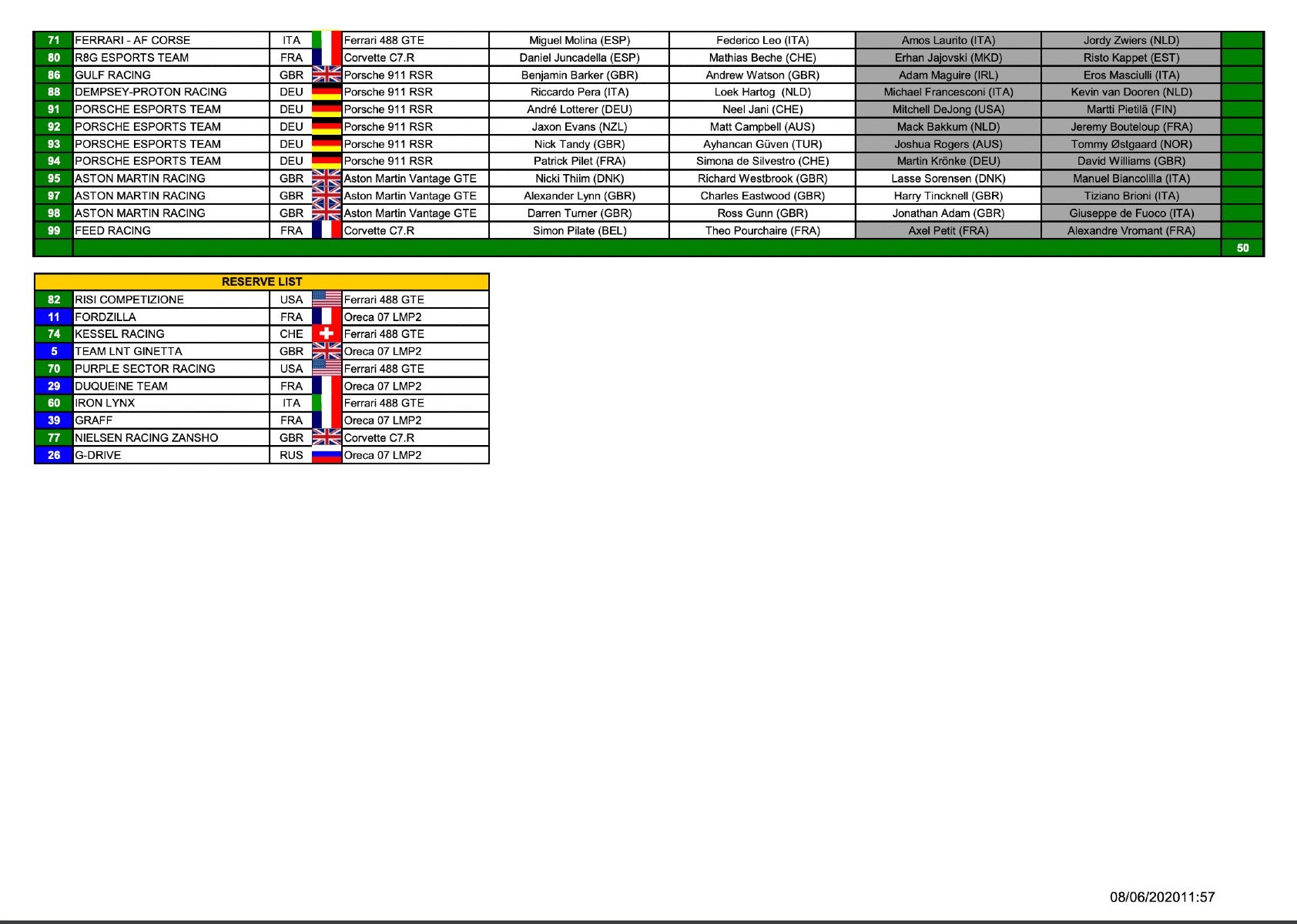 What Will They Be Driving?

A little bit of everything, from Oreca LMP2 prototypes to Ferrari and Porsche GT cars. There's no LMP1 class here so as to avoid any unfair matchups, meaning those in the top-tier class will be competing in equal equipment. As for the GTE category, a virtual Balance of Performance (BoP) has been put in place to ensure parity.

Teams will be able to tweak their cars' setup, allowing for a bit of customization and flexibility. That'll be key to who stands out amongst the stacked field—whether it be virtual or IRL, setups are crucial.

Everyone will be competing on the rFactor2 sim platform, which allows for driver changes, dynamic weather conditions, day/night transitions and, of course, multi-class racing. 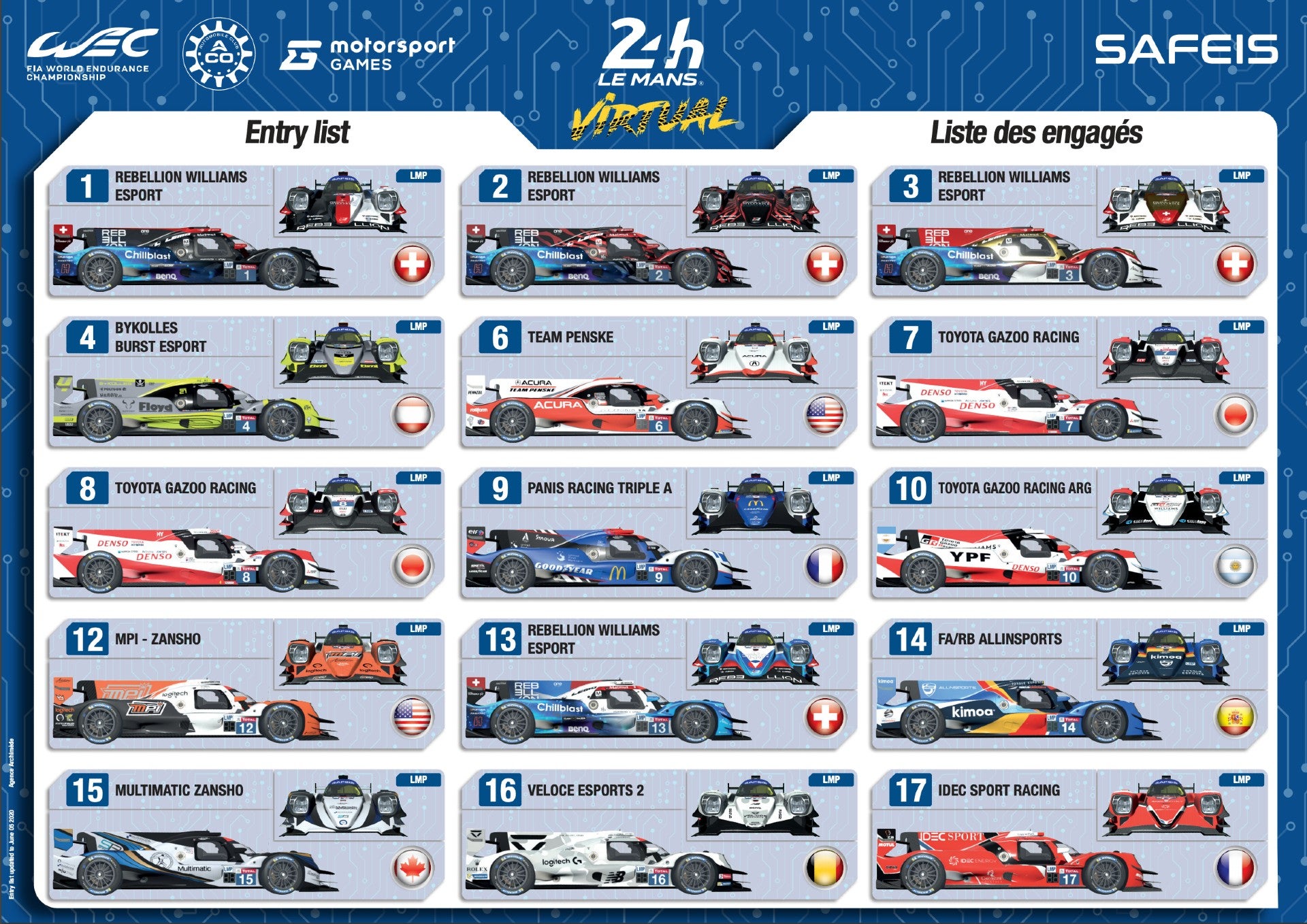 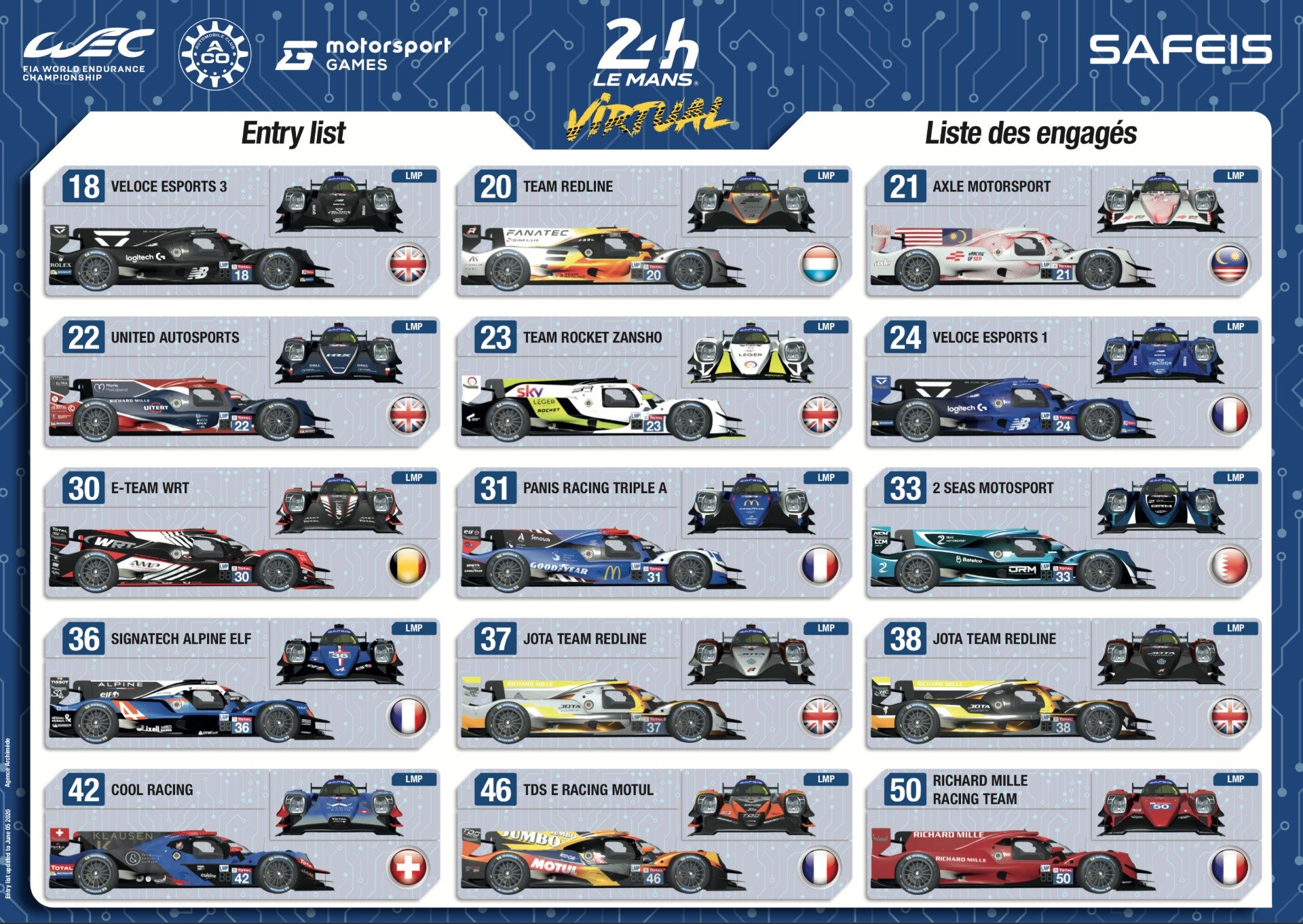 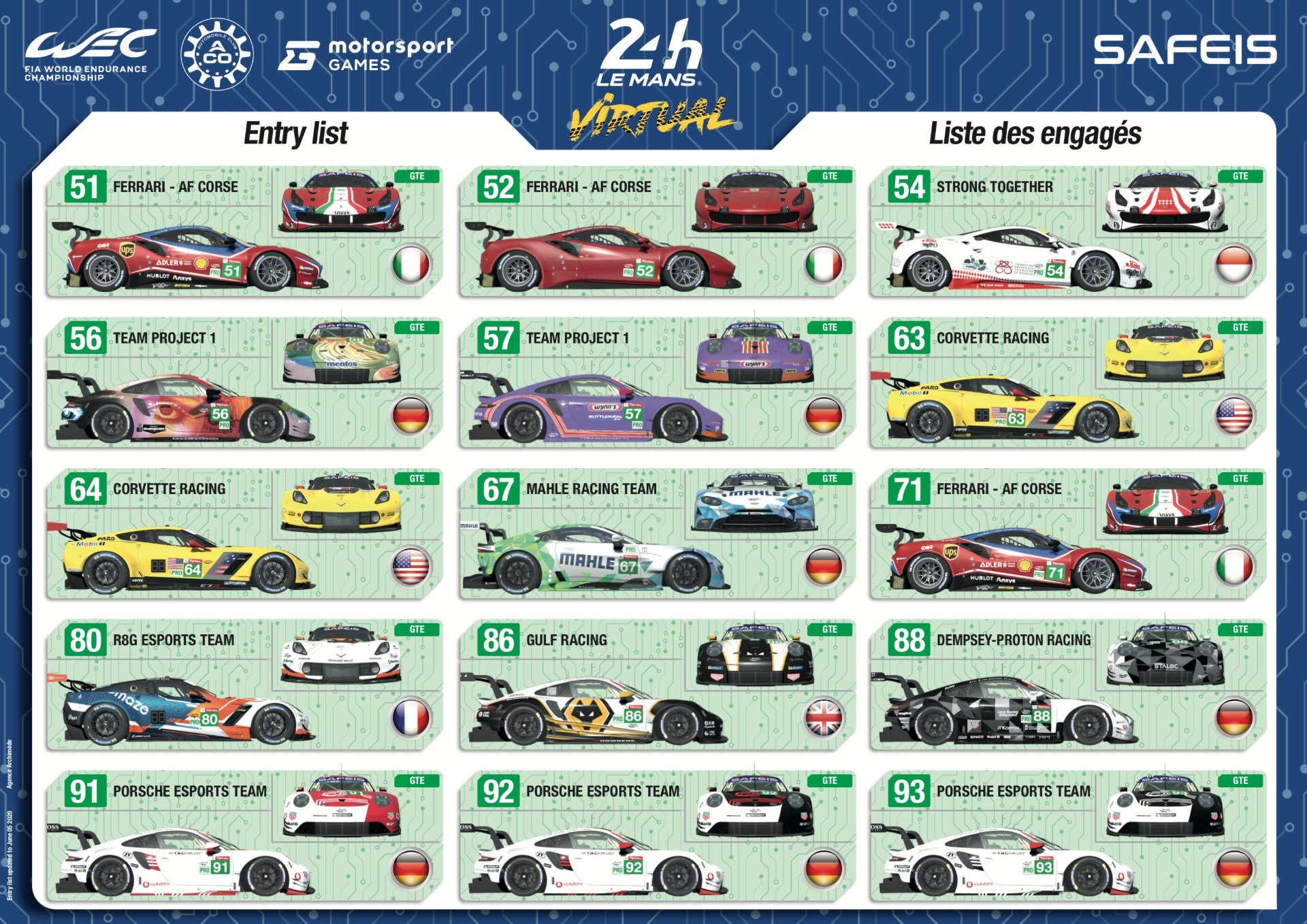 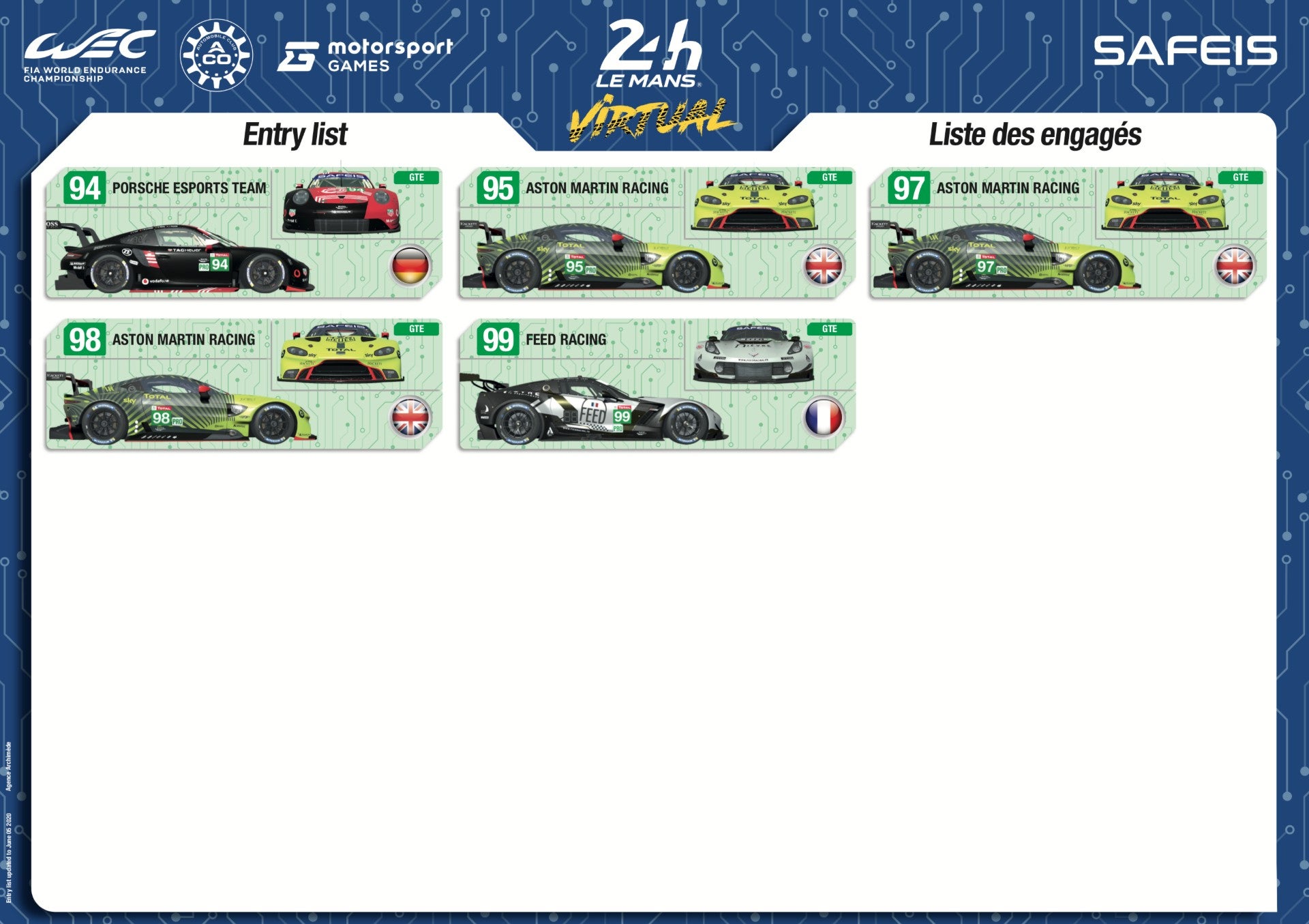 Yeah, plenty! They're mostly in place to maintain healthy competition, just as you'd see in the real race. Drivers are required to complete at least four hours behind the wheel, though the maximum time allowed for each racer is seven hours. No one may drive more than three hours in a five-hour period, and if any team disobeys these rules, penalties will be awarded by race control.

When and Where Can I Watch It?

The race will kick off Saturday, June 13, at 9 a.m. ET. It'll run until Sunday, June 14, at 9 a.m. ET—you probably guessed that—with nonstop action in between.

The main broadcast will be hosted on Motorsport TV's website, although many of the teams and drivers will have their own streams to keep up with, too. Feel free to search around and find your favorite, and know that every on-duty driver is required to join the race's Zoom meeting so there's no ringer tomfoolery.

Check back with The Drive as we keep an eye on the race this weekend, bringing you updates and results on what's likely to be the biggest sim race of 2020.