The veteran's celebratory donuts were a little less rowdy without fans cheering in the stands. 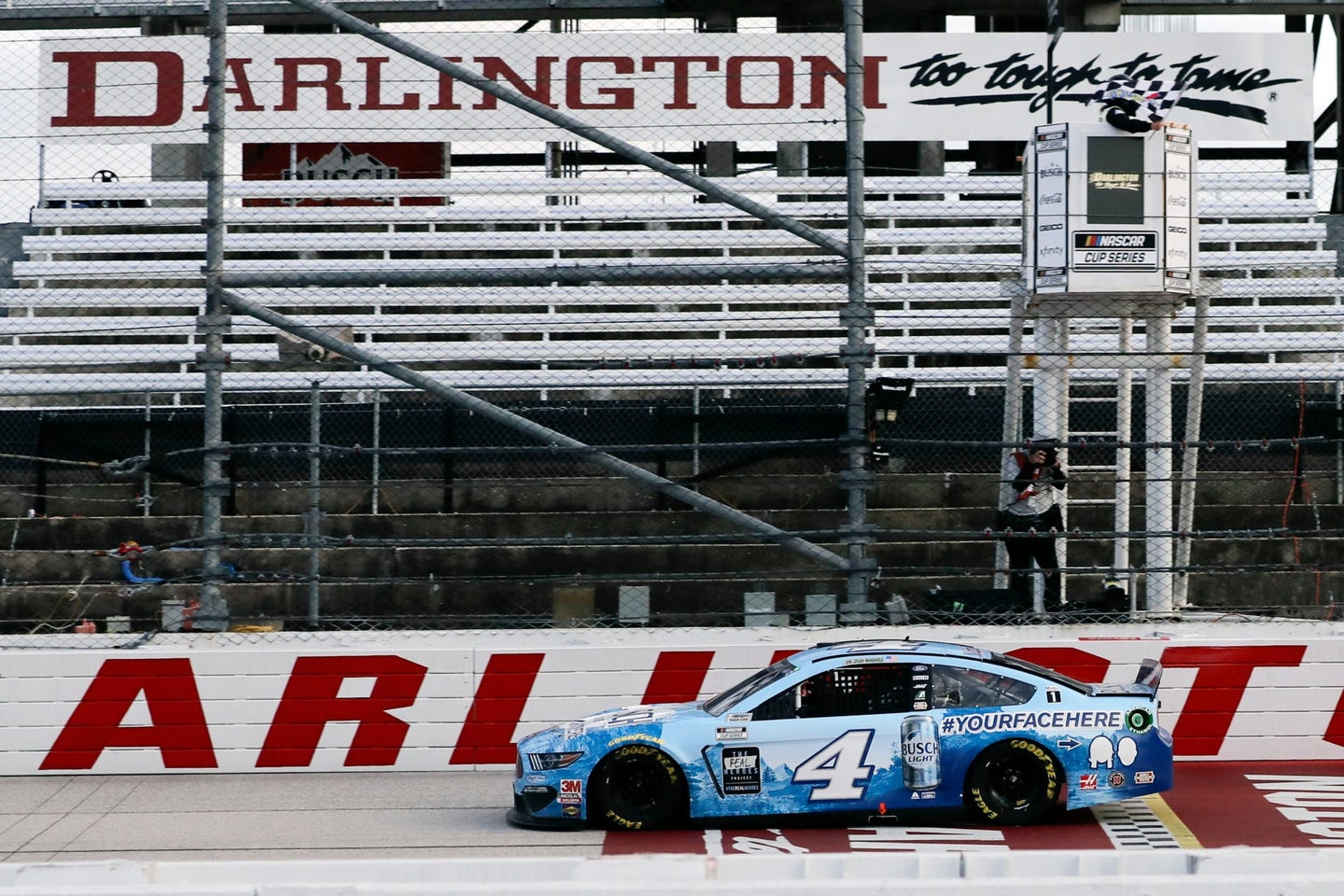 With a new approach to real-life racing, the NASCAR Cup Series returned to action at Darlington Raceway on Sunday. No fans were in the stands and on-hand personnel was limited, but a field of 40 Chevrolet, Ford and Toyota stock cars took to the track as per usual. Even after a two-month break, Stewart-Haas Racing veteran Kevin Harvick continued his string of solid results and claimed his first win of the unusual 2020 season.

NASCAR's first green flag in 10 weeks was quickly brought to a halt when Ricky Stenhouse Jr. crashed his No. 17 Ford Mustang on lap one. This set the tone for the afternoon, which saw nearly a dozen cautions in total but ran green during the closing laps as Harvick pulled away from the crowd.

Jimmie Johnson was also put out of the race in short order, a disappointing result for the seven-time champ who hoped to kickstart his final Cup Series season with a good finish. To add insult to injury, Johnson was leading the race when he spun into the wall.

William Byron, who showed his sim racing skills during the eNASCAR iRacing Pro Invitational Series, proved his chops IRL when he won the first stage. Shortly after, though, the No. 24 Chevrolet driver suffered a popped right-rear tire, forcing him out near the race's halfway point.

Then, Team Penske's Brad Keselowski won stage number two ahead of eventual runner-up Alex Bowman in the No. 88 Chevrolet.

Harvick stands as the only driver to finish in the top-10 in every race this year, and he improved on his second-place finish at Phoenix, the last race before NASCAR went on its coronavirus hiatus. He did so in dominating fashion, too, as he led more laps (159) than anyone else on his way to career win number 50.

“I just want to thank everybody from NASCAR and all the teams for letting us do what we do,” Harvick told Fox Sports when parked by the flag stand. “Then we won the race and it’s dead silent out here. We miss the fans."

“It’s a pretty big honor to win 50 races in this deal and I just have to thank all my team guys and everybody for what they’re doing. … We’re bringing home the trophy.. It doesn’t seem real (that he’s won 50 races)."

“Man, I’m excited. It is weird because there’s nobody up there (in the stands). … I’m speechless.”

The NASCAR Cup Series will race again on Wednesday, once more at Darlington, as it looks to cover lost ground from its forced time-off.