Fernando Alonso proves yet again that he's living out all of our dreams by driving whatever he can get his hands on. 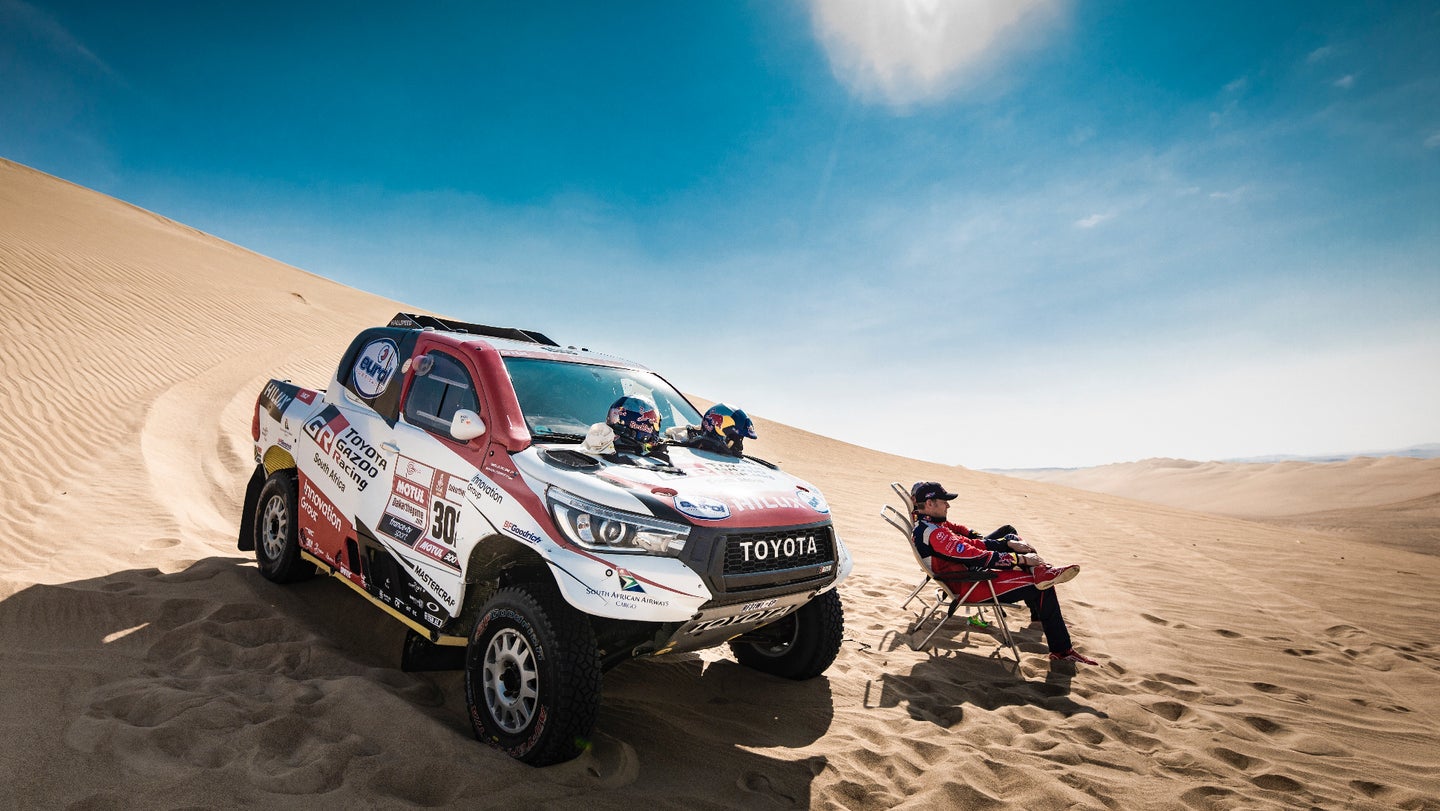 Two-time Formula One champion, Le Mans, Rolex 24, and Sebring 1000 winner Fernando Alonso's post-F1 life just keeps getting better and better. Apparently he's not content with merely hopping into whatever seat he can find on paved courses. RaceFans reports that Alonso's set to test out a Toyota Gazoo Racing South Africa Hilux built for the Dakar Rally.

A source close to the team told RaceFans that Alonso "is evaluating whether to add Dakar to his to-do list."

Dakar is one of the most grueling rally raids on earth, taking two weeks to covers nearly 5,600 miles of some of the world's most punishing terrain.

The test itself won't be in Dakar, or in the recent years' Dakar Rally home of South America. Rather, RaceFans understands that it will be in the Toyota team's home country of South Africa, near the Kalahari Goerapan resort. It's a field camp with many off-road trails and semi-arid desert conditions like you'd encounter on the Dakar Rally itself. Transporters for the test were set to leave Monday night from the team's base near the Kyalami circuit, just outside Johannesburg.

So far, Alonso's goal still remains to nab the Triple Crown of wins: Monaco in F1, Le Mans, and the Indy 500—and only Indy is left on that to-do list. But he's shown that he's open to trying whatever else he can fit in, running off to do the 24 Hours of Daytona the past couple years, among other things.

After winning at Daytona this year, he hinted to France 24 that his wish list might involve some unpaved pursuits:

This [Daytona] is not part of the Triple Crown, but if I win Indianapolis, this will be Quadruple Crown. Right now, full focus is on the Indy 500. I'm thinking I'm trying to do something more maybe in different disciplines that are not only circuits.

But I need to think, I need to plan, I need to make sure that I'm competitive, to have the right people, the right teams, and the right preparations. Whatever adventure is next, I will not do it if I'm not competitive or I don't have a shot for winning.

The aim is to do something unprecedented in motorsport.

While RaceFans notes that Alonso wasn't interested in doing a rally in 2018, perhaps we're seeing a change in heart. At the time of this writing, Alonso's Instagram story shows that he's on a plane, so I want to believe!

Keep living our dreams, Alonso, and we'll keep vicariously living through whatever crazy racing scenario you jump into.