If it’s cool enough for Bond... 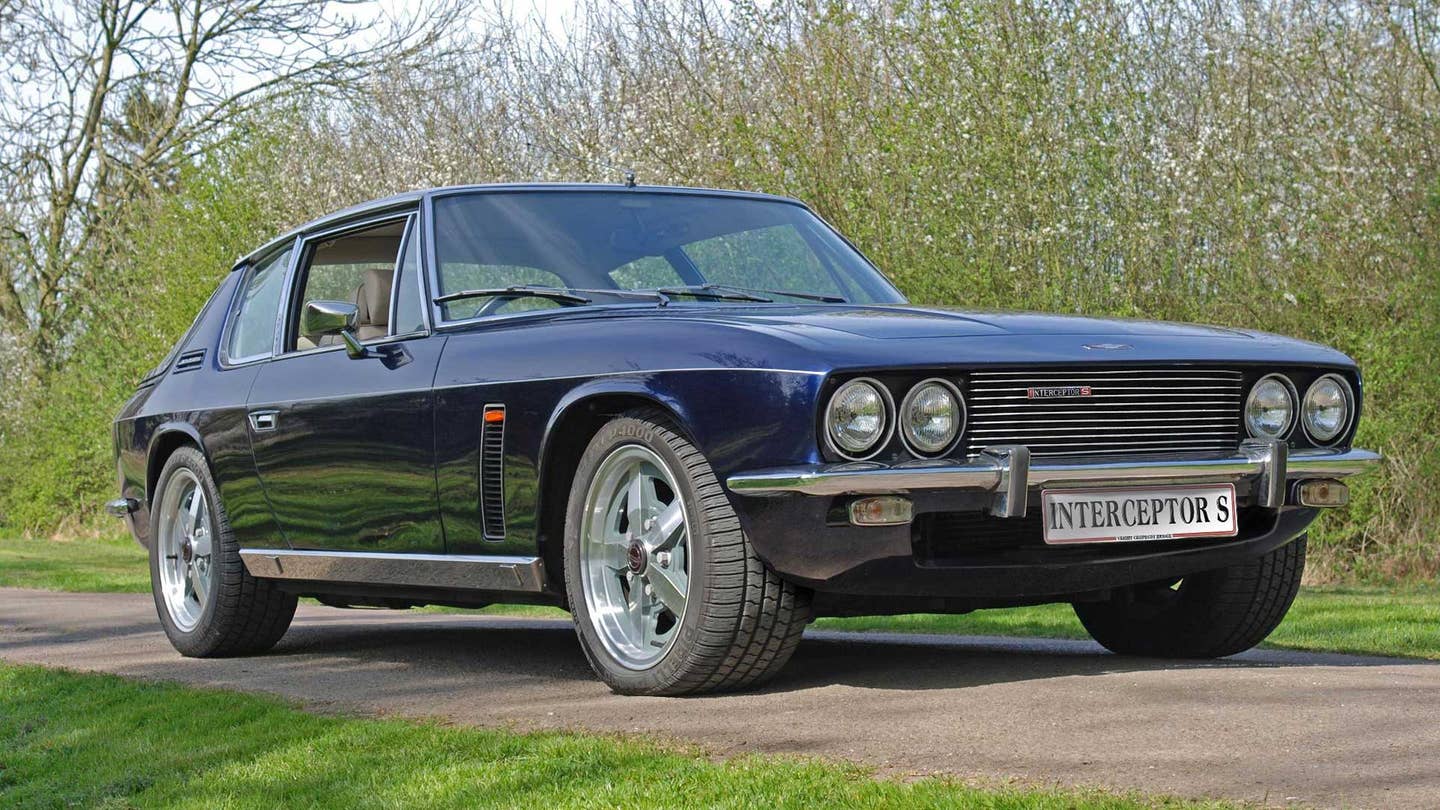 When award-winning British writer Will Boyd was writing Solo, the latest novel in the James Bond continuation series, he was faced with a dilemma: What should James Bond drive? The book is set in 1969, well past time for Bond to trade in his pre-war Bentley and somewhere amorphous in his relationship with Aston Martin, so Boyd set about determining what the coolest ‘69 car might have been. His solution? A lusty, intercontinental orphan outlier called the Jensen Interceptor.

Designed in Italy, built in England and powered by a massive 6.3-liter Chrysler “Golden Commando” V8 (and, eventually, a even larger 7.2-liter Mopar mill) and three-speed automatic, it not only encompassed the cosmopolitan globetrotting nature of Her Majesty’s most famous spy, it also had debonair features like Connolly leather seats, burled walnut trim and a broad enough assortment of center console mounted toggle switches to guarantee that at least one must activate an oil slick or seat ejector.

However, Oliver Smith, from expert Interceptor restoration and restomodding shop Cropredy Bridge in the U.K., questions the grand tourer’s role as 007’s chariot.

“Perhaps it’s because of the large engine and robust appearance, but the car is a bit of a bruiser,” he says, “not an outright thug, but someone with quiet purpose. Not as smooth as James Bond, but more civilized than the Kray twins.”

One thing on which everyone can agree, the Interceptor is distinctively styled. Long before the Mazda RX-7, Porsche 944, Fox-body Mercury Capri or late-era C3 Corvette popularized the bubble-backed glass rear hatch, the Jensen was rocking it, full and wide. “Though it divides opinion, but also excites, the large ‘greenhouse’-style rear window is very much of the period,” Smith says of the astronaut helmet-like back windshield. “It fits with the Space Age feel that was so popular in the late Sixties, when the car was initially penned by Carrozzeria Touring in Milan.”

Presaging cars like the Porsche 928 and BMW 633i, its front fender vents gave the appearance “of shark gills,” Smith says. “They break up what would otherwise be a large flat expanse of the side of the car.”

For those in the know, these strakes can also be used to differentiate a run-of-mill Interceptor from the FF, its exotic sibling. FFs have two vents on each side, placed to help disguise the vehicles’ five-inch increase in length, a stretch that was made to allow for the Jensen’s revolutionary Ferguson Formula four-wheel-drive system, one of the first to be installed in a production car. (The FF also had one of the first consumer vehicular applications of anti-lock brakes.)

No matter one’s opinion on Bond, bubbled butts or cartilaginous, skeletoned predators, resounding agreement surrounds the enhanced collectability of these handsome, if unorthodox 2+2s. According to our friends at Hagerty—monomaniacal monitors of everything having to do with vintage vehicular valuation—prices of the entire range of Jensen Interceptors have more than doubled over the past five years, an increase of nearly 103 percent. The most valuable cars, those from earlier in the production run, have increased by over 150 percent.

Even with such increases, the price of entry for these luxurious, quick, sophisticated GTs is still relatively low. The overall average for a “condition 3” (i.e., average) car is under $40,000. (The handsome 1972 blue model featured in photos here sold in 2014 at a Mecum auction for just over $34,500.) Figure on a $10,000 premium on the most desirable early years. Cars drop off in output, appearance and desirability post-1973, but if you’re pinched for price, those end-of-run cars command about half the average price.

Smith cites a few different categories of Interceptor as particularly worthy. First are the very early cars that were built at the Vignale factory in Italy before production moved in house to Jensen’s base in West Bromwich. These cars, and others from the Mk I series produced before 1969, had a very delicate, almost Italianate dashboard design that was quite different from the standard British holes-in-wood style. “The large curved dial binnacles are reminiscent of Ferrari and Maserati in the Sixties,” Smith says.

He also recommends seeking out the elusive Interceptor SP. This was an upgrade made in 1971, the first year that Jensen upsized from the Chrysler 383 to a mammoth 440 cubic-inch V8. In addition to the larger engine, the one-year-only SP had a triple row of two-barrel carburetors (SP stands for “Six-Pack,” the Mopar designation for this 3x2 gas-guzzling layout). This engine produced a claimed 385 horsepower, making it the most potent car Jensen ever built. Only 232 were made.

Interceptors went through something of a nadir not long ago, when low prices combined with higher costs of maintenance to leave an unconscionable number of the 6,400 cars produced in marked disrepair—owned by people unable or unwilling to care for them. But the market has corrected for that in recent years.

The car’s broadly international parentage, advanced design and engineering, and relative obscurity have raised its profile. Yet unlike other obscure, limited-run, boutique cars of the era like the Aston Martin V8 or Citroën SM, parts for the basic running bits like the engine and TorqueFlite transmission can be picked up at any local American auto parts store.

You’ll have to deal with abysmal gas mileage, the usual British electrical gremlins and an endless stream of people asking if the diffusely parented car is, like some category-defying platypus, Australian. But that’s part of the joy of driving an insider’s collectible.

“I don’t think that it takes itself too seriously,” Smith says. And therein lies its appeal.