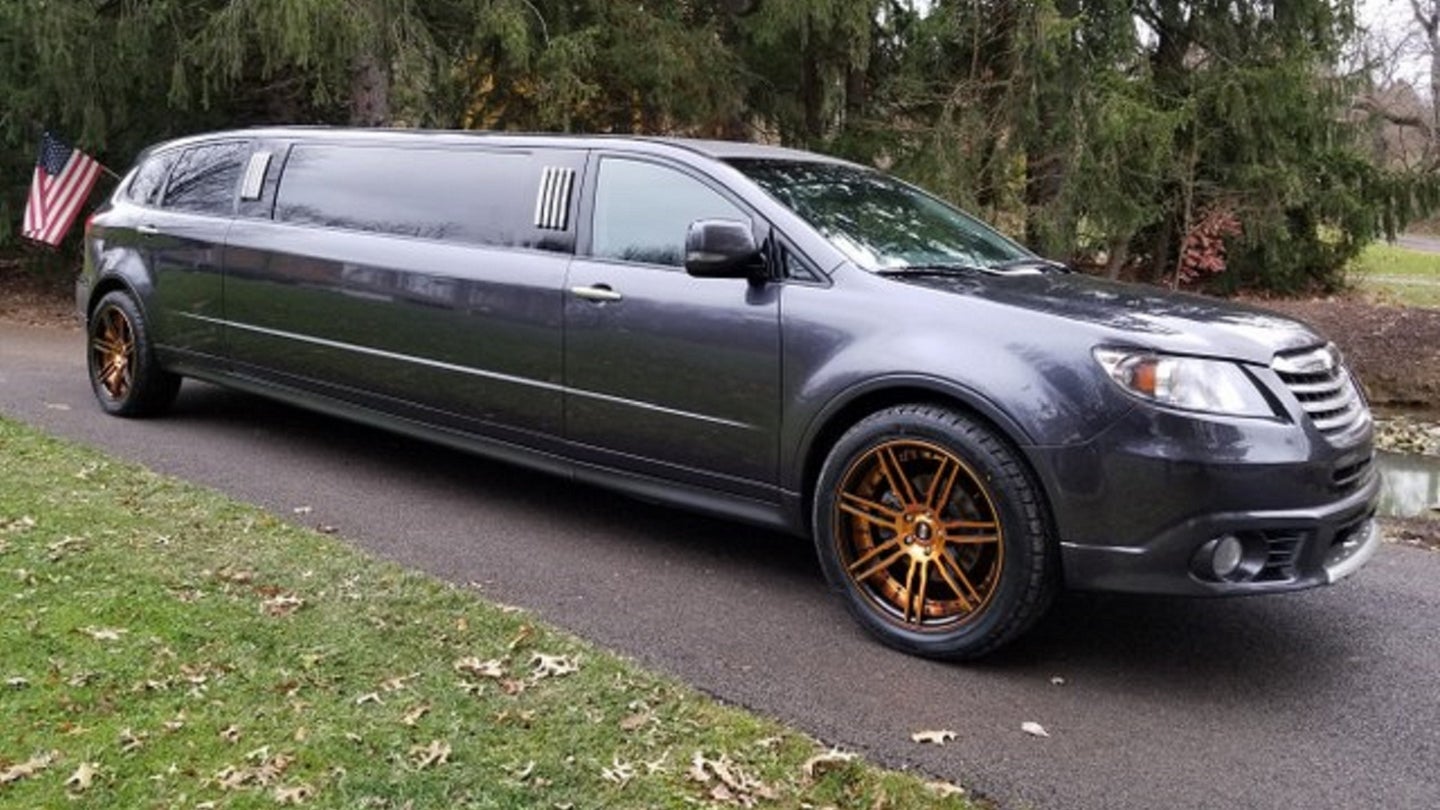 What do you drive if you were the son of the car dealership mogul responsible for Subaru's fanatical popularity in New England? Naturally, you wouldn't stoop so low as to drive yourself. No, instead you'd have Subaru build you a Tribeca stretch limousine, right there on the same production line as the ones for the peons. And then, three years later, you'd get a second one. That second Tribeca limo is for sale in Pennsylvania right now.

Ernie Boch was one of the most successful and powerful car dealers in New England. Car Talk tells the story of how after Malcolm Bricklin brought Subarus to America for the first time with the little Subaru 360, Boch bought the entire Subaru of New England dealer network in January 1971. When all-wheel drive was introduced, Boch knew he had a hit on his hands since the cars were perfectly suited for New England's famously erratic weather conditions. Subaru of New England grew from its original 15 dealers to 64 today.

Boch passed away in 2003, leaving his billion-dollar fortune and car dealers of numerous brands to his son, Ernie Boch Jr., who remains Subaru of New England's CEO today. The junior Boch enjoys his lavish lifestyle, and in the mid-2000s commissioned a Forester XT to be converted into a stretched limousine for himself, to the amusement of New England NASIOC forum members. As if the limo itself wasn't proof enough, his vanity plate "SNE" for "Subaru of New England" shouted to the world exactly whose limo this was.

In 2007, he switched to a then-new Tribeca, which was stretched right on Subaru's production line, but sent to an independent coachbuilder for completion. It, too, wore the distinctive "SNE" license plate. Unfortunately, the Tribeca was one of Subaru's rare failures, mainly due to its unusual styling that looked not like a Subaru, but an Alfa Romeo with the grille turned upside down (which, in fact, is exactly what it was).

The Tribeca's face was restyled a few years later, but not soon enough to recover from its poor reception. Boch Jr. had yet another Tribeca limousine built for himself, this time from a facelifted 2010 model. The limo available in Pennsylvania is that very car.

Information on the website about this car is sparse. There are no interior pictures, and aside from the aftermarket gold wheels (perhaps a tribute to Subaru's rally heritage), it's not clear exactly how the car has been modified beyond the obvious stretch. Naturally, it's equipped with Subaru's 3.6-liter flat-6 engine, necessary to haul its extra bulk around. It has a mere 42,384 miles and can be yours for the low, low price of just $39,995. Who needs a loaded STI? That's what all Subaru fanboys drive. Why not ride in style with this stretched Tribeca instead?

As Ernie Boch used to say, "Come on down!"