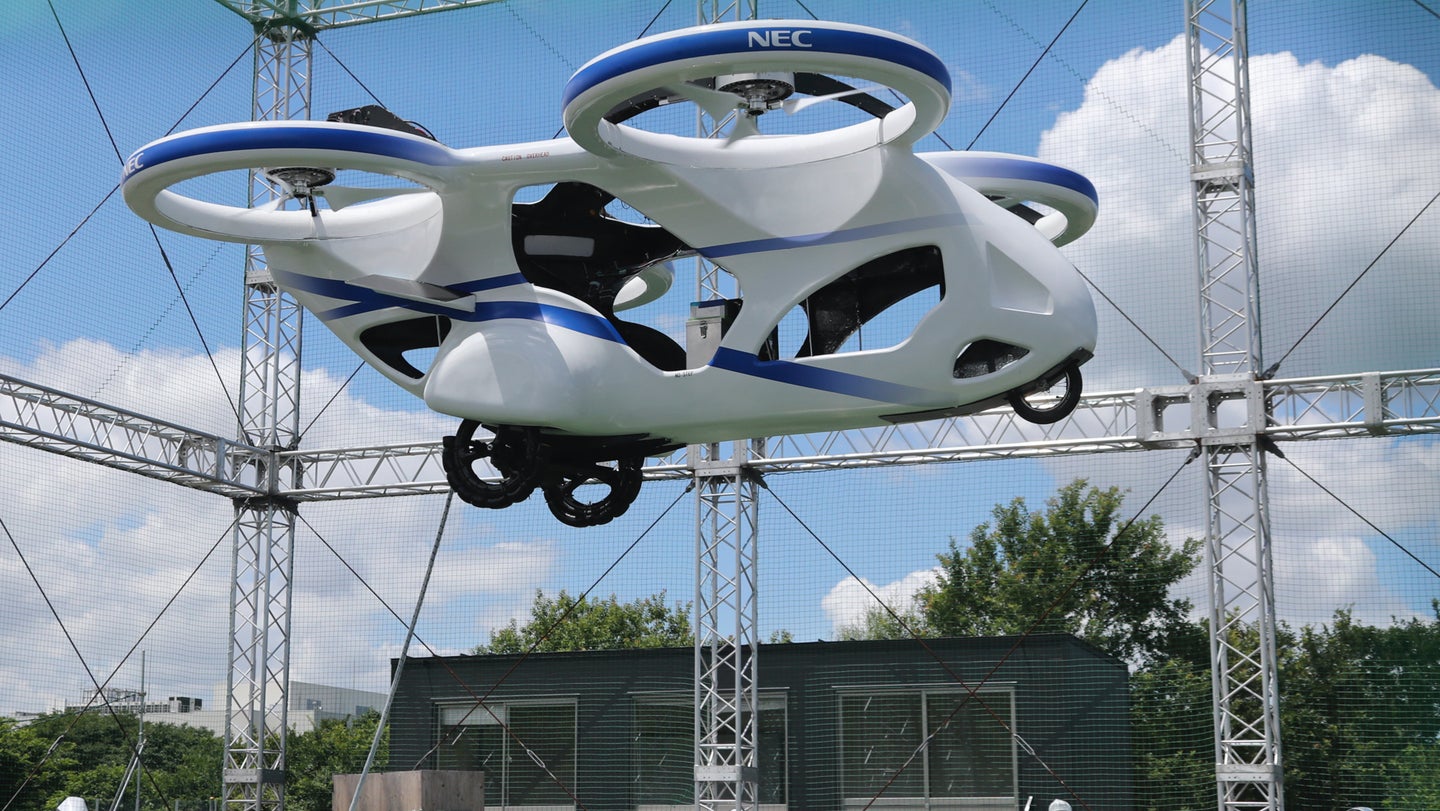 General Motors recently expressed an interest in aerial taxis, including what some call "flying cars," reports Reuters. These sure sound a lot like helicopters, albeit ones designed to fly lower-lying routes. They take-off and land vertically, only needing a pad of open space as opposed to a runway. They have rotating wings or rotors in place of the usual propellers, and can utilize electric motors to do so.

Two people familiar with the matter confirmed GM's interest in aerial taxis to Reuters, but GM officials have admitted publicly that it's something they're looking into. The company wants to use its electric vehicle technology—particularly its Ultium electric batteries—for other transportation-related ideas. This would make sense as a means of future-proofing an automotive company against an ever-changing market if flying cars weren't always such a flame-grilled, ketchup-soaked nothingburger.

“We believe strongly in our EV future and not just for vehicles,” said GM CEO Mary Barra at an RBC conference, as quoted by Reuters. “The strength and flexibility of our Ultium battery system opens doors" to other things, which she said included "aerial mobility."

“It’s an area we’re really excited about and looking at," GM spokesman Stuart Fowle told Reuters about the air taxi idea. He declined to elaborate further as to what that might mean.

According to sources who spoke with Reuters, GM is still considering whether to supply, build or partner with a company in the so-called aerial mobility space. Fellow carmakers Hyundai, Volkswagen, Toyota, Geely and Daimler are all working on some form of small flying vehicle in some capacity already.

But oh no, don't call these "air taxis" helicopters! They fly lower to the ground, I guess. These not-a-helicopters are meant to alleviate street-level congestion by letting people travel above the roads. You know, by adding more vehicles to travel in, not unlike the ground-level ride-share "mobility" companies that ultimately added to congestion in many cities. It's time to expand that congestion upwards, I guess?

That's why it's hard to believe that these kinds of low-flying helicopter-adjacent vehicles would actually solve anything. Reuters notes that air taxis could add to air traffic if they caught on, which would inevitably increase the likelihood of an air collision. Those would be pretty dangerous, given that a malfunction or crash could drop the vehicle on city streets.

The most responsible thing to do would be to heavily restrict low-air traffic patterns and licensing to operate a flying car, but how many people are realistically going to jump through those extra hoops? Or pay for it, for that matter? Limited capacity also typically results in higher prices.

Investor, corporate adviser and managing director of Synapse Partners Evangelos Simoudis told Reuters that he wasn't surprised that GM might be interested in this, but also admitted that the market for flying cars will take longer to develop. (That is, if it ever does.)

Some effort has at least been made at figuring out how to regulate this kind of lower-flying air traffic, as Reuters notes that the World Economic Forum and the city of Los Angeles rolled out a set of principles to guide urban air mobility systems. Both entities are working with other cities to get those standards in wider adoption. New Hampshire beat them to the punch, however, becoming the first state to adopt a set of flying car regulations.

That being said, there is at least something to this "aerial mobility" thing: investment cash. Investors have put at least $2.3 billion into over 100 different aerial vehicle startups ranging from air taxis to drones, according to PitchBook numbers cited by Reuters. It's that magic M-word, baby. Toss enough buzzwords like "mobility" and "disruption" around, and you might be the next Nikola or Bird!

They Keep Working on Flying Cars, But You Still Won’t Own One Any Time Soon