Adam Woodworth's hobbies are drones, Legos, and Star Wars. It's no surprise he built a functional Lego helicopter UAV. 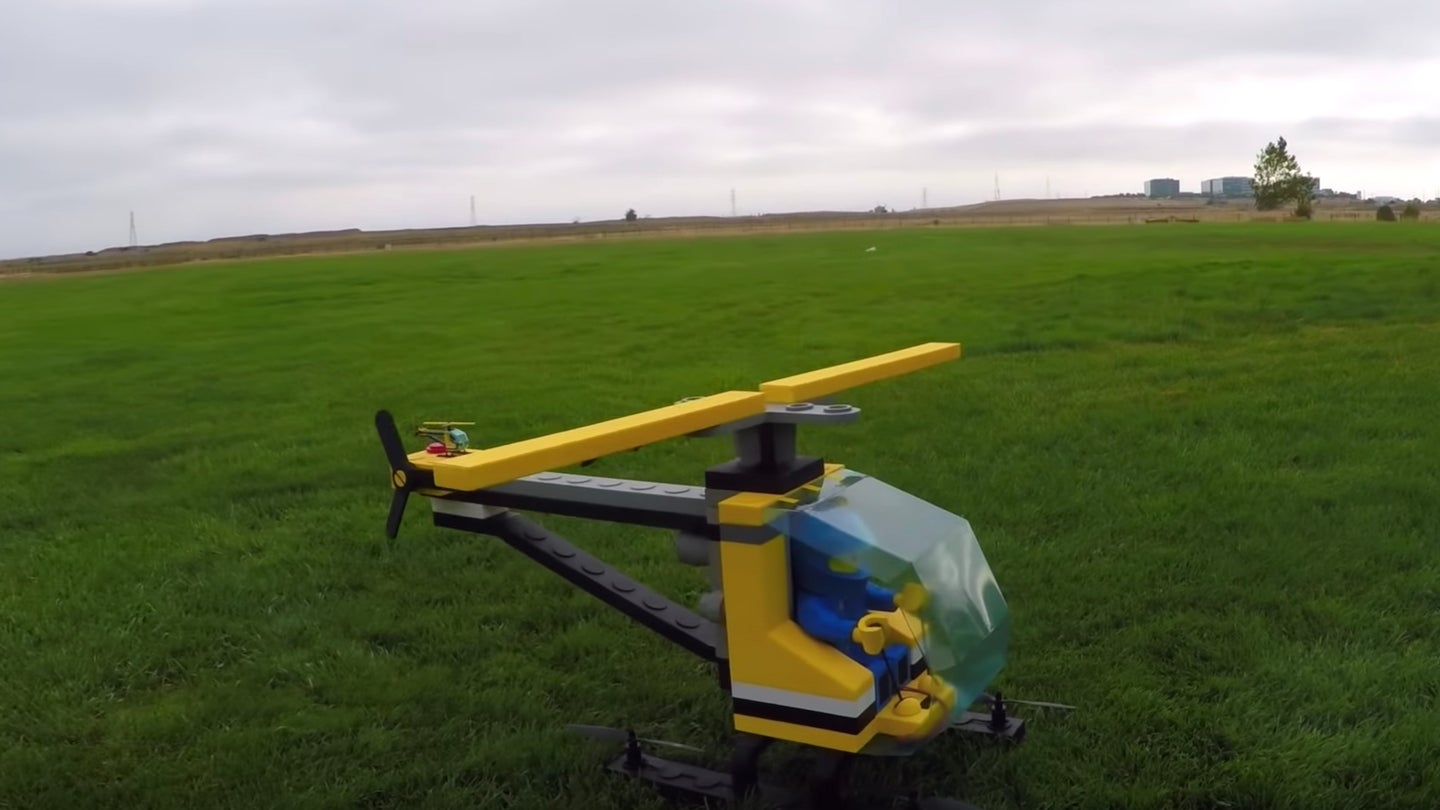 Adam Woodworth has been building fully operational, pop culture-inspired drone models for years now. As an avid Star Wars enthusiast, of course, he didn’t let those skills go to waste. Woodworth has already proven his mettle when he built functional Podracer unmanned aerial vehicles, as well as a model of the immediately recognizable Millennium Falcon. Fortunately for us, he didn’t stop there. Woodworth most recently built a functional Lego helicopter drone, according to Business Insider. For those of us who grew up on the globally beloved toy bricks and are now passionate drone enthusiasts, Woodworth’s efforts are pretty cathartic to look at.

This particular Lego drone is an odd beast, as it simultaneously looks like an enlarged miniature of a standard Lego model of yesterday, but flies just like the fully-functional UAVs of today. To be fair, the given name is a bit of a misnomer, as the helicopter’s rotor doesn’t actually work. This is basically a quadcopter drone, whose rotors are fitted to the helicopter’s landing gear. While that might seem like a cop-out to some, it’s arguably all the more impressive that Woodworth retained the aesthetics of a chopper, while hiding the drone’s rotors as creatively as possible.

As Woodworth’s Instagram account will tell you, the man is an “airplane stuff doer and aspiring foam whisperer.” You’d be forgiven to think that sentence doesn’t tell you much, besides the man’s recreational passion for aerial activities, but you’d be wrong. The helicopter isn’t actually constructed of Legos at all, in case you haven’t noticed yet, but put together with lightweight foam that enables it to fly more reliably.

It’s a departure from the man’s previous work, which saw Lego planes and Podracer UAVs have a substantial amount of actual, plastic Lego pieces comprise the vehicles. The decision to suddenly use foam, of course, makes complete engineering sense, as these earlier works were far smaller and lightweight than the helicopter, which needs all the help it can get in terms of weight reduction and functional piloting.

Personally, I find this kind of home-brewed ingenuity on display fascinating, and generally quite impressive. Being able to modify your quadcopter is becoming an increasingly common skill, as even the world’s leading drone manufacturer has started to assuage its customers with that ability. Constructing a Lego helicopter UAV that completely resembles the classic, ground-based toy bricks, on the other hand, is another matter (particularly, when it can actually fly). The cherry on top, of course, is that you won’t ever accidentally step on it, barefoot, while it’s lying on your bedroom floor.

Below is the YouTube video, “Giant Flying LEGO Helicopter” showing the miniature as it takes flight.