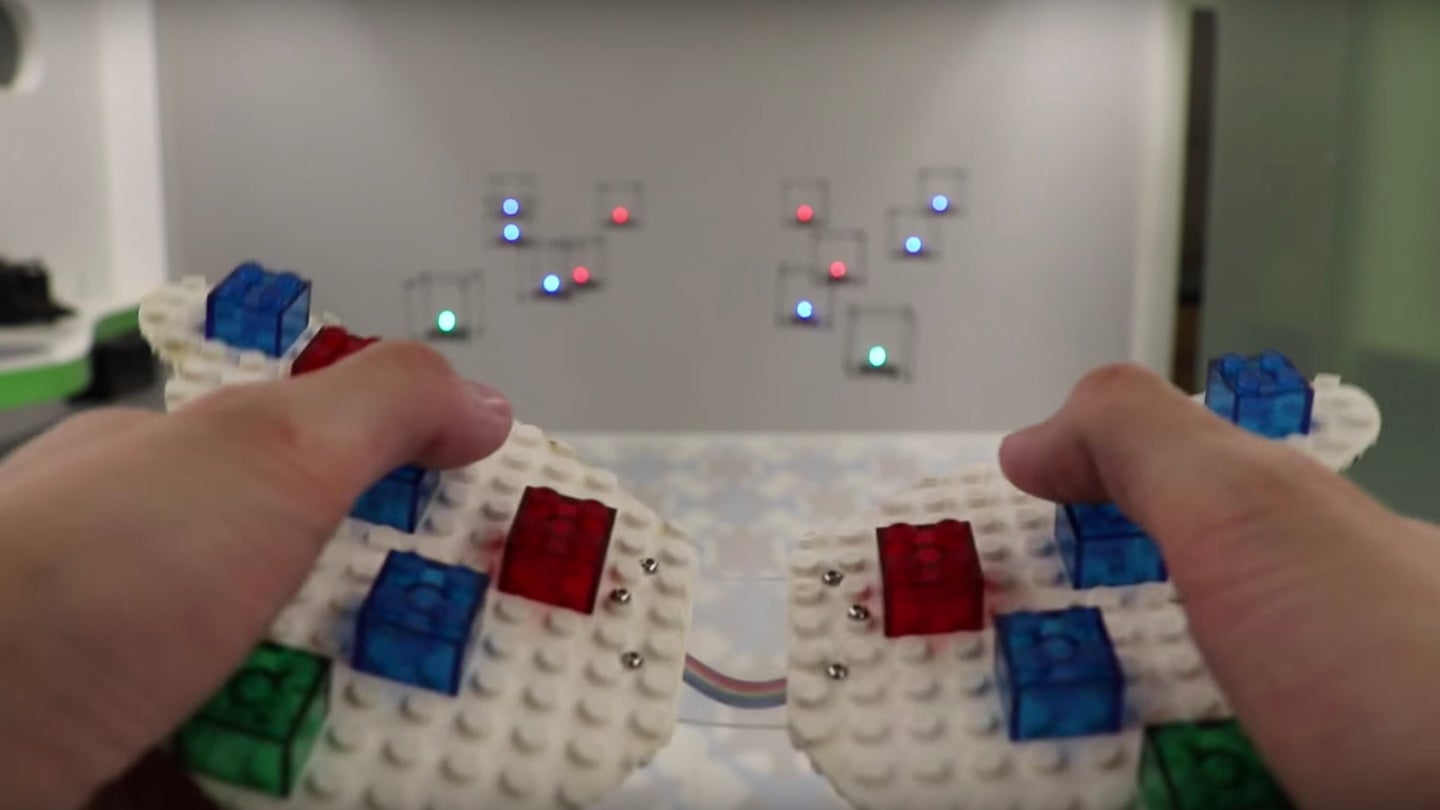 If Legos were a formative element of your childhood, and you’re currently an active drone-enthusiast, then these flying Lego bricks on display at the Lego World expo in Copenhagen last month most likely tickle your fancy. Using quadcopters to recreate aerial Lego patterns, the company’s "Creative Play Lab" partnered with Canada’s Queens University to bring the world-renowned toy blocks into the future. This new in-house system essentially allows users to design and manipulate a Lego brick controller, that is then scanned by computer vision and serves as a controller which the flying swarm of quadcopters mimics in real time.

According to CNET, the drones and controller are fitted with small gyroscopes and sensors that track the user’s input, telling the UAVs to keep up with the controller’s movements. This lets the mini-drone swarm follow suit with whatever you’re telling it to do. The drones themselves are fitted with LEDs that display numerous colors with the swarm reconfiguring itself into various shapes. While this isn’t anything you can currently purchase yourself, the Lego Creative Play Lab is reportedly curious as to the drone system’s educational value for young students of physics, which could feasibly result in Lego’s new tech finding its way into the classroom.

“Imagine us interactively reconstructing the movement of planets around our sun or distant stars in the Milky Way galaxy,” said Roel Vertegaal, professor of human-computer interaction at Queens University and head of its Human Media Lab which designed the system. “With this technology, we are able to simulate the physics of the natural world like gravity, planetary orbits, and more, giving children a chance to see what they have long learned from textbooks and two-dimensional depictions, in a real physical environment.”

Let’s take a closer look at the flying Lego bricks in action, courtesy of the Human Media Lab, shall we?

Legos provided me and countless others with a wealth of joy and entertainment as a child and genuinely got me thinking in regards to architecture and design. You quickly learn what is and isn’t feasible when it comes to, admittedly basic, construction, and that definitely sparks the imagination. It’s great to see the company keep up with the times and ponder all the educational value of modern drones when fused with classic Lego culture. Hopefully, we’ll continue hearing more about this project and its plausible implementation into schools, as opposed to never hearing about this again. We’ll certainly keep an eye out and report on any developments. Stay tuned.

Riga Is Becoming a Latvian Haven for Drone Manufacturing and Racing

Riga isn’t a city we hear about often, if at all, when it comes to the drone industry. Recent developments, however, suggest that this may change.