The Millennium Falcon Is Dead

From mothballs to hyperspace? Only in a galaxy far, far away, says our resident greasemonkey. 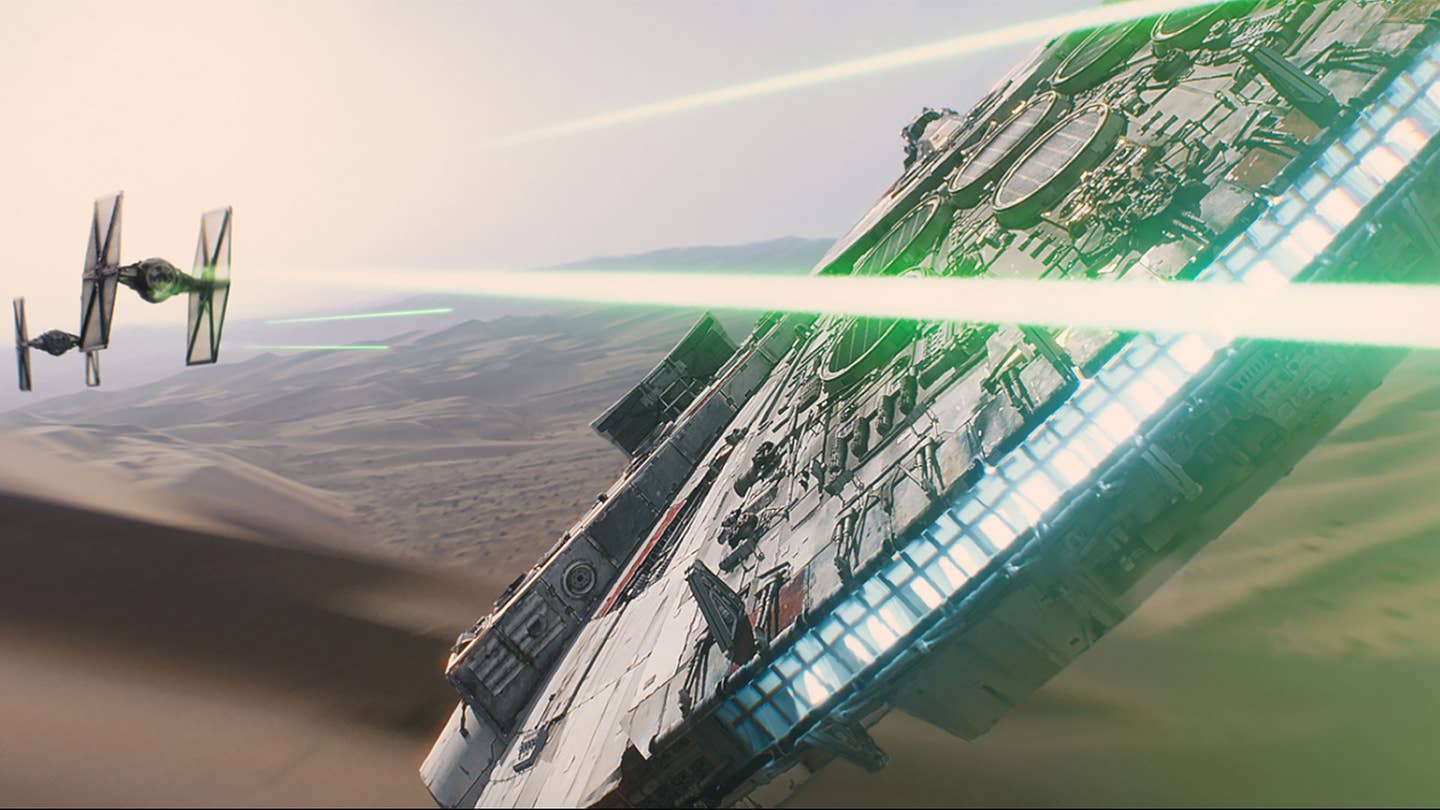 Caution: If you have not seen Star Wars: The Force Awakens, you may want to stop reading now. I'd hate to be the one you come after with a Hasbro lightsaber.

Anyway, if you're one of the Chewbacca-growling horde that has already flocked to theaters to see the movie, you will have noticed that the vaunted Millennium Falcon is back in action. That's right, the fastest hunk of junk in the galaxy, the one that made the Kessel run in less than 12 parsecs, the one that General Motors VP Mark Reuss might have dubbed “the Big Nasty” had he not already bequeathed that honorific on the Corvette Z06, was ripped from beneath a tattered cover and flown from dusty hibernation into almost instant high-speed action.

Not that we need to take everything that happens in Star Wars all that seriously. (Otherwise, Han Solo, Princess Leia and Chewbacca surely would have transformed into pink mist when, in The Empire Strikes Back, they stepped out of the Falcon and into the gullet of a giant space worm on the surface of a large asteroid that certainly didn't have the same gravitational pull and atmospheric pressure as their home planets, right?) However, as a mechanic, I have to question the wisdom of taking a complex spaceship that's been collecting sand and grit for years on end directly into combat maneuvers without any kind of mechanical preparation whatsoever.

Quite simply, it can't be done. A few facts, dug up on both Wookiepedia and Wikipedia, will illustrate what I mean.

At the time Rey and Finn—two of the main characters in The Force Awakens—stole the Falcon from Unkar Plutt, the ruthless junk boss on the scrapyard planet of Jakku, it had apparently been sitting under a ratty tarp for some years. The Falcon, a Corellian Engineering Corporation YT-1300f light freighter, had two other owners between Han Solo and Plutt, and both had made dubious modifications to the ship. As we were to see later, their shoddy workmanship (or lack of understanding of hyperdrive systems) caused a few problems.

But that's only the beginning. Here's a short list of other issues that would have made it impossible to fly a mothballed Falcon:

There is little Information on the shelf life of the ship's power core, but on a vessel that small, let's assume that it wasn’t exactly Avatar-grade unobtanium. After numerous hyperspace flights between various star systems and many battles with huge Imperial cruisers, the power core would have therefore been heavily taxed. Did Plutt keep it on a trickle charger on Jakku? I doubt it. His planet was was a wreck, and his personal setup somewhat worse. Even the privileged on Jakku lived hardscrabble lives. My guess is that every available drop of energy was used for more vital functions than keeping the charge on an unused freighter topped off.

One needs only to take a gander at the U.S. Air Force Boneyard at Davis-Monthan Air Force Base in Tucson, Ariz., to realize that firing up a mothballed aircraft is more complicated than just climbing in and pushing some buttons. First, see item No. 1. Granted, the climate on Jakku is probably similar to that of the Sonoran Desert, where the U.S. Government deposits all its unused planes. Low humidity and hard, alkaline soil make for non-corrosive storage and ease of movement without the need of paved surfaces. But even aircraft stored intact would require preparation to make them flight-ready again.

The Millennium Falcon was not administered by the U.S. Air Force, or even the Galactic Empire, which would have been every bit as organized. It was owned by Plutt, a disheveled junkyard manager with no pride in the appearance of his person or his environment. Our guess is that he would have sold parts off the ship whenever someone presented the right amount of cash. With that sort of an owner, how was it even complete?

Chances are that Rey and Finn would have crashed the Falcon in two or three seconds flat, and that's if they'd even managed to get it off the ground at all. It seemed that Rey had gained some knowledge of older craft from her years scavenging parts from old star destroyers, but technical know-how doesn't equal flight time. Even if she had flown some old junkers in the desert from time to time, flying a Curtiss Jenny ain't the same as firing up an old F-15 Eagle. My guess is that the differences between the crap cans she was used to flying and the Falcon—a certified muscle spaceship—would have been about the same.

Then again, I could be wrong about everything. Rey figured out the Force pretty quickly, so maybe she could just feel a spaceship to fly one. And perhaps Unkar Plutt was only a one-dimensional skinflint on the surface, maintaining the diamond-in-the-rough Falcon on his back lot in case of war or extraordinary smuggling opportunities. If so, Rey and Fin were very lucky to stumble upon her—and fly her even deeper into Star Wars lore.