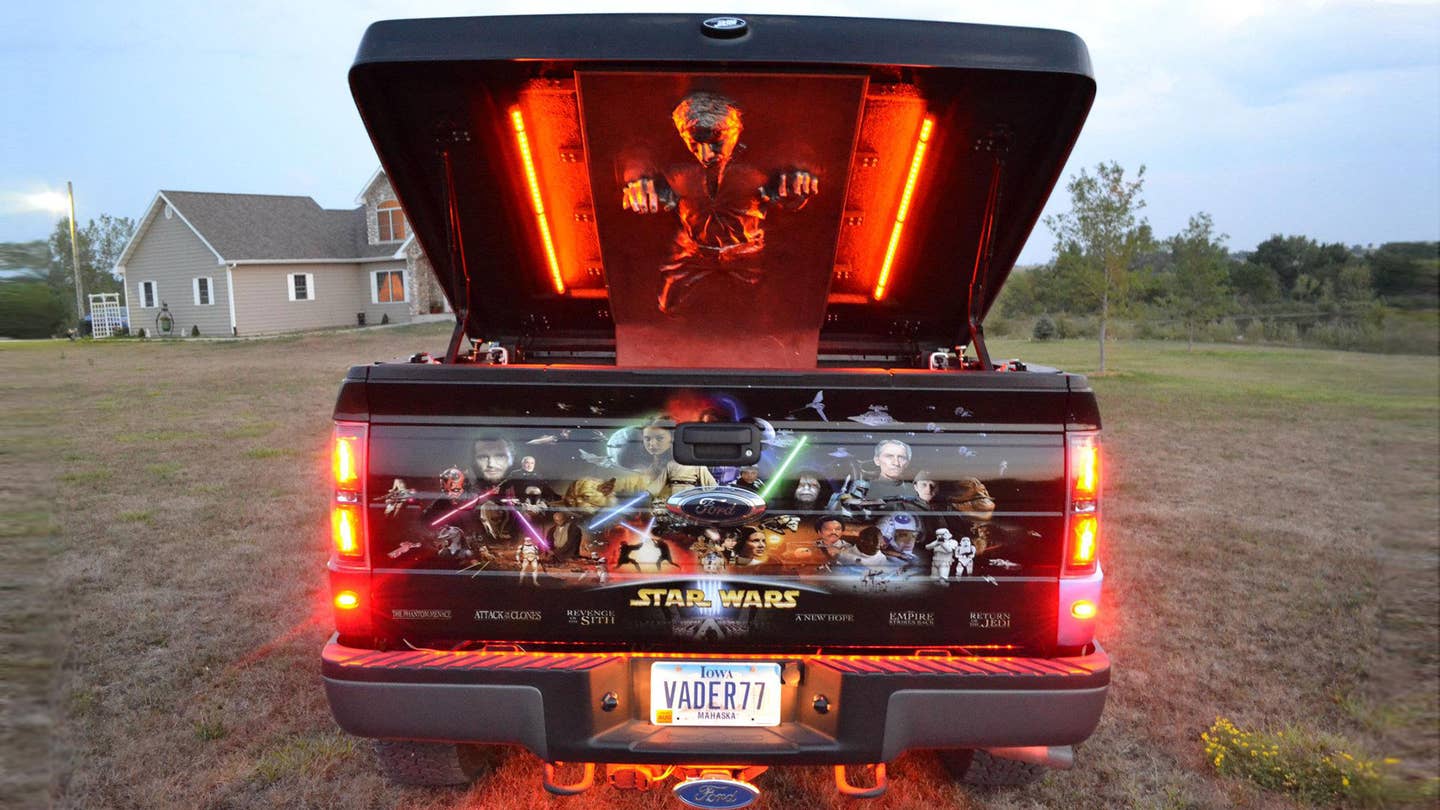 It’s one thing to dress like your favorite Star Wars character, it’s another to invest hundreds of hours or thousands of dollars customizing a car as a tribute to the extragalactic juggernaut. This list of Star Wars-inspired one-off custom cars isn’t cosplay. It’s carsplay. And it’s incredible.

Start with a passion for the Rebel Alliance, a Honda Civic Del Sol, recycled garbage and a keen eye for detail and add years of time and this is the impressive result. Painstaking attention was paid to everything from the dual side-mounted laser canons to the scale R2D2 poking out of the boot. The build was the labor of love of owner Shawn Crosby (or “Obi-Shawn,” per his vanity plate). It’s safe to assume Crosby won’t stray to the dark side; he uses the fighter to raise money for children.

This X-Wing won’t help you take down the Death Star, but it will turn some heads at the grocery store. The 1992 Mercury was campaigned twice in the Dumball Rally, which is exactly what it sounds like. The wings - and those glorious ski pole tips - fold, in case your parking berth is smaller than a proper X-Wing’s. The advantage of using a 111,000-mile beater as a base for a replica? A spritz of black paint and cosmetic damage becomes a battle wound.

This ingenious soapbox car cost only $75 and a fair amount of elbow grease. While this T-65’s wings don’t move, R2D2’s (styrofoam) head does swivel around, due to a small motor from a girl’s toy, jerry-rigged to an NES controller. Hit A or B and Artoo freaks out, complete with noises piped through hidden speakers. Badass. The builder posted instructions, should you want to build your own.

There’s, uh, a lot going on here. Before you cry sacrilege on behalf of this innocent 2014 Ford Raptor, take a minute to appreciate the sheer ridiculousness of this impressive wrap job. If you’re going to show your allegiance to the tyrannical Galactic Empire, go big or go home. And apparently go neon. The best feature on the truck is a slab of “carbonite” with a frozen Han Solo under the hydraulic bed cover. After all this, dude better have a cryo effect firing when that lid raises.

The beloved teetering, chirping droid has been translated into many products and forms, though this Vespa version is one of few scooters to bear its likeness. The transformation only required some adhesive vinyl, exacting cuts and a steady hand. The fifth-grade teacher and self-proclaimed “Star Wars nerd” who birthed this enjoys the attention it brings. As he should.

This show car debuted last month at the Los Angeles Auto Show, a product of Garage Italia Customs at the behest of Fiat. Inspiration for the design of the electric number was drawn from the armor of the First Order Legion. The effect was realized by black wraps on the windshield and side windows, and a two-tone black and white custom paint job. From a number of angles, it does look like a Stormtrooper’s helmet, though we’re more taken with those white wall Pirellis. Here’s hoping the Fiat doesn’t bump it’s head on any (garage) doors.

If you’re a toy car manufacturer trying push sales of your Darth Vader car, why not make a life-size, drivable counterpart of your handheld model? Even better, start with a C5 Corvette chassis. This perfect mimic has been road tested to 80 mph, though the designers claim it can handle 150 mph without issue, thanks to the C6’s LS3 V8 under the swooping bonnet. It also features glowing lightsaber side pipes and custom milled wheels with tasteful red trim. The canopy opens as Vader’s helmet does, complete with smoke effects. Finally, it breathes thanks to a sound effect system controlled via a tablet.

The only entry on this list capable of flight, we have Japanese airline All Nippon Airways to thank for this fabulously appointed commercial Dreamliner. Beyond the outer decor, the interior features themed headrest covers, cups and napkins which all feature different Star Wars characters. This jet is the first of three ANA will roll out as part of a five-year promotional deal with Disney. Up next is BB-8, a new character introduced in The Force Awakens. BB-8 will adorn a Boeing 777 and is expected to enter service early next year.

Every bit of this 1:1 scale was fabricated from scratch. Daniel Deutsch, who cut his teeth as a creator of droids and animatronics for LucasFilm and Disney, poured his all into this drivable iteration of Luke Skywalker’s craft. It’s electric drive system sits between an aluminum chassis and the fiberglass body Deutsch painted flawlessly. The top speed - 25 mph - belies its name, but no matter. Behind this wheel, you’ll want to go slow enough to sate the gawkers.

Take a 1977 Dodge Tradesman van and slap another Tradesman on the back and you’re winning at life. Blanket the behemoth six-by in a stunning Star Wars mural and you’ve officially won. Dubbed “Battlestar,” it’s a total Frankenvan. That bespoke headlight configuration is comprised of eight Monte Carlo lamps, while ‘67 Mercury Cougar taillights, installed vertically, bring up the rear. The paint is factory Camaro, and there’s a custom wing, roll pan and front air dam. And yes, there’s a queen bed in there, in case you’re feeling amorous after saving the Galaxy. Though, it’ll probably take some serious boot-knocking to get a three-axled van rockin’.