Arriving in a stretched Town Car is passé. Let's get weird. 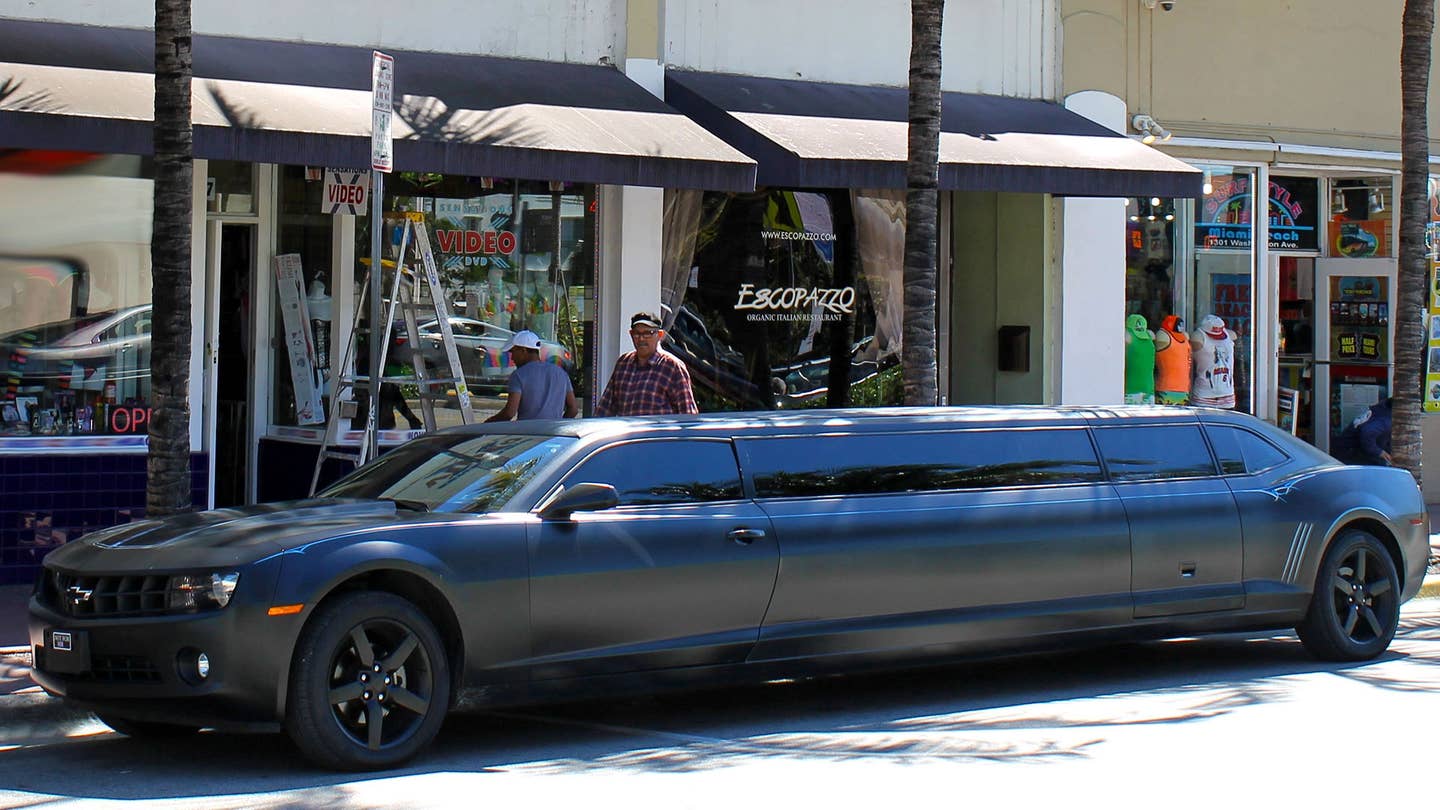 Try as the show’s producers might, the Academy Awards is still a largely boring affair. Same goes for the chariots ferrying Tinseltown’s brightest and whitest: dull, predictable and staid. Wouldn’t it be wonderful if everyone eschewed elongated Cadillacs, Lincolns and Chryslers in favor of something with distinct style? If the glitterati opted for transports that matched the ethos of their talent, or recalled the work that garnered the evening's invite? We have some suggestions to make the arrivals the best part of Sunday night.

Nominated for helming the emotionally-fraught Room, Larson’s star is rapidly rising. As such, she deserves wheels equally quick, formidable and comely. Like, a stretched, matte black Camaro. Given the added steel, this eight-seat, rear-wheel-drive behemoth may not be as fast as the traditional LS-powered coupe from which it was cut, but it does offer sporty gullwing doors in the rear. Gullwing doors add speed. Want a Camarousine of your own? A bright yellow 2015 iteration, with a mere 7 miles on the odometer, is available for $98,000.

Bale, up for his supporting stint in The Big Short, is renowned for method dives into demanding roles. Like some of those moody characters, Bale harbors an unrepentant psychopath beneath a demure exterior, one ready to be unleashed on any foe or unfortunate lighting tech. This mid-Eighties, redneck-spec, Cadillac Fleetwood lifted-limo embodies the duality of Bale: elegance atop unforgiving monster truck underpinnings. With the roomy Caddy interior, there’s plenty of space for Bale’s ego; with the oversized tires, Bale could literally crush the competition come Oscar night. Aside from that errant purple stripe, this beast is grand.

Stretching this pristine TriFive into perfection must have been a labor of love. Presumably the 4.3-liter V8 that came stock in the iconic Bowtie has been swapped out for something with a little more oomph, though the rest of the interior appears to be period correct. Lawrence, nommed for Joy, would be at home in a loud, commanding, classic ride, because those attributes typify her. Plus, the flames adorning the hood are ideal for the Girl on Fire.

This multi-axle Rover emerged from a coach-building outfit out of Bristol, England called Glenfrome Engineering. In the Eighties and Nineties, they were tapped by Land Rover to craft several variants, including this three-foot wheelbase extension with a third free axle, dubbed the Saha Six. With additional chassis rails and cross members, Glenfrome’s works were as sturdy, if not stronger, than the original Rovers. The roof consists of two meticulously-welded Rangie roofs, donated from convertible conversions. With red paint and that boxy body kit, this 6x4 model befits Damon, nommed for The Martian, because it looks like it too would be at home traversing the Red Planet.

Mara got a nod for her performance in the 1950s period film Carol, so we recommend she opt for the apex of mid-Fifties luxury, the Crown Imperial limo. In 1955, only 172 were built: the last Chrysler limos to be fabricated wholly in Motor City. With a 6.8-liter Wedgehead V8 providing the power, these sleds were as much fun to drive as they were to ride in. In the back of an opulent Imperial, Mara would turn all the heads, eyes torn between the actress and those pristine whitewalls inching towards the red carpet.

The beloved, idiosyncratic brothers are nominated for the script of Bridge of Spies. Given their quirky sensibilities and the film's setting in fractured Cold War Germany, an East German-built Trabi XXL is the only option. Here, the base vehicle, the two-door, 600cc Trabant 601 (oddly called a “Limousine”), has been gutted in order to accommodate five passengers. An extra set of wheels helps to handle the increased weight. As the original Trabi’s cozy width and height remain, larger folks will be in for a tight squeeze. But the Coens won’t mind: they’ll be too busy thinking about how to showcase the limo in an artfully bleak forthcoming project. Should you want to experience a Trabi XXL first hand, head to Berlin, where they are the ultimate taxi.

Though the eco-crusader's authority has been well undermined by his private jet usage, Leonardo DiCaprio, nommed for The Revenant, continues to putter around in a Prius. But you can’t fit the Pussy Posse in a compact. Enter the Primo, a limo amalgamation concocted of two damaged Priuses. That warped bubble in the middle isn’t the result of Photoshop; it’s a byproduct of this seven-seater's birth viaf an Indiana salvage yard owner. The green machine purportedly nets about 50 mpg and, like any medium crossover, is a cinch to drive and park. It’s all too easy to picture a smug DiCaprio emerging from a Primo, despite the fact that his Oscars performance is usually more secondo.

Redmayne exudes poise, grace and elegance. So did Bentley’s 8 Litre, especially when the coachwork came from Mulliner, as with this 1930 Weymann stunner. The British actor, nominated for The Danish Girl, belongs in a fetching Winged B. This was the last entirely original model produced before financial ruin compelled Bentley’s sale to Rolls-Royce, and featured a straight-six forged from a solid block of iron. Redmayne would look smashing in the back.

This 2008 ginormous dually is accurately billed as a “Hummer Killer.” It’s a 24-seater, diesel-powered, fender-flaring homage to America, able to beat anything it comes up against—much like Stallone’s Rocky Balboa. Reprising the prized boxing champ role for Creed netted the action star a supporting actor nod. What better way to show the world you’re still king of the acting ring by bumping up to the Oscars in this giant, “Eye of the Tiger” blasting?